A ReachTel poll carried out for the left-leaning think tank, the Australia Institute, on Wednesday night gives Sharkie a lead of 59 per cent to 41 per cent on a two-party preferred basis – the exact figure in an YouGov-Galaxy poll published in The Advertiser on Monday.

The Greens are leading Labor on primary votes – 6.8 per cent to 5.8 per cent – and both parties are preferencing Sharkie.

Despite a high-profile campaign and support from a parade of Federal Government ministers, the Prime Minister and former PM John Howard, Downer has failed to move the polls.

In June, three polls in a single week – separate ReachTel polls for Channel 7 and the Australia Institute and a Galaxy poll for The Advertiser – put Sharkie ahead by 58 per cent to 42. In late June, another ReachTel poll had her lead blown out to 62-38.

Only a small percentage of voters in this latest poll were undecided – 2.7 per cent. Even among these voters there’s little good news for the Liberals: 31 per cent are leaning towards voting for Labor candidate Reg Coutts, 23 per cent for Downer and 7.7 per cent for Sharkie. 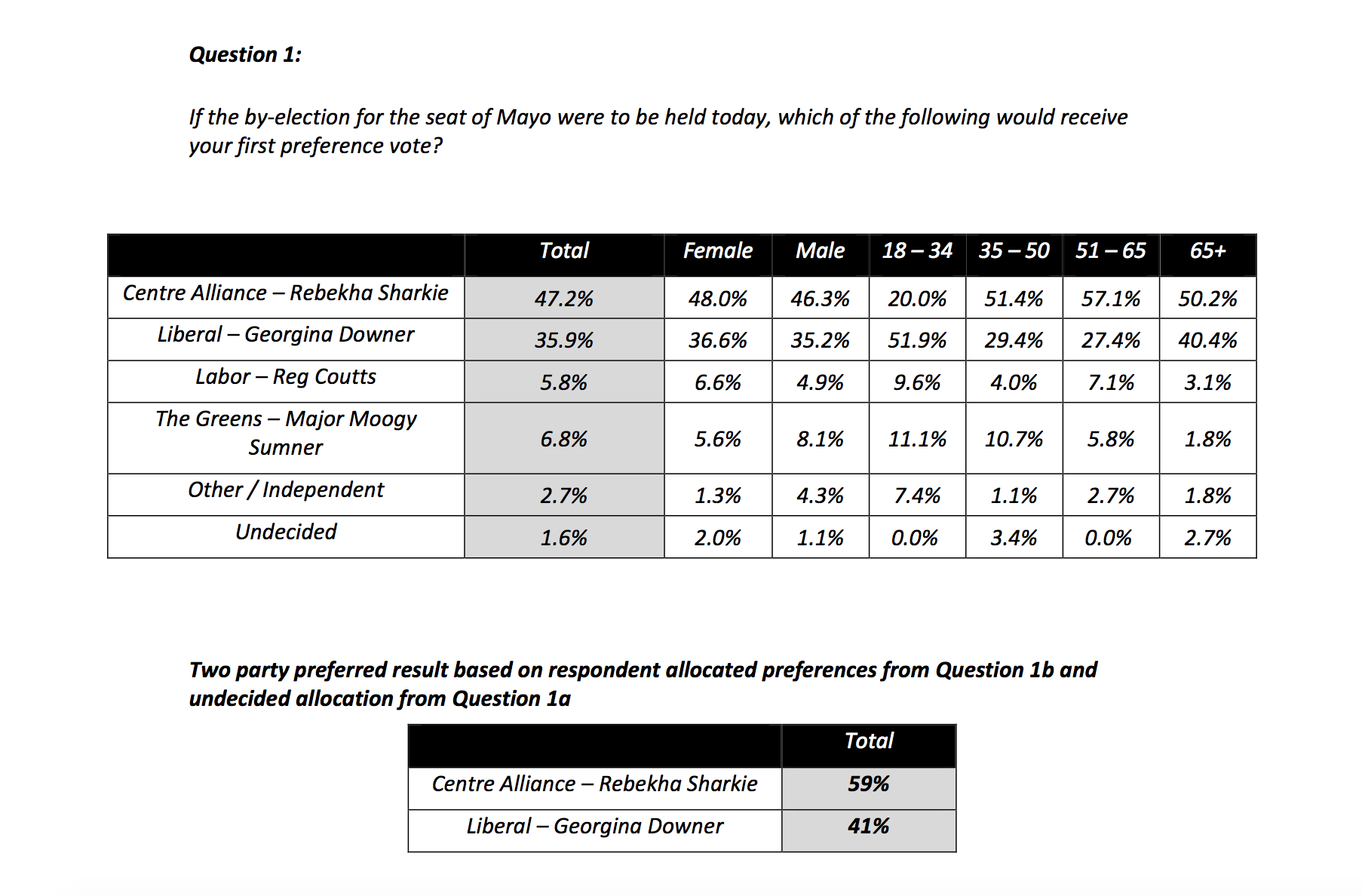 The results of the ReachTel poll conducted for The Australia Institute this week.

Sharkie won the seat for the then Nick Xenophon Team in 2016, defeating Liberal minister Jamie Briggs. She resigned from Parliament in May due to doubts over her citizenship status at the time of her election.

Downer has been campaigning hard to connect Sharkie with Labor leader Bill Shorten, highlighting her voting record on issues such as company tax cuts.

The Australia Institute poll found that just under 28 per cent of Mayo residents supported company tax cuts for large business.

“When you have a crossbencher in, you instantly create a marginal seat no matter what percentage they hold the seat by,” she says.

“You also get somebody who is there entirely for the electorate that’s not wedded to party lines.”

Downer says she isn’t thinking about a potential loss.

“I’m intending to win tomorrow,” she said. “I’m putting everything into it.”

– with additional reporting by AAP