The group – known as the Aunties – has been commissioned by the Department for Child Protection to conduct community consultations with kinship and foster carers to develop a plan to keep children aged from birth to three years connected to Aboriginal culture when they are removed from their families.

“If you’re removed from a sense of cultural identity and belonging and the sense of Aboriginality then it’s very hard to get back,” Ngarrindjeri woman and Aunties facilitator Deb Moyle said.

“I’ve spent 40 years regaining my sense of identity and being grounded.”

Moyle spent the majority of her early years in the care of her grandmother in Bow Hill, but was removed from her extended family by child protection authorities when she was four-years-old to live with her non-Aboriginal father in Perth.

“I had blonde hair, blue eyes (and at that time in the late 1960s) …. a lot of children were still being taken away because of the colour of their skin,” she said.

While she was in Perth, Moyle said she endured a decade of abuse. When she approached Western Australian child protection authorities, she was placed in a children’s home.

With the help of local politicians, Moyle’s mother successfully advocated for her return to her Aboriginal family in South Australia when she was 14-years-old.

“As soon as I returned home to Adelaide, people started recognising me and I gained that sense of identity and belonging, because I was walking in my mother’s country.

Moyle said she was motivated by her childhood experiences to improve the lives of Aboriginal children in the child protection system.

Data from the Report on Government Services (ROGS) shows there is a worsening proportion of Aboriginal compared to non-Aboriginal children being drawn into the child protection system.

“The department are doing the best they can with everything that they’re going through and what we’re saying as a group is simply ‘how can we help?’,” Moyle said.

“There comes a point in time when the Aboriginal community also has a role to play and it’s not about pointing the finger on which agency is doing well and which isn’t – it’s basically saying, ‘What can we do as a group of Aboriginal women, how can we help?”

Uniting Communities senior support manager Cheryl Hillier, who has helped Aunties consult with the department and establish a formal association, said the Department for Child Protection’s openness to hearing from the Aboriginal community was a “positive step”.

“The stats show that Aboriginal children are disproportionately in out-of-home care and a significant percentage currently are not in placements that enable them to remain connected to their culture,” she said.

“Our view in this space is, Aboriginal workers are the ones we need to listen too – they will be doing the scoping, working and advocacy.”

Consultations are currently underway across metropolitan and regional South Australia.

The group has also commissioned researchers from the University of South Australia to do background research on literature and policy models used by other jurisdictions.

“There are little things – like one of our elders was saying when an Aboriginal child is born with the likelihood of removal, then we give them a letter from an elder saying they’re Aboriginal and they were born on Kaurna country or wherever, and that they were loved.

“One elder was saying I want to just be able to come and spend half a day or just a couple of hours reading a book to a child so they can learn about culture that way.

“It’s about showing the wider community that Aboriginal people are not just passive recipients to what’s happening and we’re not just complaining. We need to set up some mechanisms so that we’re helping.” 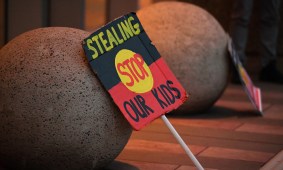 Moyle said consultations will finish in August and a plan would be presented to the Department for Child Protection by October.

Aunties plan to formalise their association – to be called The Legacy of Trust and Hope – in September.

They also plan to fundraise to establish trust funds for all South Australian Aboriginal children when they leave state care.

“We’re not talking about a lot of money – just a bit to make them feel empowered about their decisions, whether it’s a laptop for uni or a licence or a bond to pay for a house,” Moyle said.

“Every child needs some core skills and if they’re getting welfare from a system for 18 years and then they leave the (child protection) system, why should they then live with welfare for the rest of their life?

“It’s not a self—fulfilling prophecy.”