Latest data from the Australia Bureau of Statistics shows South Australia is lagging behind the rest of Australia when it comes to internet access, with 82.5 per cent of South Australian households accessing the internet compared to the national average of 86.1 per cent.

He has called on the State Government to implement its digital inclusion plan, sent to SACOSS before the March election.

“People may not be using the internet for a variety of reasons, including barriers to access, affordability, lack of digital skills or not knowing what is available and possible online,” Womersley said.

“They might struggle to find jobs, get services or stay connected to friends and community – or they may pay more for services as banks, utilities and governments often give discounts or privilege online payment or access.”

Womersley said governments and businesses ran the risk of “ignoring or disenfranchising” the 15 per cent of South Australians who don’t access the internet. He said the fact South Australia’s household internet use falls behind the national average highlights the need for a government strategy. 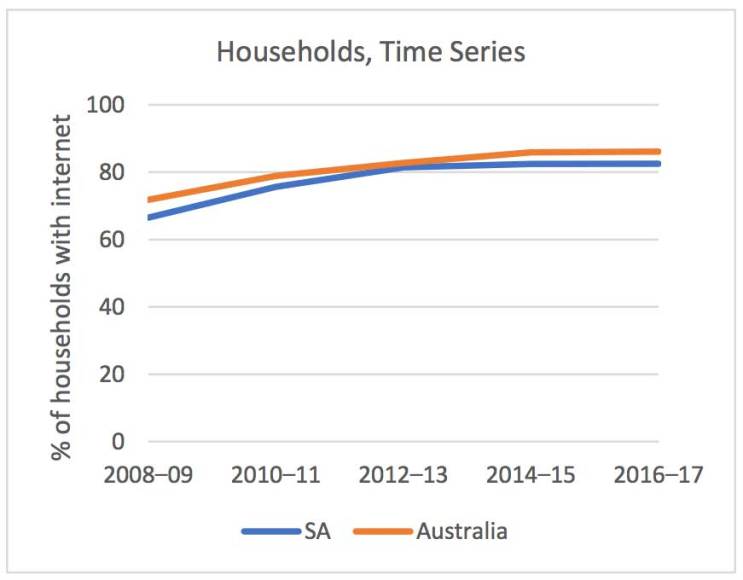 In a pre-election letter sent to SACOSS, the Liberals outlined a digital inclusion plan, which includes measures such as an audit of free WiFi locations, evaluating free public transport WiFi, approaching the Federal Government for funding assistance to “fill gaps” and ensuring that state government websites meet design guidelines so that they are fully accessible to people with disabilities.

The letter also stated the Liberal Party supported the principle of free access to South Australian Government websites and promised that, if elected, it would monitor digital access, download speeds and free WiFi access across the state to determine which areas need to be prioritised.

Job-seeker Wendy Egan, who relies on just three gigabytes of mobile phone data per month for her home internet access, said the government should act to introduce internet subsidies for people on pensions and low incomes.

The disability pensioner has been job-hunting for five years and relies on free WiFi to support her voluntary work, job applications and keeping in touch with friends.

“I just can’t afford internet right now as I’m already paying $50 per week on food and with my pension everything has to be on a tight budget,” Egan said.

“Right now I basically library shop – I’ll walk from my place to Burnside library which is half an hour away and there I can use a computer for up to three hours. After that I have to walk somewhere else like Unley library if I want to have more time.

“I’m going from one library to another (and) it’s like being a traveller on the road and even then I’m not guaranteed a computer when I get to the library and might have to wait an hour.”

Egan said her limited internet access was “socially, psychologically and financially very limiting” as she is unable to keep in touch with people regularly and often has limited time to complete her online job applications.

“You’re forced to do things that wouldn’t be a problem if you had available internet access at home,” she said.

“I live on my own and when I was sick with the flu for two weeks I was stuck eating all that I could find in my cupboards because I couldn’t go out to get food or go online to get food delivered.