The analysis, by local data company Pernix, suggests Adelaide’s CBD will leap from having an average internet service among the slowest and most expensive in the world to, by far, the fastest and cheapest.

Pernix founder and CEO Cully Cullinan said the analysis was based on multiple data sources and an assumption that 500 businesses would take up an internet service on the Adelaide City Council’s Ten Gig City fibre-optic cable network, which is being rolled out to commercial buildings across the CBD.

A graph (below) summarising the company’s findings was presented to a council committee meeting last night.

It favourably compares average Adelaide to several countries and one city – South Korean capital Seoul, which is considered the global leader for internet speed. 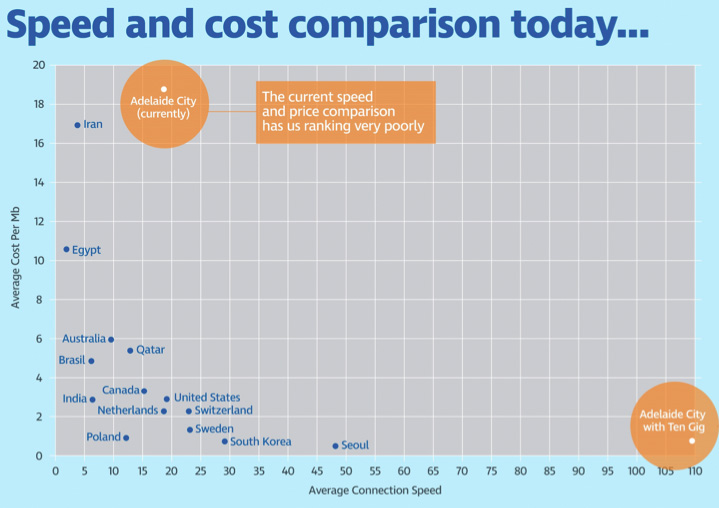 The analysis, commissioned by the council, was based on datasets from web performance analysis service Ookla/Speedtest, cloud service provider Akamai and global management and consulting firm AT Kearney.

Cullinan told InDaily Adelaide was “amongst the most costly and (the) slowest” cities, for average internet service, in the world.

“After the subscription (of 500 businesses) we’ll definitely be fastest and cheapest,” he said.

He added that Ten Gig City had provoked an “arms race” of internet and data transfer technology among some cities internationally.

University of Adelaide emeritus professor of telecommunications Reg Coutts said it was credible that Adelaide could achieve an average speed of 110 megabits per second, as the analysis predicts.

“That sounds pretty credible,” he told InDaily this morning.

However, he said the collation of internet speeds into a single average for the United States in the analysis was misleading “marketing hype” because of the wide variety of service performance in different parts of that country.

“The average speed in the US is almost meaningless,” he said.

“Particular cities (in the US have) the same sorts of speeds as they’d be talking about (in Adelaide).

“You can’t compare the average of a city with a country.”

In December last year, the Adelaide City Council announced it had signed a deal with internet service provider TPG, allowing it to use the city’s network of ducts to install fibre-optic cable in the premises of about 3500 businesses within 1000 city buildings at no cost to those businesses.

The network is not offered to residents.

The council spent “in excess of $10 million” – according to Lord Mayor Martin Haese at during announcement last year – on the deal.

The council’s associate director for information management, Peter Auhl, said Ten Gig City was able to offer extraordinarily high speeds because businesses would have access to their own individual fibre cable in an “uncontended network where no customer will interfere with another’s performance”.

An infographic, also presented to the council last night, explains how the service works. Image supplied.

The council now says it has “pre-commitments” to install the fibre-optic cable in 700 city buildings with 400 city businesses registering interest in taking up the service.

The council’s IT team expects to secure pre-commitment from the owners of 1000 buildings by the end of this month.

Businesses that miss out on the initial installation rollout could be liable for large costs – potentially around $30,000 – to have the fibre installed thereafter.

Auhl said Ten Gig City was useful not only because of the ultra-fast internet services it will offer, but also super-speed data transfer services with synchronous upload and download capability.

He said the network would be particularly attractive for businesses in the medical, advanced manufacturing, defence and film industries, and would help local businesses expand their offering to international service export markets.

Auhl said Adelaide had competitive advantages over many cities across Australia and the world when it comes to rolling out fibre-optic cable networks because of the CBD’s grid pattern and flat topography.

“This is the first time infrastructure like this has been rolled out across the city,” he said.

“We’ve got quite a competitive (advantage …) that allows us to deploy this type of infrastructure.”

He said the service was complementary to the National Broadband Network, which is installing a fibre-to-the-kerb network for residents (and some businesses) in Adelaide’s CBD.