The new State Government, which was elected on a policy to scrap the rebuilding of Adelaide’s tram network except for a possible new city tram loop and extension to North Adelaide, won’t commit to releasing any part of the long-running study.

Shortly before the state election, then Liberal transport spokesman David Pisoni questioned why the Government had not released the business plan for the proposed expansion of the tram network.

“There’s only nine days to the election and they still haven’t released this document,” he said. “They said they would release it.”

Pisoni, who no longer holds the transport portfolio, said at the time that South Australians could not have an informed debate about the trams – including the controversial King William Street/North Terrace junction – without the business plan.

Now that the Liberals are in Government, they are questioning the wisdom of releasing the full analysis.

Before the election, the Labor administration decided against releasing the modelling for most of the proposed tram routes, fearing political fallout. Instead, as reported exclusively by InDaily, it distilled this modelling into consultation documents on its favoured tram extensions to North Adelaide, the eastern suburbs via Norwood, and a CBD tram loop – the least contentious of the proposed new routes.

The full business cases for these routes, plus detailed work on proposed routes to the western suburbs, Port Adelaide and West Lakes, and south to Mitcham, have never been released, despite Labor’s transport minister Stephen Mullighan promising on numerous occasions to release the study in 2017.

In response to questions from InDaily, the new Transport Minister Stephan Knoll said the Government was considering which documents would be appropriate to release publicly.

“The new State Government will establish the South Australian Public Transport Authority (SAPTA) which will develop and deliver a better public transport network for South Australians,” he said in a statement.

“There are dozens of documents associated with the previous administration’s business case for extending the tram network. There is not one final business case document.

“Some of these documents have been released and we will be working through the remainder to determine what would be appropriate to release given some of this work could be used to inform SAPTA in the future.”

InDaily understands that the Government holds very detailed modelling on all of the previously suggested extensions, including favoured routes, traffic impact data and proposed stops based on detailed analysis of land use (residential density, business activities and the like).

InDaily also understands that an overarching business case covering the entire network was not completed before the election.

The original proposal to rebuild Adelaide’s tram network was contained in the Labor Government’s integrated transport plan, released in 2013.

That plan included indicative routes (see below), but the $4 million study was commissioned to refine the route plans in consultation with local government and others in the community. 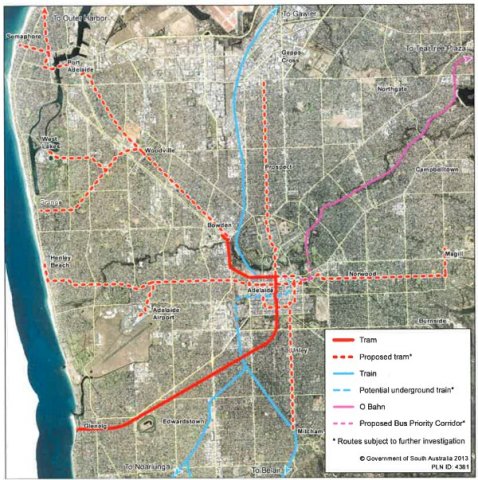 Before the election, the Liberals released a transport policy, saying trams are “not viable, workable or needed beyond the Adelaide Parklands and North Adelaide, except for the existing Glenelg line”.

The Liberals also vowed to build a right-hand turn for the trams from King William Street to North Terrace – a move that Labor argued was expensive and unnecessary.

He said the Government was running behind its own schedule for the establishment of a new body to oversee infrastructure development in South Australia.

“I think they want to lower expectations of them developing any infrastructure at all in terms of public transport or roads,” he said.

Works are still underway to extend the city tram network to the Festival Theatre and east along North Terrace to the old Royal Adelaide Hospital site.