The review comes as new figures reveal the pace of carbon emission reductions in Adelaide is slowing.

Asked whether the Marshall Government would maintain its predecessor’s ambition – and its pact with the city council – to make Adelaide a carbon neutral city, Environment Minister David Speirs said his department’s programs would be reviewed ensure they deliver “practical environmental outcomes”.

“It’s business as usual for the Environment Department until we’ve had a chance to review programs to assess their effectiveness,” Speirs told InDaily.

“I have always said that the Environment Department must deliver practical environmental outcomes for the people of South Australia and that will ultimately be the threshold question.”

However, reducing carbon emissions wasn’t included in a list of the Government’s “environmental priorities” proferred by Speirs, which included “natural resource management reform, our coastal protection plan and increasing the number of park rangers”.

In implementing the agreement, the council has since endorsed the distinctly less lofty target of being “one of the world’s first carbon neutral cities by 2025” whereas the former Government had maintained the “world’s first” target without a specific deadline.

The City of Melbourne aims to be carbon neutral by 2020 – though unlike Adelaide, the Victorian capital has yet to “de-couple” its carbon emissions from GDP growth.

An official inventory of carbon emissions from the CBD and North Adelaide was presented to last night’s Adelaide City Council meeting. 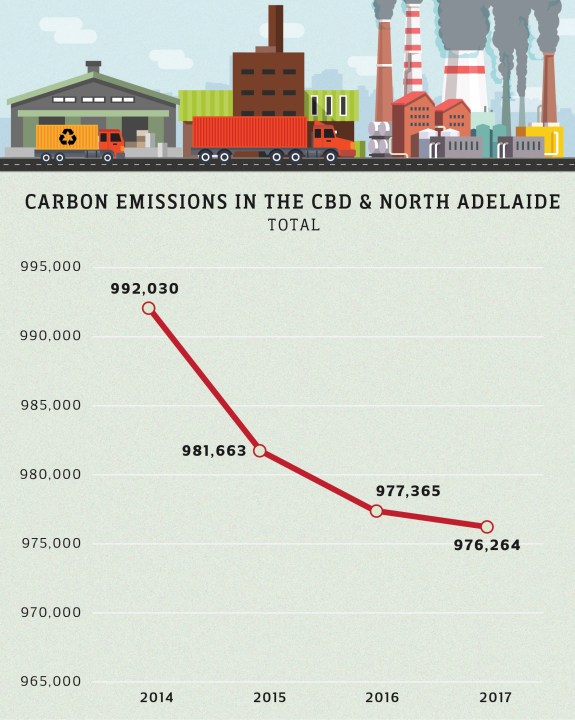 The CBD and North Adelaide’s carbon emissions have been falling, but the pace of reductions has slowed over time. Data: ACC. Image: Leah Zahorujko / InDaily.

Emissions from electricity and natural gas, used within the city, have driven the most significant reductions, while emissions from public and private transport have continued to climb.

Greenhouse gasses released from waste – including landfill, organic waste and wastewater – as well as emissions from the use of products, such as refrigeration, air-conditioning, fire extinguishers, aerosols and equipment, have remained relatively stable. 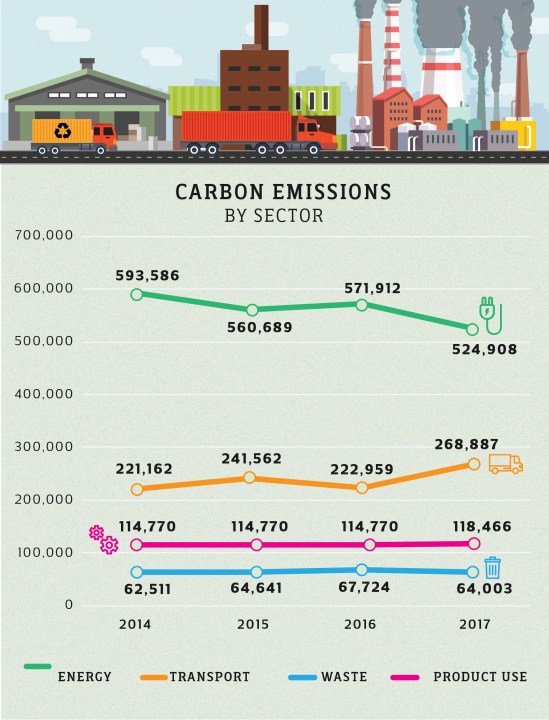 Despite the slowing pace of emissions reductions shown in the report, a council spokesperson told InDaily in a statement: “Emissions reduction in the City of Adelaide community will continue to accelerate as existing and approved energy efficiency and renewable energy projects in South Australia are reflected in the future carbon inventories.”

“(The) council’s Carbon Neutral Adelaide Strategy represents an environmental imperative to reduce carbon emissions, as well as an economic opportunity to reduce costs for our residents and businesses.”

The spokesperson said the council hoped to maintain partnerships with the State Government on “a broad range of policies, projects and co-investments, including in the area of sustainability”.

“We will be discussing these matters in the coming weeks with the new State Government.”

City of Adelaide Minister Stephan Knoll said he had “nothing further to add” to  Speirs’ comments about Carbon Neutral Adelaide, but told InDaily: “I look forward to sitting down … to understand the city council’s priorities and how they fit with the new State Government’s priorities.”

The council spokesperson added that carbon emissions from the CBD and North Adelaide had declined by 15 per cent in the 10 years from 2007 and 2017.

“This has been achieved during a period of strong city growth,” the spokesperson said.

In total, 140 businesses have signed up to become Carbon Neutral Adelaide Partners, including Microsoft, the Property Council of Australia, the universities of Adelaide and South Australia and Knight Frank.

“This partnership program recognises that a whole of community approach is required to lower our City’s carbon emissions,” the spokesperson said.

Meanwhile, the council is also committed to making its own corporation and activities carbon neutral by 2020.

Figures presented at last night’s meeting show that the council’s corporate carbon emissions dropped sharply, by 10 per cent, between the 2016 and 2017 financial years.

Haese did not respond to InDaily‘s request for comment.