The report finds the Central Adelaide Local Health Network, which runs the hospital, was yet to meet seven “core” standards and undertake 17 “developmental” actions.

Then-Treasury spokesperson Rob Lucas said at the time that failing to release the report would be considered “an attempt by senior members of the government and/or the public service to protect the political fortunes of the Labor Party at the expense of the public’s right to know, and the best interests of community safety for all South Australians”.

All of the problems identified by the Australian Council on Healthcare Standards’ surveyors are of “low” to “moderate” risk, and none need to be fixed immediately.

SA Health must fix them by early June to avoid losing accreditation for the state’s flagship hospital.

The risks described in the report include the need for a comprehensive assessment of medication management systems and training in patient and carer engagement. 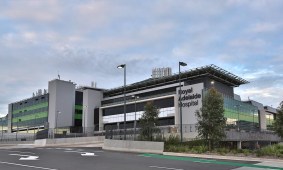 The Weatherill Government had argued the report was “interim” in nature, and was not released as a matter of normal practice until the final report, which it said was coming next month.

Central Adelaide Local Health Network CEO Jenny Richter had told staff in a newsletter that day that: “A copy of the final accreditation report will be published on the intranet when it becomes available in April.”

But newly minted Health Minister Stephen Wade said this afternoon that “the people of South Australia had the right to know that their new $2.3 billion hospital had not met accreditation standards before casting their ballots”.

“Contrary to the assertions of the former Labor Government, there is no indication the report is an interim report,” he said.