Labor have already copped their whack over a misleading flyer, posting a retraction on the party’s social media sites today over claims of a “secret Liberal plan to cut $557 million of the GST share from South Australia” in line with a demand from electoral commissioner Mick Sherry.

The commissioner has also hit SA Best leader Nick Xenophon with a ‘cease and desist’ notice over his distinctive Fiat Bambino, which is emblazoned with his branding and the slogan: “Don’t get taken for a ride.”

But Liberal leader Steven Marshall was refusing to retract his claim – repeated in a robo-call campaign – that the Liberal policy, including a new interconnector to New South Wales and subsidised household batteries, would see power prices fall by an average of $302 a year by 2021/22. The Liberals at the time cited independent modelling provided by ACIL Allen Consulting, but the research actually showed the Liberal policy measures would only cut around $60 to $70 a year and that the bulk of the savings would be delivered even if the measures were not in place.

Marshall conceded the point days after the initial announcement, but – following an official complaint by ALP state secretary Reggie Martin – has now been hit with a determination by Sherry, who has directed the party to issue a public retraction and correction via media release, social media “and in conjunction with the plan wherever it is published”.

The commissioner determined that the material “is contrary to…the electoral act” and “contains a statement purporting to be a statement of fact that is inaccurate and misleading to a material extent”.

“It appears that the plan includes measures that are already in place and that a significant part of the savings referred to would result from those measures,” he wrote in a letter.

“It also appears that a significant part of the saving as referred to (around $230) will eventuate whether the plan is implemented or not… I note that this appears to have been conceded by Mr Marshall in a press conference on 10 October 2017 and in a later interview [on ABC Radio Adelaide].”

But Marshall wasn’t backing down today at a media conference in the seat of Mawson – a seat the Liberals are hoping to gain in a tight three-way contest.

“Labor’s done an appalling job with skyrocketing energy prices, and the Liberal Party’s got a positive policy.

“We’re in correspondence with the electoral commission regarding the letter they sent to us today, but we believe we have got the best plan for energy at this election and we’ll be promoting it right through to 6 o’clock on Saturday.”

Marshall said the electoral commissioner was “not disputing the $302 figure” and refused to concede the Liberal advertising claims had been misleading.

“That’s the implication that [the electoral commission] is stating – we don’t accept that,” he said.

“Our policy setting would reduce the wholesale price of electricity by a further 24 per cent… the Liberal Party is the only party with a positive plan.

“We’re still in correspondence with the electoral commissioner but we’re out there promoting our policy [and] we’re not moving away from our position.”

Asked whether he had lied to people, Marshall doubled down on the original claim, saying: “The Liberal Party has got an excellent policy – prices will come down in SA, they will come down by $302.”

“The Liberal Party has been very upfront about this from day one,” he added.

The Liberals last night went on a robo-call spree asserting that Jay Weatherill had proposed “increasing the GST from 10 to 15 per cent” – referring to the Premier’s role in a now-abandoned national debate over tax reform.

“We’re making the point that Jay Weatherill is addicted to increasing taxes – he’s been lobbying other Liberal premiers around Australia saying the GST needs to go up,” Marshall insisted. 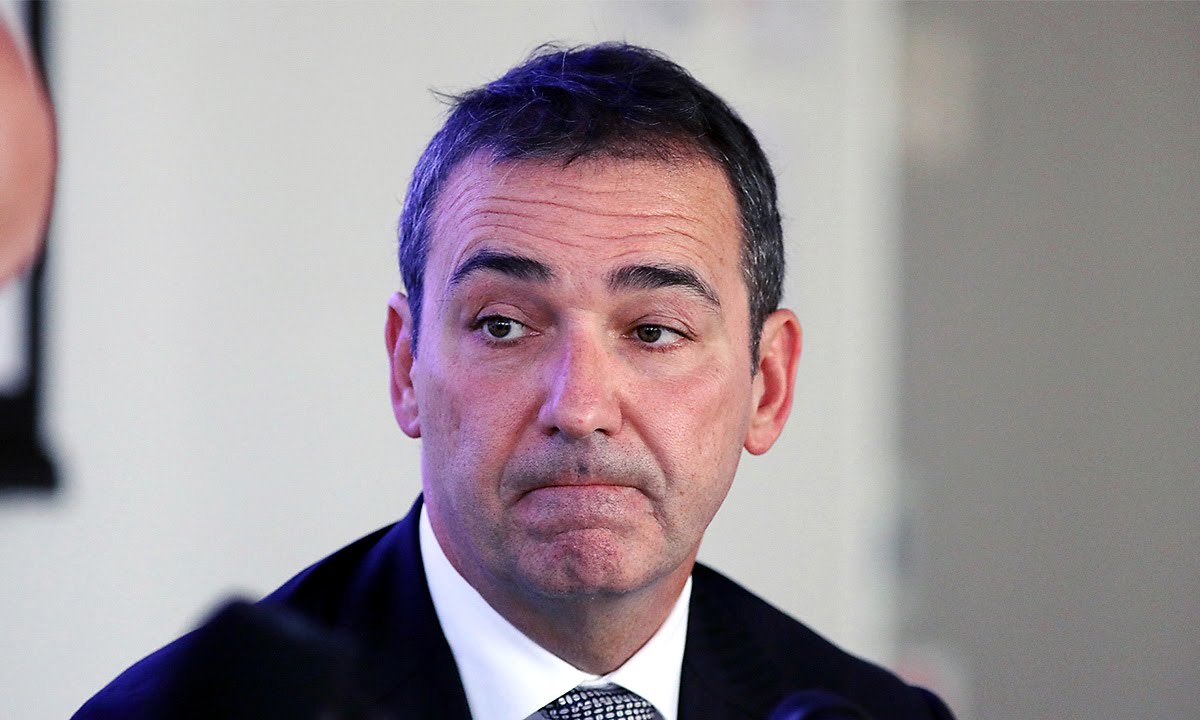 The Liberal leader conceded the election remained “on a knife edge”.

“It’s going to come down to the absolute wire,” he said.

But having previously ruled out dealing with Nick Xenophon if he held the balance of power, he would not rule out negotiating with other SA Best MPs if the Liberals could not form a majority in their own right.

“We’re campaigning for a win, that’s what we’re doing,” he said.

Xenophon’s own future is very much up in the air, with both he and Weatherill holding media conferences in his prospective seat of Hartley today, after an Advertiser Galaxy poll yesterday put the SA Best leader narrowly behind Liberal Vincent Tarzia on a two-candidate basis.

But Xenophon was today picking a fight with the electoral commissioner, who wrote to him about his choice of transport.

“It has been brought to my attention that you have a car with signage that breaches section 115 of the electoral act,” the commissioner wrote, noting that the images exceeded the one square metre threshold allowed under the act.

“I am satisfied that the signage on the car constitutes an electoral advertisement for the purposes of the Act… I write to advise you to remove the car from public view immediately.”

Xenophon faces a maximum penalty of $5000 for the breach.

But he too was refusing to budge, saying he would take the matter to the High Court if necessary.

“We’ve seen the JayBus, huge billboards and multi million dollar election campaigns against SA Best and its candidates – but we can’t have a Fiat Bambino!” he said.

“We’ll not be standing the Fiat Bambino down… this Fiat Bambino will be around right until he close of polling.”

Xenophon said he’d received legal advice that “this section of the act could well breach the federal constitution [around] the implied right of political communication”.

“The Fiat Bambino is a very effective means of political communication… it should be allowed to be on the streets of Hartley to get the message across.

“We think we’re within the law but if we are prosecuted we’ll fight this all the way.”

Despite refusing to budge on his own adverse finding, the SA Best leader said Marshall “needs to correct [his own] claims and he needs to do it ASAP”.

“There’s a world of difference between a Fiat Bambino asking people to vote for SA Best and Steve Marshall making claims the electoral commissioner’s found to be false,” he said.

Xenophon has been in both major parties’ sights, with a Liberal leaflet distributed this week depicting his face as an ‘Instant Scratchy’ card, with Jay Weatherill’s likeness underneath.

The Liberal handouts: before and after. 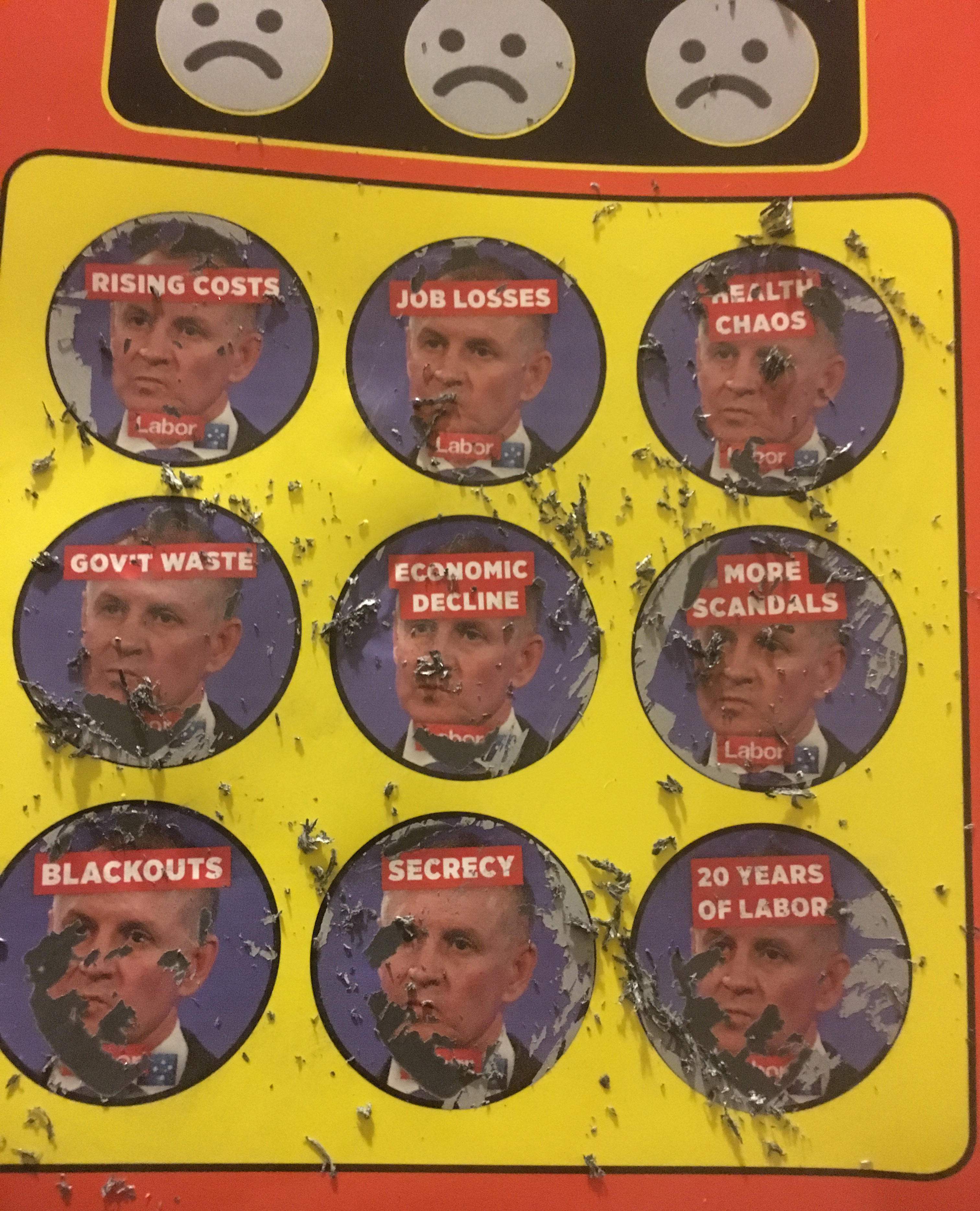 “The Libs don’t get it, how many people have been hurt by gambling.” Xenophon said.

“If they want to use a scratchy as an election tool I think it reflects badly on them.”

Labor, in contrast, was quick to retract its own election advertising that fell foul of the commissioner, after a flyer authorised by senator Alex Gallacher implied that “’the Libs’ involved in the ‘secret plan’ included the South Australian Liberals [and] in particular, Steven Marshall”.

The commissioner found that the claims were “inaccurate and misleading to a material extent”.

Weatherill today hit out at the Liberals’ latest robo-call, calling their GST claims a “desperate smear”.

“It’s impossible [to raise the GST] – we don’t have the constitutional power to do it,” he said.

“There’s no truth in it… it just demonstrates how they must be feeling at the moment.”

The Premier too insisted the election was “still up for grabs”.

He did not comment on the specific Hartley poll but said voters were “peeling off Nick and voting Labor… and this is what we’re seeing across the whole of the SA community”.

An Electoral Commission SA spokeswoman would not comment on any individual complaint, but said that in some cases there is an exchange of information between the commission and the party accused of the breach.

Parties can ask for determinations to be reconsidered.

“They are a reviewable decision,” she said.