SA Best was graded 21.5 stars out of a total 30, followed closely by Labor (20 stars) and the Liberals (18 stars) – but SACOSS also noted that Labor and the Liberals offered much more comprehensive responses to its platform. 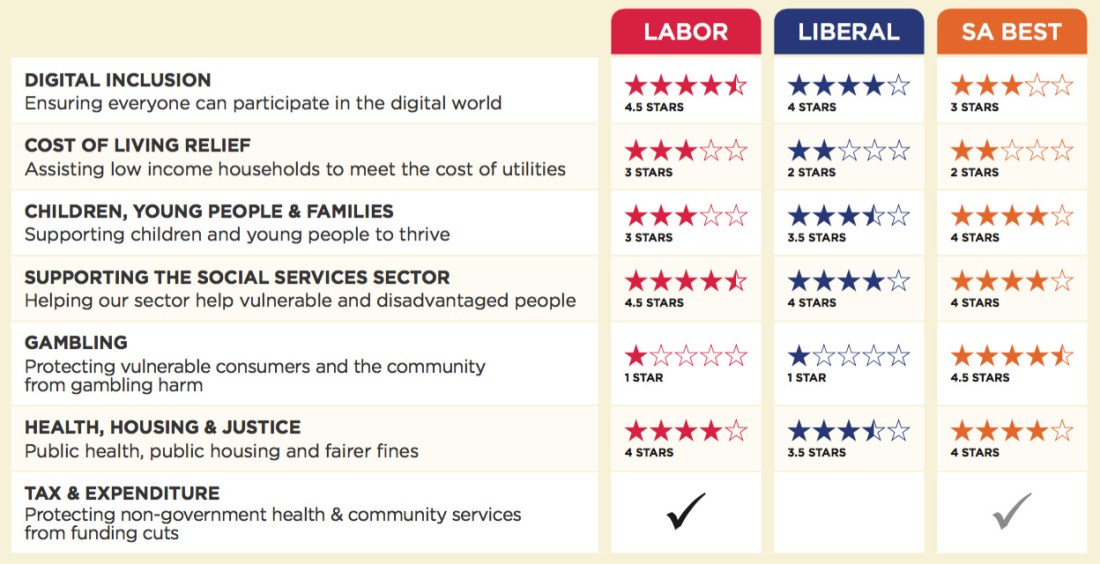 “We do know that it’s easier for some parties to provide in principle agreement to our policies,” he said.

“Our intention is not to add up the stars, but to reflect policy commitments and to invite community members to understand how different parties have responded.”

SACOSS also graded the minor parties a score out of 10 based on the support they had indicated for policies that would require the passage of legislation in the upper house.

The Greens ranked on top with a score of 9.5, followed by the Dignity Party (7.5) and the Australian Conservatives and Advance SA (both 5/10).

“The starkest difference in the positions of the parties is evident in the area of gambling policy,” Womersley said.

“While Dignity, the Greens and SA Best each supported the specific gambling harm minimisation measures SACOSS proposed, the Greens’ policy of phasing out pokies from pubs and clubs was the most welcome.

“Both Liberal and Labor are disappointingly stuck with the status quo – despite the known problems of gambling harm.”

“Both Labor and Liberal have put together different packages which we believe are good starting points to address digital inclusion.”

However, Womersley said the parties’ responses to SACOSS’ cost of living policies were “generally disappointing.”

“Labor has however initiated a range of different measures [such as] negotiating a better deal for concession recipients and [installing] solar and battery storage in conjunction with the development of a virtual power plant prioritising housing trust tenants,” he said.

“SACOSS also welcomes SA Best’s comments on Cost of Living, and its commitment to achieving lower prices by withdrawing support if it holds the balance of power.”

Womersley was also “disappointed” by responses to public housing policy.

“We were disappointed no party was prepared to categorically say that there would be more public housing at the end of their term of government than at the beginning,” he said.

“Access to affordable, safe and securing housing remains a foundation stone in being able to build a good life.

“The fact that public housing assets in SA have been eroded is of deep concern to SACOSS.”

The Liberals received a good word for their policy position on children, young people and families, with Womersley giving particular mention to the party’s promise to “fix the flaws” in the Child Protection Act.

“We are glad that we should see a bill passed through parliament to mandate investments in harm prevention and early invention activities that drive enhanced wellbeing for children, young people and their families,” Womersley said.

Womersley was less certain about the Liberals’ commitment to ensuring there would be no cuts to funding of social services.

“The Liberals have announced significant tax cuts in a range of areas which will impact their available revenue should they form government and we note they are yet to announce how they intend to fund these election promises,” he said.

“SA Best has also made commitments to both significant tax cuts and new investments.

“It is not clear how these would necessarily be funded however they do commit to making any efficiency savings created available for discretionary re-allocation to within appropriate services.”

Womersley said SACOSS welcomed Labor’s promise that it would not make any cuts that hadn’t already been announced.

“We assume this will mean no sector cuts despite its own departmental efficiency dividend announced in the mid-year budget review.”

A more detailed version of the report card will be available this afternoon on the SACOSS website.