But every Chief Psychiatrist leading South Australia’s mental health bureaucracy since 2010 has presented an annual report to every Minister for Mental Health and to Parliament – and all of those reports flag disproportionately high levels of restraint and seclusion of older mental health patients (except for the latest, which has no data on the subject).

A graph in the 2010-11 annual report of then-Chief Psychiatrist Dr Margaret Honeyman shows older mental health patients – those aged 75 to 84 – were secluded or restrained more than any other group. 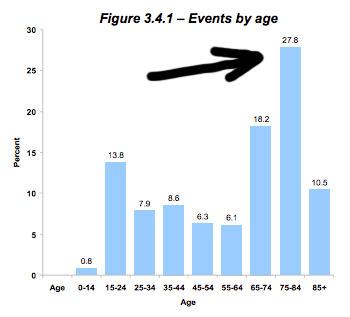 A graph from the 2010-11 annual report of then-Chief Psychiatrist Dr Margaret Honeyman shows the 75 to 84-year-old age group had the highest rate of restraint and seclusion. 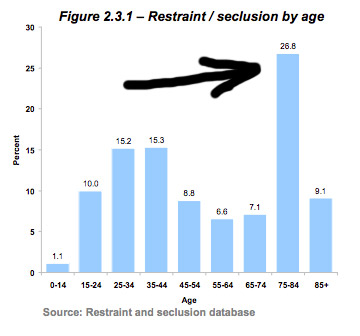 A graph from the 2011-12 annual report shows the 75 to 84-year-old age group had the highest rate of restraint and seclusion.

A graph from Tyllis’s 2012-13 annual report shows the same thing. 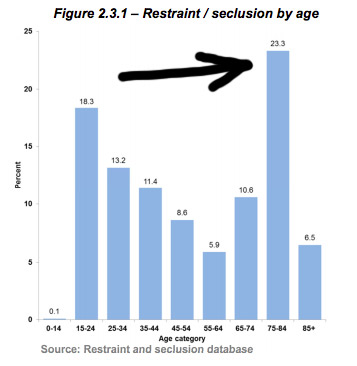 A graph from the 2012-13 annual report shows the 75 to 84-year-old age group had the highest rate of restraint and seclusion.

That report showed seclusion and restraint of older mental health patients made up 42 per cent (694) of the total number of restraint and seclusion events (1649).

A table from the 2013-14 report shows older mental health patients were restrained or secluded at a disproportionately high rate. 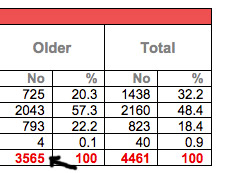 A table from the 2014-15 report shows older mental health patients were restrained or secluded at a disproportionately high rate.

Groves’ 2016-17 annual report contains no data on restraint and seclusion – but notes that one of the Chief Psychiatrist’s functions is to monitor that data.

Malinauskas told a press conference a day after Lander’s report was released there had been about 1600 incidents of restraint and seclusion at Oakden in the final six months of 2016.

He added that in the final six months of 2017, that number was down dramatically, to “somewhere in the order of four” – suggesting the extraordinarily high rate of restraint and seclusion at Oakden was a matter of practise rather than necessity.

InDaily asked Malinauskas for comment, but he did not get back to us before deadline.

Inappropriate and frequent restraint and seclusion – which was often abusive, illegal and sometimes used for punishment or staff convenience – was one of the key indictments of the Oakden facility within Aaron Groves’ damning Oakden Review, which prompted the Government to close the facility last year.

Independent Commissioner Against Corruption Bruce Lander’s investigation into Oakden found five individuals and the Northern Adelaide Local Health Network had engaged in maladministration of the facility.

While Lander finds that Groves’ inaction in response to a complaint by Barb Spriggs about the treatment of her husband at Oakden was “indicative of a failure to exercise his statutory functions”, he also finds South Australia’s most recent Chief Psychiatrist could not be criticised for failing to identify the problem of restraint and seclusion in older persons’ mental health.

In early 2015, Groves wrote to the CEO of the Northern Adelaide Local Health Network Jackie Hanson (also cleared of maladministration by Lander) about incidents of restraint in older persons’ mental health services.

Lander’s inquiry heard from Groves that the incidence of restraint and seclusion at Oakden in 2015 was greater than the “total rate of mechanical restraint in all acute mental health services in the rest of Australia combined”.

In June 2016, according to Lander’s report, Groves emailed Hanson and the NALHN Chief Operating Officer Scott McMullen, describing the rates of restraint in the older persons program in NALHN as “extraordinary”.

According to the ICAC report, Groves also:

Ultimately, Lander finds that Groves “took adequate steps to address that part of his statutory responsibilities” and lauds his Oakden Review for bringing abuse and maltreatment of patients at Oakden, eventually, to light.

Groves is now the Chief Psychiatrist of Tasmania.

SA Health has been trying to recruit a new Chief Psychiatrist since Groves left mid-last year.

In his report, Lander is unable to find Groves’ predecessor Peter Tyllis “engaged in substantial mismanagement in or in relation to the performance of official functions because he had no knowledge that the facility and the standard of care at the facility were sub-optimal”.

The commissioner declines to make any criticism of Honeyman “because she was not a witness and was not available to be interviewed on this issue”.

He finds that successive Ministers for Mental Health could not be guilty of maladministration.

They were deemed responsible, but not culpable, for the conditions at the aged care mental health facility.

“The evidence I have received makes it quite clear that, to a large extent, what was occurring at the Oakden Facility was unknown to ministers and chief executives,” Lander writes.

Dr Russell Draper – one of the individuals against whom Lander does make a maladministration finding – told Lander’s inquiry that he did not believe levels of restraint at Oakden were inappropriate.

Lander’s report reads: “Dr Draper said that in 2015 there was a restraint minimisation group that tried to gradually implement better practices.”

“He conceded there was an occasion when he and the staff did not realise that moving a consumer into a separate room without nursing staff supervision constituted seclusion.

“He agreed that there are better practice models that do not rely on restraints but they were unable to implement those practices without further funding.”

SA Health’s policy guideline on restraint and seclusion says all efforts should be made to minimise and eliminate their use.

But it says restraint can be legitimately used to protect safety of patients, staff members and others, or to ensure immediately required treatment or medication is administered, or to prevent a person leaving a facility if they are detained under an Inpatient Treatment Order.

A spokesperson for SA Health told InDaily this afternoon that the reporting of seclusion and restraint “has been developed in recent years under the National Mental Health framework”.

“The Chief Psychiatrist monitors the rates of seclusion and restraint in mental health sites and hospitals and works alongside hospital management to minimise those rates.

“Previous Chief Psychiatrists have reviewed policy in this area and directed improvement in clinical practice.”