InDaily can reveal the Department of Education and Child Development (DECD) redescribed the positions of its entire languages team over the Christmas break, following the release of a new strategy designed to curb the drop in language enrolments.

In 2006, 10.9 per cent of Year 12 students undertook language studies as part of their South Australian Certificate of Education (SACE).

Latest figures from the SACE Board show that number dropped to just 4.9 per cent in 2016.

The strategy outlined a target to increase enrolments in languages by 2021, and detailed the need for two language-focussed system reviews across a set of sample schools.

“What we needed to do was to look at the work of our current languages team and when the Languages Strategy came through we decided to re-describe all the jobs,” DECD executive director of learning improvement Susan Cameron told InDaily.

“This was a full merit selection process and we increased the level of the manager, so the manager is now at a higher level.”

InDaily understands a few of the positions were re-won by the original staff, with others from the old team choosing to take up positions elsewhere in the department. The former head of the languages team chose to leave the department voluntarily. 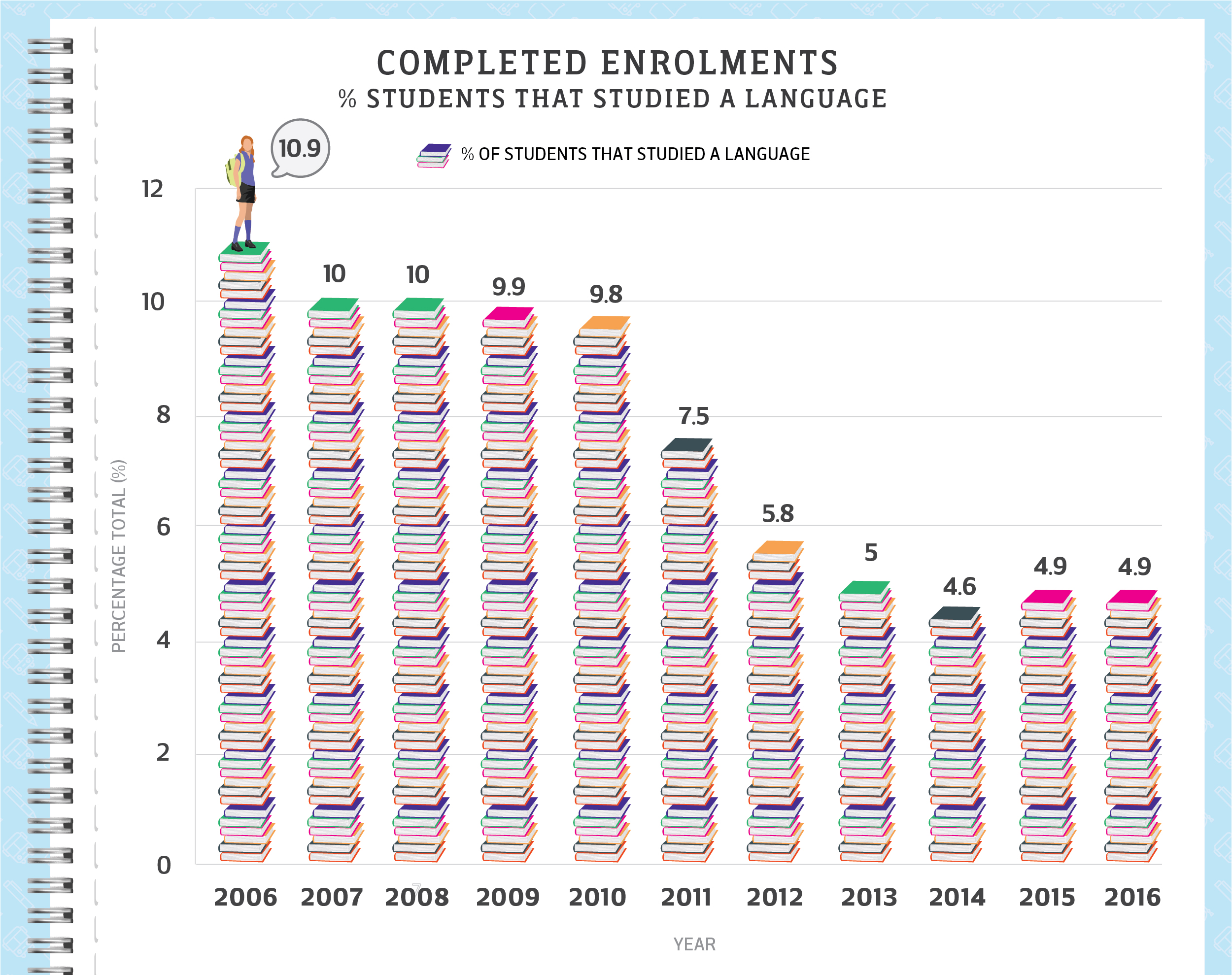 Data from the SACE Board. Graphic: Leah Zahorujko /InDaily.

Education Minister Susan Close said she found the decline in language enrolments in the state “concerning.”

“It’s very important to me personally – myself being a secondary language learner – that we address this,” she said.

“It’s essential that we improve the languages offering and provide the support to teachers to do that, and that’s why we announced the Languages Strategy in October.”

As part of these changes, minimum study requirements for Stage 2 were cut from five subjects to four, with the fifth choice subject replaced by the compulsory Research Project.

The Research Project allows students to undertake research on a topic of their choosing, and was designed to develop students’ independence, research and communication skills.

SACE Board chief executive Professor Martin Westwell said the Research Project was not solely to blame for the drop in language enrolments, adding enrolments have been on the decline in the state for decades.

“My interpretation of [the] data is that the Research Project and the new SACE didn’t have that impact – it just magnified the underlying trend a little bit,” he said.

“I think the idea that students have got much less choice is a little bit of a furphy because there is actually quite a lot of flexibility in the requirements from the SACE.”

Westwell said the pressure to obtain a high ATAR was pushing students away from wanting to continue their language studies to Year 12.

“When we talk to the Language Teachers Association for example, one of the things that they’re flagging is that there’s actually plenty of students that are [studying languages] at Stage 1, but when it gets to Stage 2 they’re dropping it,” he said.

“One of the contributing factors for that is the ATAR because students want to do their learning, but they’re recognising that if they want to raise their ATAR then languages might not be in the portfolio that would do that for them.”

This is despite an incentive from the South Australian universities, who offer students who obtain a C- grade or higher in a Year 12 language course two bonus points towards their ATAR.

Westwell said the SACE Board would not consider making it easier for students to obtain higher marks in language subjects.

“At the SACE Board our primary job is to hold the standard and nobody would thank us for lowering the standard,” he said.

Susan Close also defended the Research Project, describing the subject as an “essential feature” of the SACE.

“The Research Project is a feature of many of the up-to-date high school certificates including the IB, which has a long-form essay for students to complete,” she said.

“It made [the SACE] a very robust qualification.”

However, Close’s Liberal opponent John Gardner says a Marshall-led government will review the Stage 2 SACE requirements, including subject numbers and the Research Project, if it wins the March election.

“Most language teachers that I’ve spoken to have told me the Research Project and the drop from five subjects to four has contributed to the decline in enrolments,” he said.

“We want that review to make sure students are being given the best opportunities to continue studying languages and to ensure there are no limitations on them.”

The Modern Language Teachers’ Association state branch president, Andrew Scrimgeour, said the reasons behind declining enrolments were different for each language, but there was an overarching problem occurring in middle school (Years 8-10).

“We would have more kids doing Year 11 and 12 if we could get middle school right,” he said.

“Even though the drop off rate between Year 10 and 11 is quite significant in most cases it’s not the only problem. The problem has already occurred earlier.”

Scrimgeour said more needs to be done to inspire students from a younger age to continue language studies through to senior secondary years.

“From my perspective the ways that we’ve constructed the curriculum are serving the elite who are likely to go on to Year 12 and therefore not serving the majority who are yet to be convinced that that’s a good idea,” he said.

“If you don’t convince them in the early years that this is an enjoyable and positive and useful experience then of course they’re not going to continue.

“We have to cut the nexus between a failing system in the senior secondary years and the learning in middle school.”

Despite the State Government’s China Engagement Strategy and a push to forge greater ties with France following the awarding of the federal-funded submarine contract to a French company, SACE enrolments in Chinese and French both follow the downwards trend. 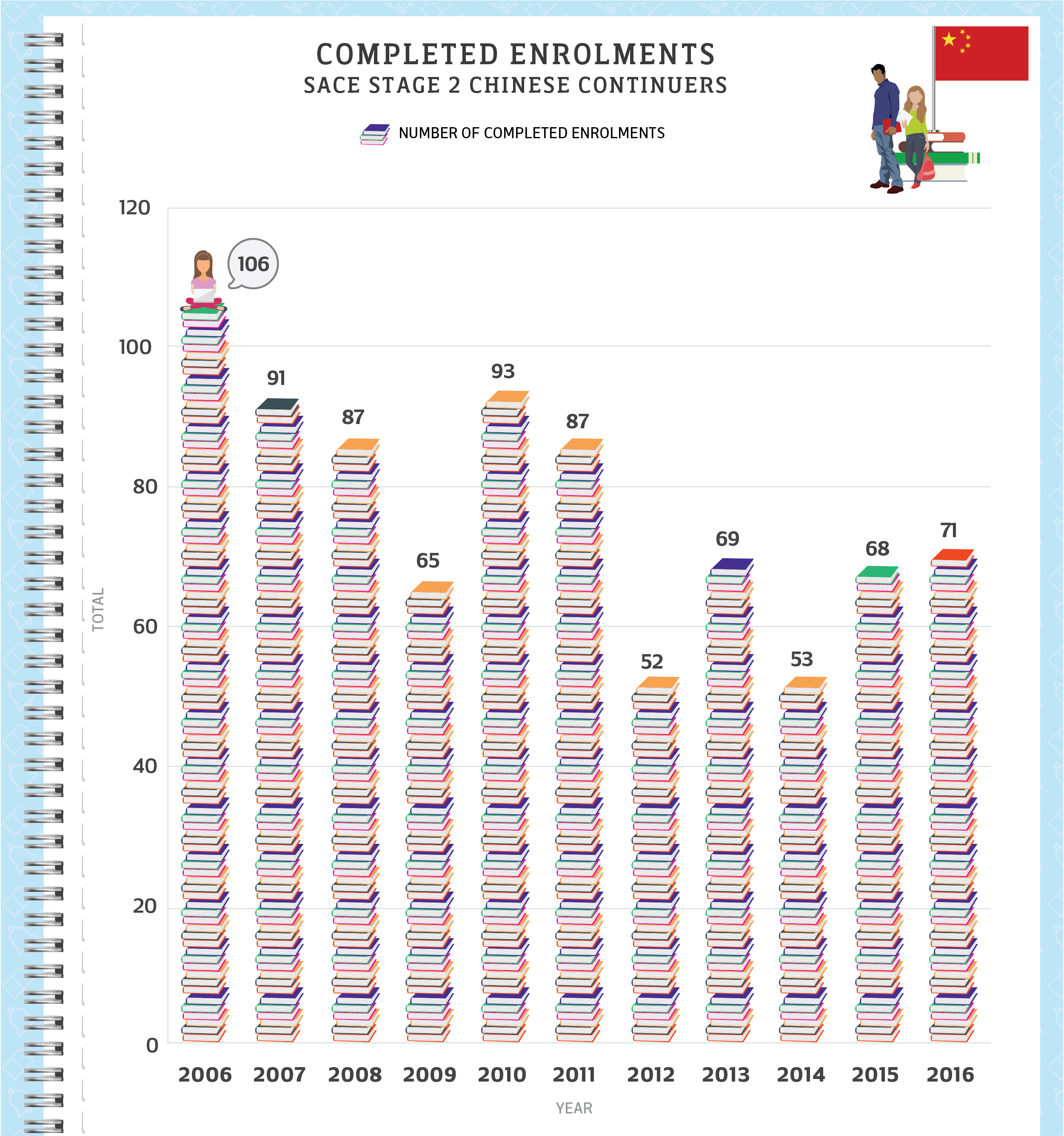 Data from the SACE Board. Graphic: Leah Zahorujko /InDaily. 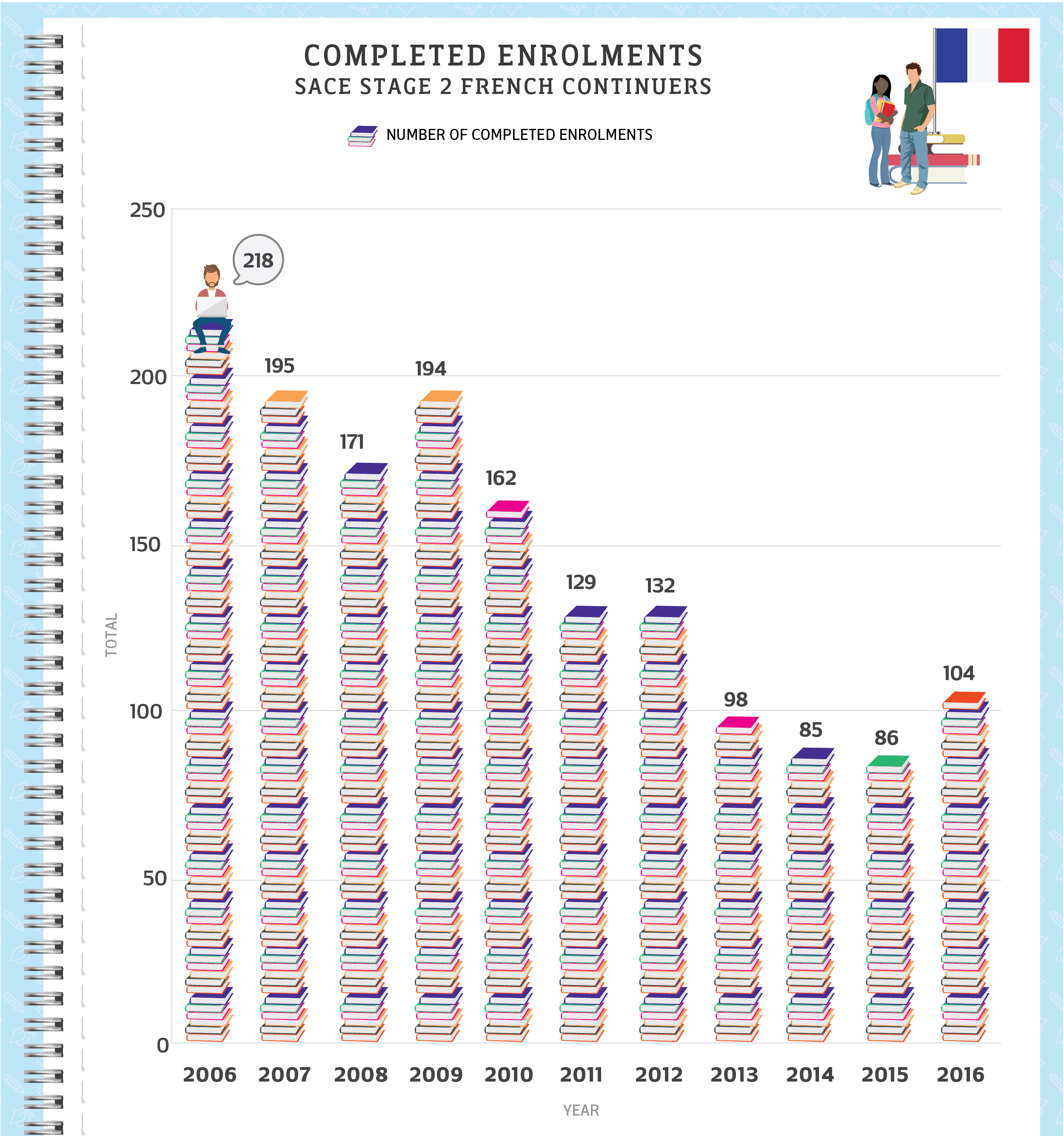 “Two of our languages that the government has been putting the most investment into have some of the lowest levels of participation in Year 12,” he said.

“The political narrative is really barking up the wrong tree and the kid’s aren’t listening.”

Scrimgeour said there has been an increase in the number of schools resorting to composite Year 11 and 12 language classes to cope with the falling numbers.

“In many schools the teachers have been required to teach Year 11 and 12 together and in diverse languages like Chinese they’ve had to teach background speakers beside second language learners in the same classroom,” he said.

“In some schools they’ve had to teach IB and SACE curriculums in the one classroom.”

“That has clearly impacted upon kids’ motivation to continue with their languages and once they see that they do Year 11 and 12 twice they see that no, this isn’t quality teaching.”

“The employment environment is not such that you can differentiate to that extent,” Scrimgeour said.

“In secondary the number of actual schools that teach these languages is diminishing and you’ve got underemployed teachers.

Statements from the University of Adelaide and Flinders University suggest language enrolments at a tertiary level have remained stable in recent years.

UniSA said their enrolment numbers were healthy but significantly lower than five years ago.