The SA Branch of the Australian Nursing and Midwifery Federation said Xenophon’s party had failed to respond to “repeated requests” for health policy detail ahead of the March state election.

As a result, SA Best has been ranked as “poor” on every measure considered by the federation.

However, Xenophon says he will be releasing health policies in the coming weeks and he hopes the federation will change its assessment.

Federation secretary and CEO Elizabeth Dabars said she was disappointed by Xenophon’s non-response, which was “disrespectful” to nurses and midwives.

“We’re not asking about the weather; we’re asking for genuine details on Mr Xenophon’s plans for the future of health in our state,” Dabars said.

“How can you possibly consider yourself a serious contender as Premier if you can’t release details on how you plan to allocate resources that represent 30 per cent of the entire state budget?”

Xenophon told InDaily that he meant no disrespect, stressing that his “small start-up” political party would be releasing health policies soon.

“I’m disappointed,” he said. “I have enormous regard and respect for the work of nurses and midwives. We talk to nurses about the pressure they’re under – the cuts, the mismanagement (of the health system)…

“I’m sorry that Elizabeth Dabars has taken such as a political view of it, which doesn’t reflect our concerns for nurses.

“I hope by the end of the campaign they won’t have the same view.”

Dabars said the detailed scorecard would be updated throughout the campaign to take into account health announcements by the major parties.

So far, though, the federation’s assessment gives the Greens an “excellent” rating on every measure, with Labor and the Liberals rating similarly on many measures. 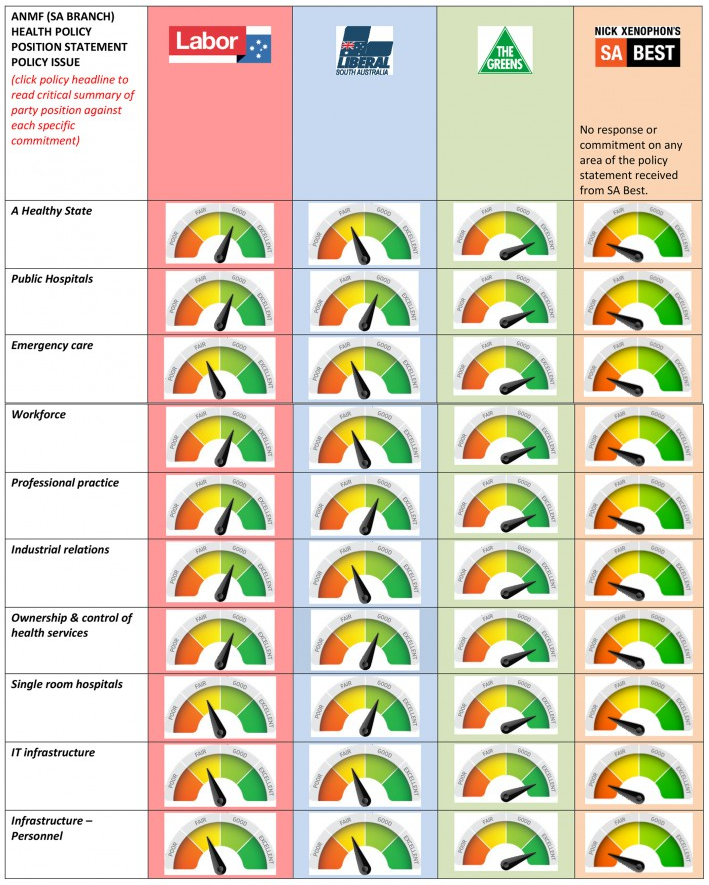 A screenshot of the nurses union’s election scorecard.

The scorecard website allows users to drill down in detail to assess the parties’ policies against the ANMF’s positions.