The new company is to be run by 1835 Capital managing director Jason Di Iulio and Cibo Espresso co-founder Roberto Cardone.

InDaily has seen a confidential letter sent from Di Iulio to Adelaide City Council CEO Mark Goldstone on Monday, distributed to councillors on Tuesday, saying that Duckworth and Skipper were not to be directors of the company – and threatening severe consequences if elected members refused to grant the five-year licence.

It says Duckworth will be employed by the new company – not leading it – as creative director for the event.

In the strongly-worded letter, Di Iulio warns that his company will withdraw more than $1 million in funding from the new company and cancel the Royal Croquet Club event “in 2018, or likely any time in the future” if the council decides against granting the five-year licence.

Di Iulio warns that the Adelaide Fringe Festival would suffer a 15 per cent reduction in ticket sales if the 2018 event were cancelled as a result.

The letter reads: “1835 Capital has committed to contributing in excess of $1m to 1835 RCC (the new company), subject to the issuance of the minimum five years licence”.

If the council does not grant the licence “the flow on effect in that circumstance will directly cause a 15 per cent reduction in the sale of all Fringe tickets sold, and seriously jeopardise the Adelaide’ Fringe’s title as the largest Arts Festival in Australia and the second biggest Fringe in the world after the Edinburgh Festival”.

Further, declining to grant the licence “would be a clear message to millennial South Australians that ACC (Adelaide City Council) does not support nor value their contribution to the South Australian economy and community,” the letter says.

“Mark, I encourage you and the ACC to focus on the future and leave the past in the past.”

The Royal Croquet Club is due to begin setting up at Pinky Flat, on the banks of the River Torrens, in less than a week with about 20 acts listed to perform.

1835 Royal Croquet Club Pty Ltd is yet to be listed with the Australian Securities and Investment Commission.

On Monday, InDaily reported that investors had told the Goldstone that they would withdraw financial support for the 2018 Royal Croquet Club event if the licence were not granted.

Agenda papers for last night’s meeting also said that the council’s administration “understands” that investors would withdraw a $500,000 lifeline for the Royal Croquet Club, should the licence not be granted.

Duckworth told InDaily on Monday “the details of the papers” were “incorrect”, but would not say what part of the document he disputed.

A council spokesperson declined to comment on the accuracy of the papers yesterday but told us this morning that “it was our understanding that if the licence wasn’t granted, that it was unlikely that the deed contribution would be paid”.

Lord Mayor Martin Haese told InDaily this morning that he believed the council had made the right decision in granting the long-term licence.

He said it would prevent financial hardship for the Fringe, ensure the viability of the popular Royal Croquet Club event and protect ratepayers from any financial risk.

“The event will go on … I think councillors made the right decision last night,” said Haese.

“The criteria, first and foremost, (was that) the City of Adelaide ratepayers were not taking a financial risk on the event.

“We just wanted to make sure there were appropriate mechanisms (for) financial security in place (and) really strict provisions around noise control.”

The licence was granted on condition that parklands licence fees and remediation costs are paid in advance for each of the first three years.

Haese said the Royal Croquet Club was the only event to be held in the parklands that would operate under such financial restraints.

However, he argued the conditions were reasonable, given that the council had had no past dealings with the new company and because five-year licences are generally only given to events with a proven track record of complying with council regulations.

Councillors Megan Hender and Phil Martin told last night’s meeting they were “uncomfortable” with the position they had been put in and that they felt under “pressure” to grant the licence.

But both said they were willing to vote for it because of the financial securities that had been put in place. 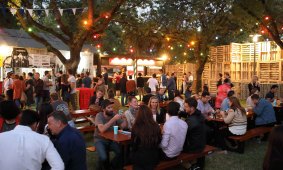 Area councillor Anne Moran voted against the five-year lease, telling the meeting the Royal Croquet Club had a history of breaching council regulations and that she had “no faith” in financial assurances given.

On Wednesday evening Duckworth told InDaily that he remained creative director of the Royal Croquet Club and “all I have been working on is ensuring we have the opportunity to continue to build on the success of the event with the new team”.

Thursday morning, he added that: “Tom (Skipper) and I are honouring our obligations as part of the voluntary administration process and have been working as hard as possible to satisfy the terms of the (Deed of Company Arrangement) since they were agreed to”.

“We are doing all that we can and we thoroughly appreciate the support we have been given during this time, which has given us the necessary motivation to continue to work as hard as ever on what is a very important part of the Adelaide Fringe.”