The battery – actually a series of Tesla batteries connected together – is powered up by renewable energy from the nearby Hornsdale windfarm, run by French company Neoen.

Weatherill, who formally launched the battery today with representatives from Neoen and Tesla, didn’t let the grey day at Jamestown dampen his enthusiasm.

“We’re getting BBC, New York Times, we’re getting Washington Post, everybody is covering this event,” he told FIVEaa. “South Australia is on the world map because we’re leading in a technology of the future. I think we should be proud of it and people should stop bagging this beautiful state.”

While the battery has the capacity to power 30,000 homes for up to an hour in the event of a severe blackout, it is more likely to be called into action to even out electricity supplies at less critical times.

Its construction came after a now-famous Twitter exchange between Elon Musk and Australian tech billionaire Mike Cannon-Brookes, who challenged the Tesla boss to help with South Australia’s energy problems.

Musk responded that if he couldn’t build a 100MW battery in 100 days from signing the contract, he would provide it for free.

Tesla easily beat the deadline, finishing the battery 63 days after the signing of the grid connection agreement, although it did get a significant head start on construction.

Musk wasn’t present for today’s official ceremony, but a Tesla spokesperson said “the completion of the world’s largest lithium-ion battery in record time shows that a sustainable, effective energy solution is possible”.

“We are proud to be part of South Australia’s renewable energy future, and hope this project provides a model for future deployments around the world.

“The South Australian Government should be congratulated for ensuring their energy supply is not only sustainable, but will help solve power shortages, reduce variability, and manage summertime peak load.” 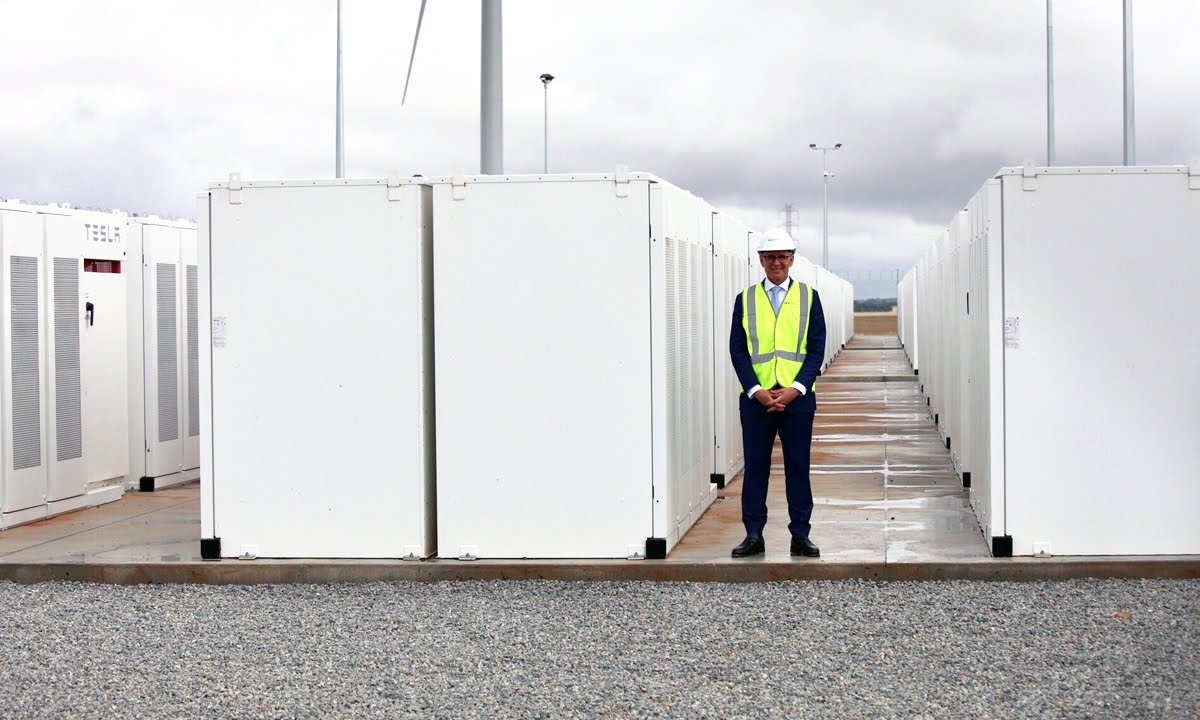 Weatherill declared the opening was “history in the making”.

“South Australia is now leading the world in dispatchable renewable energy, delivered to homes and businesses 24/7,” he said.

He couldn’t resist a crack at the Federal Government, with whom he has exchanged barbs over electricity all year, telling a national ABC audience that the Prime Minister, Malcolm Turnbull, had been proven wrong.

“They were laughing at us,” he told RN radio. “We had the Prime Minister making fun of South Australia and its blackouts, blaming our leadership in renewable energy which all ended up being demonstrated to be just a monstrous untruth.

“And now what we’re getting is international plaudits for doing what everybody really knows the world is going to have to do, that is to decarbonise their electricity systems, and doing so in a way where renewable energy can now provide firm dispatchable power.”