Namblard, a former Qantas board member who later served on the State Government’s Economic Development Board, was sacked as South Australia’s trade representative in Paris after InDaily revealed she had faced Italian court proceedings last month over an earlier deal to privatise and expand an airport in Tuscany.

But Namblard, along with six others involved with the deal, received a not-guilty verdict overnight (Australian time).

After a trial process that stretched over five years, she was absolved of alleged malpractices relating to the privatisation and expansion of Siena’s airport at Ampugnano.

The Public Prosecutor had requested a one-year sentence for Namblard for allegedly lying in a document about the relationship between the Siena Airport company, of which she was CEO at the time, and a Milanese consulting company, Polar, a facilitator.

After her sacking, SA’s Agent-General Bill Muirhead told InDaily that “extensive steps were undertaken to satisfy the State Government and the Office of the Agent General legal proceedings surrounding these allegations had been resolved”.

It is not clear what those steps were, but it appears precipitous of the Government to open the Paris office with Namblard as its head in September, if not to dismiss her a few weeks later, before the verdict.

However, a spokesman for Premier Jay Weatherill told InDaily in a statement: “Subsequent developments in Ms Namblard’s legal proceedings do not affect the decision to terminate Ms Namblard’s service agreement.”

It comes amid an internal review of government hiring procedures and a maladministration investigation by the Independent Commissioner Against Corruption into the recruitment processes surrounding the employment of another senior public servant in the Premier’s Department, after the separate sacking of the recently-appointed chief information officer Veronica Theriault and another public servant, Alan Corkhill. Theriault was fired after being charged with deception, dishonestly dealing with documents and abuse of public office.

Namblard made her second personal appearance in the Siena tribunal overnight.

As CEO of Galaxy Investment Fund, which specialised in transport infrastructure investments, she had convinced officials of the local Monte dei Paschi di Siena – Italy’s oldest and third largest bank – other businessmen and the town councils of Siena and Sovicille, where Ampugnano airport is situated, that the airport could find a niche in the low-cost market if privatised and expanded before the end of 2010.

However, some Sienese and residents of Sovicille near the airport were concerned at the prospect of too many RyanAir flights and big tourist hotels in an unspoilt valley.

They formed a Citizen Committee which managed to attract thousands to demonstrations in the streets of Siena in 2007 and 2009. They also alerted the Ministry for Transport and Infrastructures that the privatisation had gone ahead without the necessary Ministerial approval. They provided evidence of other irregularities to the Public Prosecutor’s Office, which initiated an investigation almost 10 years ago.

One of the defence lawyers told a committee member at the tribunal overnight that he was surprised at the committee’s tenacity. The reply was that it was not due to spite, but resistance to development being forced on the area without consultation.

Despite the not-guilty verdicts, some members of the Citizen Committee consider the result a win for “people power”, given the airport has not been privatised or expanded.

Furthermore, an eminent academic was considered a certain future Minister in the Mario Monti government but, because she was embroiled in the case, the Ministry was not created.

Members of the Committee also point out that those charged have had to hire expensive defence lawyers for a long period.

“We’re pleased that the trial even took place,” said one.

Another member said they wrote to Qantas asking how they could have on their board someone facing a penal charge in Italy, but received no response. 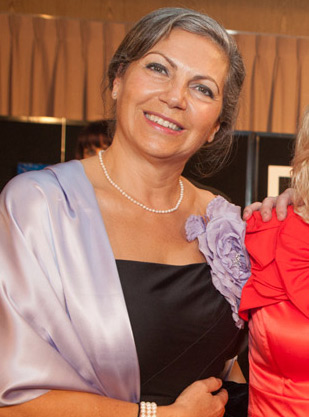 Corinne Namblard at a Helpmann Academy fundraising dinner in 2013.

Namblard quit Qantas in 2013 when the court proceedings were made public, but “strenuously denied any wrongdoing” at the time, saying her resignation was offered “to ensure that the continuing media focus on the current Italian proceedings did not distract Qantas from implementing its strategic imperatives”.

She later described the proceedings as “politically driven and played up by media in Australia”, noting “the official notice of statute of limitations definitely clears the situation”.

But the legal fracas didn’t stop the Weatherill Government appointing her to its Economic Development Board, which her personal website says she joined “at the invitation of the Premier of South Australia”. Her site says that in 2014 she was nominated one of SA’s Most Influential Women in Business and Finance.

Within 90 days of the Italian finding, the judges must publish the reasons for their verdict, with an appeal possible thereafter.

In the tribunal overnight a defence lawyer teased the prosecution about the allegedly exaggerated, unjustified appeals for compensation – 500 million euro in the case of the Siena Municipal Council and 100 million in that of Sovicelle.

One committee member suggested that, in an appeal, the defendants could reverse those claims and argue that they deserve compensation.