The latest ANZ/Property Council survey, released to InDaily, reveals property sector confidence at a record 144 points in the December quarter.

That’s 11 points up from the previous quarter, well above the historical average of 117 and the highest figure since South Australian property industry confidence records began in early 2012.

Property Council of Australia SA President Daniel Gannon attributes the uplift in confidence to a surging schedule of work expected in the next 12 months.

Forward work schedule expectations in the SA property industry are the highest in the country, according to the survey.

“There must be some green shoots on the horizon,” said Gannon.

“There’s a strong forward pipeline of residential activity in the city of Adelaide.” 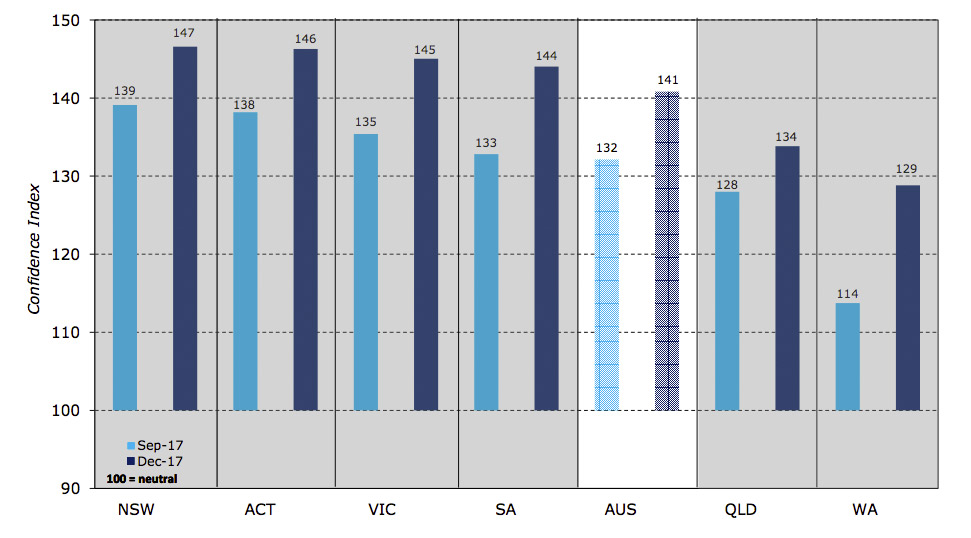 Confidence levels in the SA property industry are at 144 point – the highest on record. Image: Property Council of Australia/ANZ

Gannon said $2.1 billion worth of residential development under approval in the CBD helped boost confidence, as did developments in Bowden, Glenside and Port Adelaide, and the federal government’s multibillion-dollar investment in shipbuilding.

The survey, taken in September, reveals SA’s property industry is also more optimistic about the national economy than its interstate counterparts, and the second-most confident in the performance of the Federal Government. 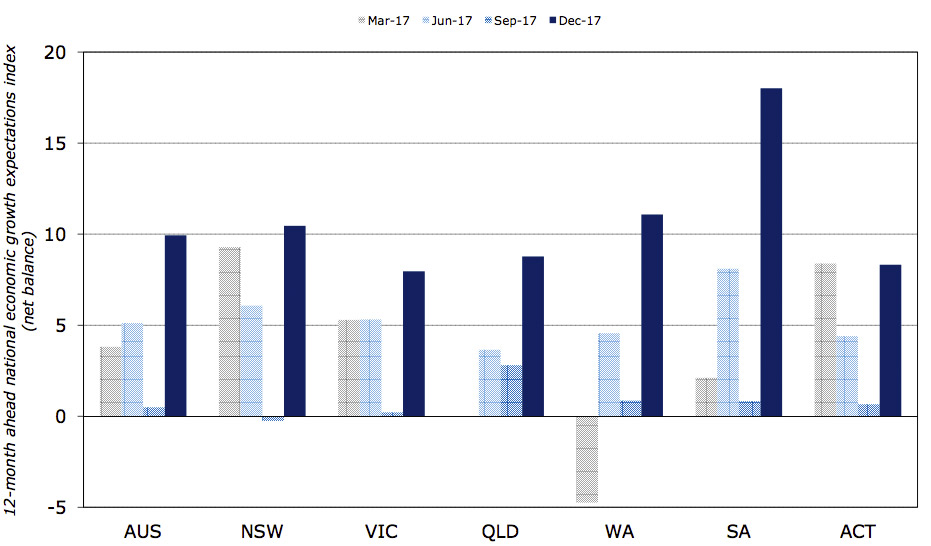 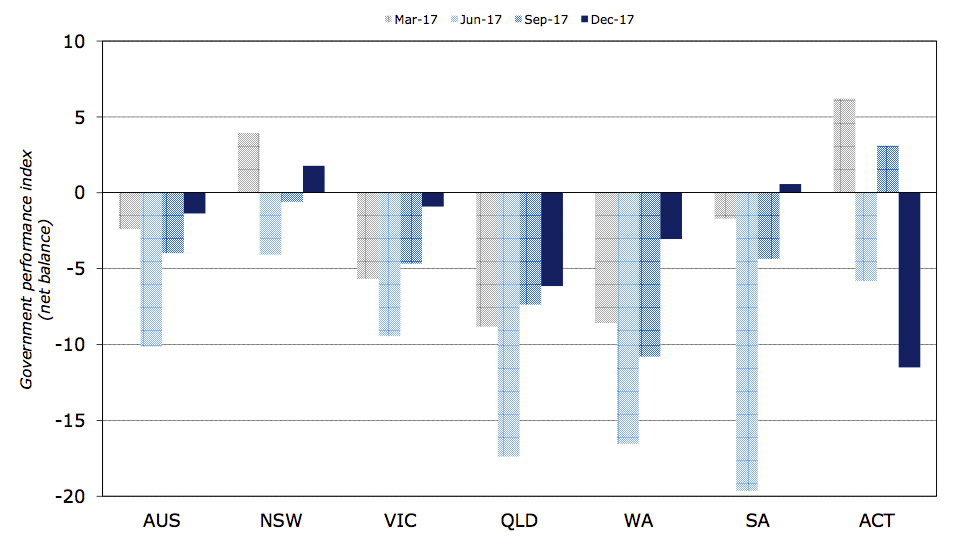 The SA property industry is the second-most confident in the performance of the Federal Government. Image: Property Council of Australia/ANZ

Yet South Australia’s property developers are, by contrast, the most pessimistic of any in the country about their home state’s economic performance, and the least impressed by the State Government’s performance. 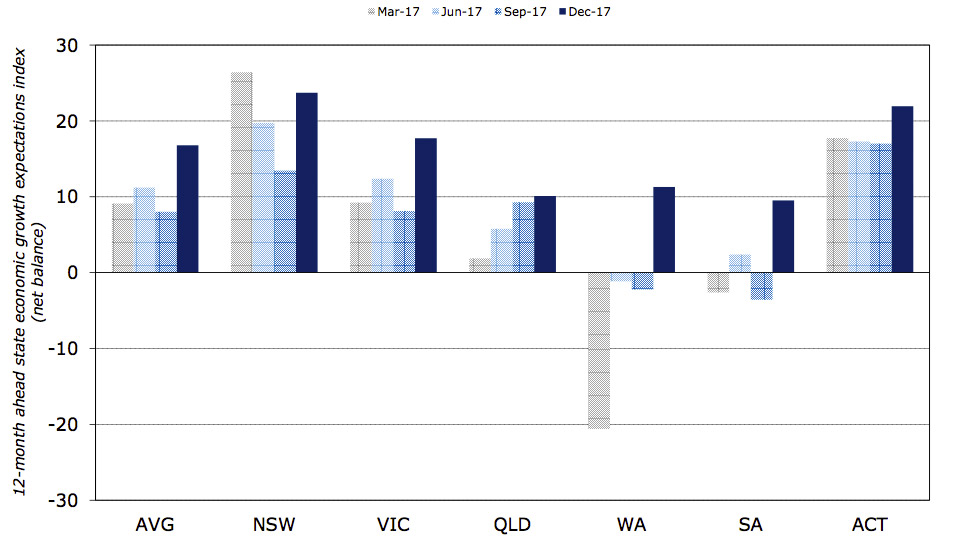 Despite record confidence in its own future, the SA property industry is less confident state economic growth than its interstate counterparts. Image: Property Council of Australia/ANZ 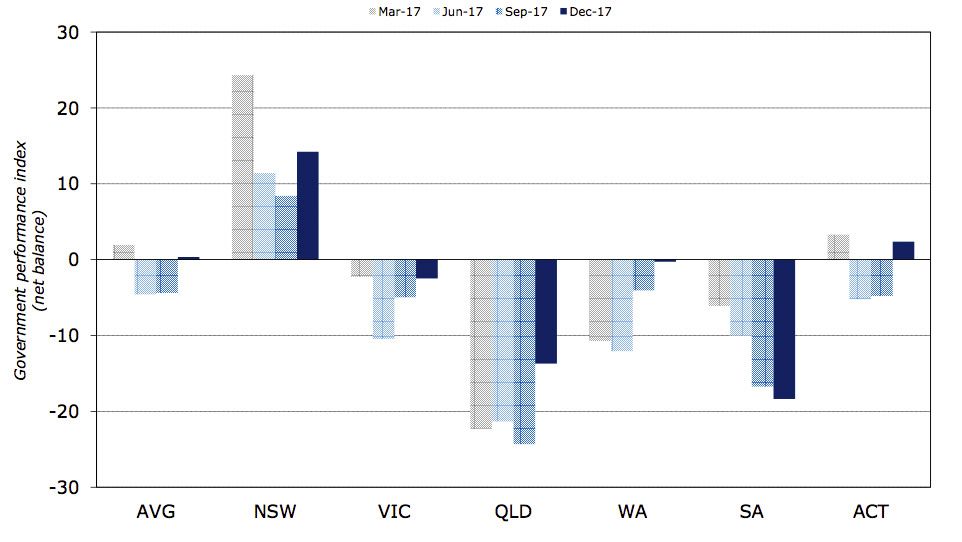 The SA property industry is the least satisfied with the performance of the State Government, compared to interstate counterparts. Image: Property Council of Australia/ANZ

“The State Government is providing significant support to this sector – we have slashed stamp duty on commercial property transactions by two-thirds, and will be abolishing it entirely next year,” he said.

“The Budget Measures Bill also includes stamp duty concessions of up to $15,500 and pre-construction grants of $10,000 for purchasers of off-the-plan apartments, which is why the Bill must be passed in full.”

He added that the report was new evidence that opposition to the State Government’s bank tax was based on falsehoods.

“This is yet another economic report that proves the claims made by the banks’ in their smear campaign about the SA major bank levy are false,” he said.

“The banks claim confidence is falling, yet this report from ANZ shows it to be at its highest level on record.

“It follows a report from NAB on Tuesday that found business confidence in SA rose last month, and our business conditions are the best in the nation.”

Koutsantonis said banks should pull “misleading ads” from the media “and focus on defending the thousands of charged of money laundering levied against them”.

Gannon conceded it was a “paradox” that much of the work coming to the property sector was the result of State Government investment, yet confidence in the Government’s performance was low.

He said: “While industry is expecting a lift in office, industrial, retail and retirement living construction activity levels, it is not overly optimistic about the State Government’s management of it.”

“Our state needs to diversify its investment … to (include) more private investment,” he said.

Foreign investment in residential, commercial, retail, industrial and hotel properties has been lower in South Australia during the past three months than in any other state.

“Business conditions in South Australia could be a lot better.”