The proposal would have required a lengthy retaining wall along North Terrace in front of Parliament House.

Before Adelaide lost its extensive tram network in the late 1950s, carriages could turn left and right, from all directions – known as a grand junction – at the intersection of North Terrace and King William Street (pictured above).

Last month the Government revealed that commuters using the North Terrace tram extension – currently under construction – can expect no such luxury.

Tram users coming from the south will have to alight on King William Street, walk to a Gawler Place stop and wait for a tram travelling along North Terrace to travel to the city’s East End. Alternatively, commuters could alight at the tram stop in front of the Adelaide Railway Station to wait for an east-bound tram.

A source with direct knowledge of the Government’s deliberations on the North Terrace tram extension project has told InDaily a grand junction was considered for the key crossroads – but rejected because it would have cost about $20 million extra, blowing out the project’s budget to $100 million.

According to the source, this would have also required the construction of a 600-700mm retaining wall and a replacement of the tram tracks bisecting North Terrace in front of Parliament House. This would create a flatter approach to a turn at the northwestern corner of the intersection with King William Street.

The grand junction that used to exist there did not require any such retaining wall because Adelaide’s historic trams had a higher tolerance for steep inclines (but were inferior in a multitude of other ways). 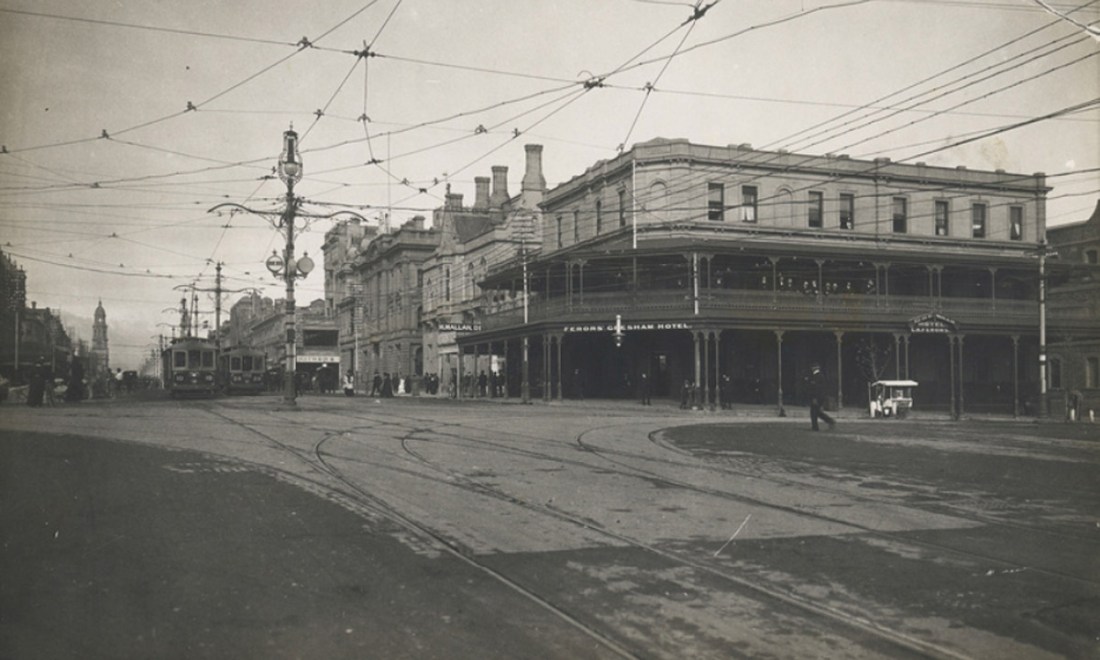 A view from the north-east corner, showing the grand junction that used to exist on the North Terrace / King William Street intersection. Photo: State Library of South Australia

But University of Adelaide senior lecturer in geography Dr Jennifer Bonham, who specialises in urban mobility and processes, told InDaily cars should not be given priority there.

“The last thing you want is a whole lot of through-traffic through your city,” she said.

“I’m not actually concerned about motor vehicle traffic not being able to get through the city easily … I don’t think that’s an issue at all.

“Your priority needs to be public transport and walking.”

University of South Australia senior lecturer and transport planning expert Dr Andrew Allen told InDaily commuters deeply “resent” having to transfer between one transport mode and another, and that many will choose to walk to the East End rather than board another tram at North Terrace.

“They really resent it (transfers) … because you have got the wait time and you’ve got the hassle,” he said.

“By the time you have worked out what to do, you can probably walk there.”

He said omitting the right-hand turn was also problematic for commuters with impaired mobility.

However, Transport Minister Stephen Mullighan told InDaily in a statement that “creating a junction with most or all turning movements for trams at the intersection would cause delays for all the other trams and road traffic at one of Adelaide’s busiest intersections, with approximately 60,000 vehicle movements a day.”

“Like any other major city that has an extensive tram network and multiple lines there is a need for some commuters to transfer depending on their final destination,” said Mullighan.

He added that the Government’s plans to expand Adelaide’s new tram network, AdeLINK, would ensure “seamless” transfers between services.

“It should be remembered that this extension is just the first stage of EastLINK, with future stages planned through Kent Town to the eastern suburbs,” he said.

“As further expansions occur there will be more lines and more destinations.

“Our careful planning will ensure passengers will be able to transfer seamlessly from one service to another.”

“It’s just the practicality of how that intersection operates (… that) if you slow traffic down there, you’ll slow traffic right through the city,” he said.

“I could see why they wouldn’t make that movement (in all directions) possible.”

But Bonham said the decision to omit a grand junction at the intersection reduced the options for “seamless” future tram routes.

“It’s not as seamless as you would probably want … it would be much more convenient if the tram would simply take a right turn (towards the East End),” said Bonham.

“It just limits what you can do with your tram network.”

Dr Allen said that depending on the frequency of the service, trams turning right into North Terrace from King William Street “it probably wouldn’t add too much to traffic”.

However, if the service was to operate very frequently – say, every three minutes – then there would be a significant impact, he argued.

Bonham added that the changeover between trams on King William Street and North Terrace would have to be planned well to maximise the usefulness of the service.

“If that changeover is made really convenient, really easy to to then it isn’t necessarily going to be a huge issue,” she said.

“If it’s difficult for people to go off of one tram and get onto another, then it’s going to be problematic.”

The project is due complete by early next year.