As InDaily forecast in August, the world’s largest smartphone app-based bike-share company, ofo, has rolled out 50 of its distinctive yellow bikes around Adelaide, the first city in Australia to host the service.

The “dockless” bike share scheme, developed in Beijing, allows users to find and hire bikes using the ofo mobile app, and leave them wherever their journey ends – rather than having to return them to a particular location.

The service costs $1 per half hour, capped at a maximum of $5 for a single trip. 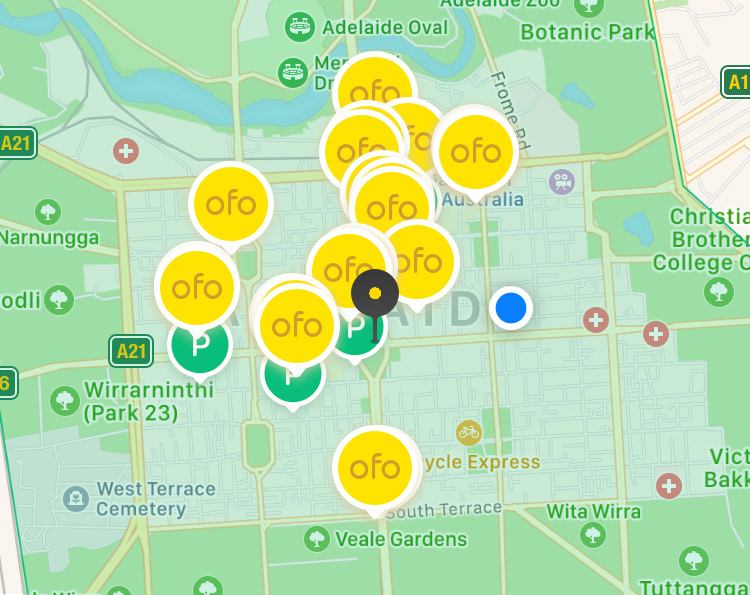 A screenshot from the ofo app shows the location of several available bicycles this morning.

Ofo’s Adelaide incursion means the future of the city council-sponsored Adelaide Free Bikes scheme is under threat. That free scheme requires cyclists to return bikes to dedicated locations around the city.

Earlier this year, Adelaide city councillors agreed that if a commercial operator were willing to set up a private bike-share network in the CBD, Adelaide Free Bikes – popular with tourists and visitors – should be shut down.

Councillors Houssam Abiad, Megan Hender, Phil Martin and Anne Moran told InDaily this morning that they remained of that view.

The council’s contract with Adelaide Free Bikes, managed by BikeSA, comes up for review in December.

A staff report presented to a city council meeting earlier this year said that the 221 Adelaide Free Bikes were “nearing the end of their useful economic life, with some being over 10 years old”.

Ofo’s Adelaide launch also means that $1 million worth funding from the State Government and the council’s 2016 cycling infrastructure deal, which had been set aside to establish a public “point to point” bike-share scheme, will instead be used to build higher-quality separated bikeways.

Council director of operations Beth Davidson-Park told InDaily this morning: “Given the expansion of privately operated dockless bike-share, council and the State Government will now review how these dedicated funds can be used to further support bike infrastructure within the city.”

A spokesperson for Transport Minister Stephen Mullighan told InDaily this morning that: “Together with the City of Adelaide, we will carefully monitor the pilot program and if successful will consider other cycling initiatives or infrastructure to invest the $1 million originally allocated for a bike-share scheme.”

“We are supportive of new innovative companies choosing South Australia as the best place to launch their business,” the spokesperson said.

“The ofo pilot will provide crucial information regarding dockless bike-share and its operations in Adelaide.”

The Government, the council and the company will be hoping to avoid a repeat of last week’s spectacle of dozens of bicycles – owned by another bike-share company, oBike – being fished out of Melbourne’s Yarra River.

Ofo will use a “credit system” – similar to Uber’s star-rating system – to penalise riders who misuse its Adelaide bikes.

…no authorisation by council elected members, at all.

Moran – who describes the lack of a designated station to which users must return the bikes as both the greatest advantage and a “fatal flaw” in dockless bike-share schemes – says she is “furious” that council staff issued the “permit” without directly consulting the council.

She claims Lord Mayor Martin Haese was blindsided by the decision – and was only informed of it on Friday last week.

There was “no authorisation by council (elected members), at all” for the accreditation, she said, arguing it would be more prudent for the council to wait and see how Melbourne authorities responded to bike-share bikes being misused.

“Let’s see what they do,” she said

“Let them be the test case.”

Ofo Australia head of strategy Scott Walker said the claim that Haese was blindsided by the decision was “not true”, and that both the council and the State Government “had specific knowledge” of ofo’s plans for Adelaide – including how many bikes it planned to roll out – for months before today’s launch.

Senior council staff were unavailable to respond to queries about the authorisation of the permit, as was Hease.

Earlier this year, a city council committee had authorised its administration to investigate the possibility that a private operator could provide the service.

Moran said ofo was a “potentially terrific” service for Adelaide because it allowed cyclists to take and deposit bikes anywhere, but this was also its “fatal flaw”.

But Walker told InDaily the service had key advantages over other bike-share applications to discourage illegal disposal of bikes and vandalism.

He said users in Adelaide were bound by a “geofence” – a virtual boundary containing the CBD and North Adelaide – and that they would be deducted “20 points” in the app if they leave a bike outside the zone for more than 12 hours. New potential customers are unable to use the bike if it is outside the geofence.

Users start with 100 points and accrue one new point with every trip.

Walker said there was also a 24/7 customer service hotline displayed on each bike and that the app displayed “preferred parking zones” to discourage users leaving bikes in the way of pedestrians or road users.

Meanwhile, a cyber security expert is warning that bikeshare networks are vulnerable to hacking, and that users’ financial details could be at risk of being exposed.

Last week, Chinese authorities reportedly arrested two people suspected of hacking into the accounts of dozens of users of an unnamed bikeshare service and stealing their money.

“This leaves users at risk to theft, whether it be financial or their personal information.

“As such, it is incredibly important we start bringing security thinking into the planning and design phase, particularly as more products continue to be connected to the internet.

“Companies should look to continuously test and review the security of new products, through application security reviews and penetration tests.”

However, Walker said ofo users should feel confindent inputting their financial details into his company’s app.

“Our data is stored in Silicon Valley,” he told InDaily.

“Ofo only collects quite limited information on their users.

“(And) we allow all users to have one ride free without … having to provide their personal financial information.”