Bell, who had served as the Liberals’ parliamentary secretary for regional services, was defiant today, telling reporters outside his electorate office that was “blindsided” by the charges, which he will face at Mount Gambier magistrates court on Tuesday.

He quit the party yesterday, having told leader Steven Marshall about the impending controversy last Sunday.

He faces multiple charges relating to his time at the helm of Mount Gambier’s Independent Learning Centre, following an investigation by the Independent Commissioner Against Corruption, Bruce Lander.

However, Bell is adamant he is innocent and will continue to serve as an independent, at least until the state election next March.

Premier Jay Weatherill today demanded he resign from parliament altogether, and lashed out at Marshall for not making the same call.

“It will be alleged that the 43-year-old man from Mount Gambier dishonestly dealt with a substantial amount of public money. It will be further alleged that the public officer used documents known to be false, with the intention of claiming a benefit for himself. The alleged offending is said to have occurred between 9 July 2009 and 18 March 2013.”

Today, Lander confirmed that his statement referred to Troy Bell, following an overnight report by Nigel Hunt in the Advertiser.

The developments are a body blow for the Liberals, who late yesterday reopened nominations for preselection in Mount Gambier – a seat they only won back in 2014 after it was held by successive independents since 1997.

Bell said today he was “disappointed… that eight years ago some thing is alleged to have occurred, and now seven months before the next state election charges are being laid… that leaves me no time to defend myself”.

“I’ll be heading into the next state election with a dark cloud over my head,” he said.

“These are 26 serious charges [and] it’s unknown whether or not I’ll even stand at the next state election.”

However, he insists: “I won’t quit parliament – I’ve done nothing wrong.”

“I’ll hold my head up high, and I’ll continue to serve the people of Mount Gambier as an independent up until the next state election… we’ll decide what we do from there.”

He said Marshall had been “very supportive”.

“I made it very clear I wanted to resign; I didn’t want this to be a distraction for the Liberal Party team heading into the March election,” he said.

“They need clear air and I didn’t need to be a distraction [so] I’ve resigned from the party, but the support has been fantastic.”

Marshall faced the media today, insisting he had no choice but to keep silent about the impending court case – and admitting he had no intention of making the matter public until after Bell fronted court next week.

“I was not in a position to do that, because this was a matter which was before the ICAC and I’ve only received confirmation from Bruce Lander this morning that I can speak on this matter,” he said.

He conceded he had not sought advice from Lander before today.

Asked if he sought his own legal advice, Marshall said: “We took a very close look at the ICAC Act and what we could or couldn’t talk about.”

“The advice I received was we couldn’t name [Bell] and couldn’t talk about the fact there had been an ICAC investigation.

“It would have been prejudicial if we’d have made that announcement to the people of SA that he was facing those charges.” 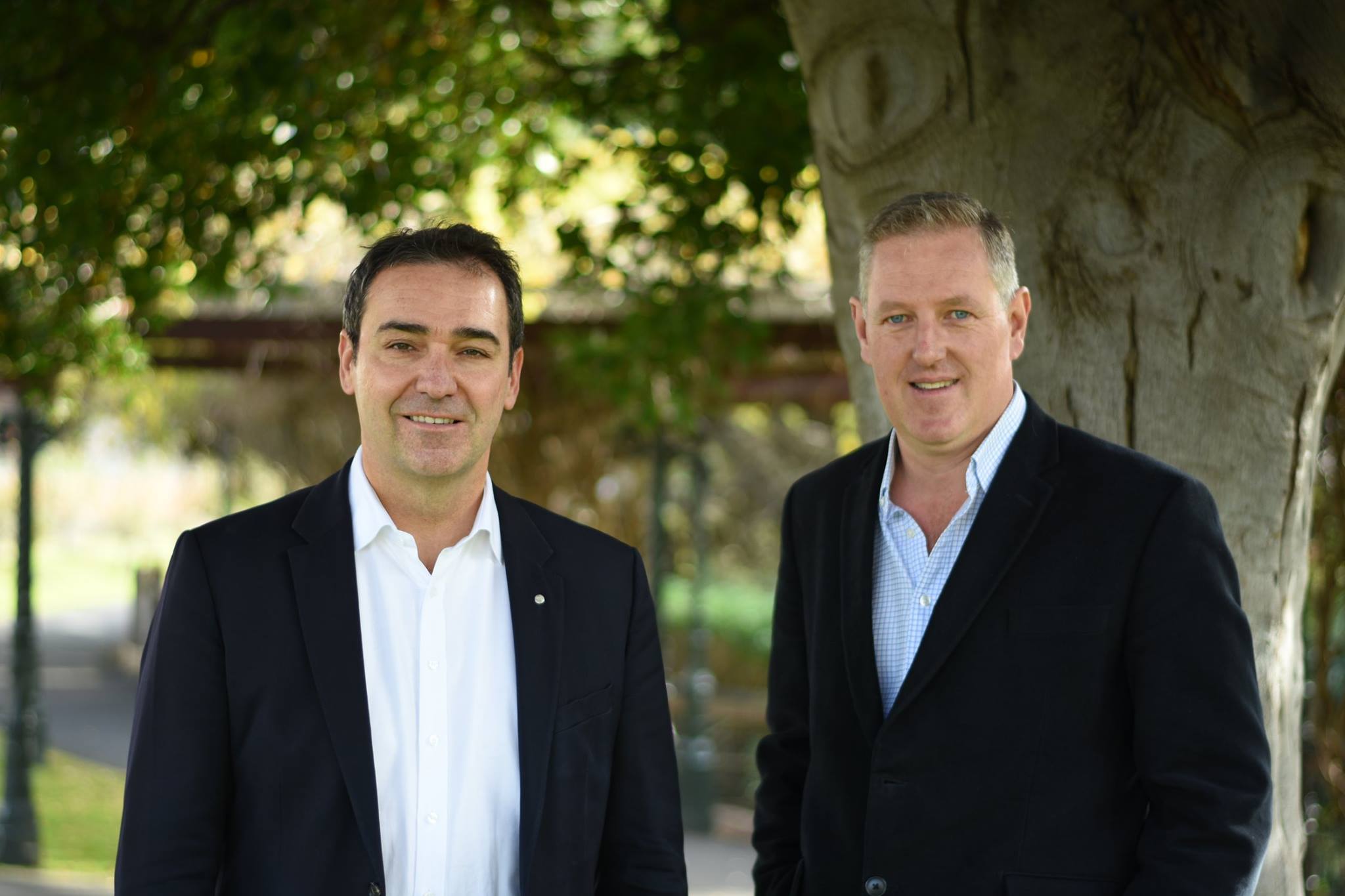 However, despite four days elapsing between his first conversation with Bell and the MP’s written resignation from the party, Marshall insists: “We moved very swiftly.”

“It was something which was going to be a serious matter… it’s a complex issue and it’s a very serious issue and we wanted to understand the detail of it,” he said.

“We first spoke about this issue on Sunday… [Troy] made it clear that the details would be forthcoming on Tuesday [and] that detail didn’t become available until Tuesday when the ICAC commissioner published his findings from his investigation.

“Once we considered that, on Wednesday I spoke to Troy Bell… it became very clear that he couldn’t continue as the Liberal Member for Mount Gambier. I asked for his resignation and he provided it the next day… and at 4pm yesterday afternoon state executive confirmed they’d be accepting his resignation.”

Asked whether Bell should now resign from parliament, Marshall said: “That’s a matter for Troy Bell.”

He said “at no point” was Bell advised not to quit the parliament to avoid a by-election.

“No, absolutely not – there’s no suggestion that’s occurred,” he said.

“Troy Bell has been adamant since day one that he’s innocent, but the magnitude of these charges made it very clear court proceedings were not going to be put in place and resolved prior to the next election.

“I formed the opinion that there was no way he could remain as the Liberal candidate at the next election.”

Marshall conceded it was a bitter blow for a Liberal Party hoping to end 16 years of Labor rule.

“Certainly anything but ideal,” he agreed.

“But the fact of the matter is we’ve got a preselection underway, and we’ll do our best to find the ideal candidate for the seat.

“I think this is an extraordinary outlying issue… I don’t think anybody can say this is systemic to the Liberal Party.

“It’s not ideal but we’ll recover, we’ll preselect our candidate and we’ll go to the next election fighting for a change in Government… of course it’s disappointing, it’s not ideal – but we’ve acted decisively.”

However, he was less decisive about Bell’s future, saying it was “a matter for him”.

“I support the presumption of innocence until proven guilty,” he said.

But asked whether he believed it was appropriate for Bell to remain an MP, Marshall said: “Look, I do… I think he’s so adamant about this situation, he’ll be in court next Tuesday… let’s see what happens then.”

He said he would not refuse to accept Bell’s vote, as Liberals argued Labor should when then-MP Bernard Finnigan was facing criminal charges relating to obtaining child pornography.

“No, I don’t have any plans to (refuse his vote) at this stage,” Marshall said.

“He’s an independent member, he can vote according to what he believes [and] his beliefs are very much aligned to the Liberal Party.”

Weatherill today launched a scathing attack on Marshall, saying the Liberal leader had “shown again that he can’t lead in a crisis”.

“He dithers and then hides, and this is a pattern that we’ve seen over and over again,” Weatherill told reporters this morning.

“No wonder nobody knows what he stands for or what he’s going to offer the people of SA.”

Weatherill said he would have “immediately sacked Troy Bell, demanded the party expel him at earliest opportunity and demanded he resign from the SA parliament”.

“Steven Marshall has not done those things,” he said.

“There are no legal restrictions on his capacity to do all of those things.

“What I call upon Troy Bell to do today is to resign from the South Australian parliament – this is precisely what I did when a Labor MP [Finnigan] was in the same situation.”

He said all Marshall’s actions reflected the interests of the “convenience of the Liberal Party”.

“It’s been entirely about what’s good for the Liberal Party and what will advantage him in the lead-up to the next election… it wasn’t about doing the right thing, it was about making sure he preserved his chances.

“Steven Marshall has shown again that he’s a weak leader… he should be putting the pressure on [Bell] to resign from parliament, and I’ll certainly be doing so.”

Bell will now sit on the crossbench – which, he noted, “seems to be growing at the moment” with the recent resignations of Duncan McFetridge and Frances Bedford.

“I’ll represent my community as an independent… there’s many things I want to make sure we receive down here because, quite frankly, we’ve gone without for a long period of time.”

“These allegations make me feel sick to my stomach and I am in a state of disbelief and shock,” Bell said.

“I completely deny any dishonesty or wrongdoing.

“I am not going to run and hide from this, I think the people of Mount Gambier would be disappointed if their member cut and run as soon as the going got tough.”

He said the charges dated back to 2009, when he was involved in the establishment of youth and social work services in the South-East.

“Over 30 people were employed in over eight different locations, supplying youth, social work and mentoring services across the South East. I dedicated my time and energy to the establishment and functions of this service and delivered services to many disengaged youth in our region, learning centres and schools.”