Liberal MP David Speirs has asked Ombudsman Wayne Lines to look into Coordinator-General Jim Hallion’s decision to strip the City of Holdfast Bay of its power to assess a Hungry Jack’s development on Brighton Road.

The referral is one of a string of complaints about the role of the Coordinator-General, which appear to have spurred the State Government to change its regulations this week.

The change means Hallion can only take developments costing more than $5 million out of the hands local council assessment panels.

The City of Holdfast Bay unanimously rejected the proposed Hungry Jack’s development in 2014 after reportedly receiving a petition from 2000 residents opposing the $1.4 million project. Hungry Jack’s appealed the council’s decision but the Environment, Resources and Development Court upheld it.

However, the Office of the State Coordinator-General later accepted a submission from Hungry Jack’s to refer the proposed project – the cost of which had been re-valued to $3.3 million – to the State Government’s independent Development Assessment Commission (DAC), which later approved it.

Until this week, the Coordinator-General was empowered to refer a development proposal to the DAC only if it was valued at more than $3 million.

But a City of Holdfast Bay rates notice, which Speirs has acquired under freedom of information laws and provided to InDaily, shows the property was valued at $2.45 million in mid-2016, after the restaurant was built.

Speirs said this raised questions about the accuracy of the $3.3 million costing that had allowed the development to be referred to the DAC.

“It’s very unlikely that … you would have a building (for which) the true valuation would be (almost) a million dollars out from the estimate,” he said. 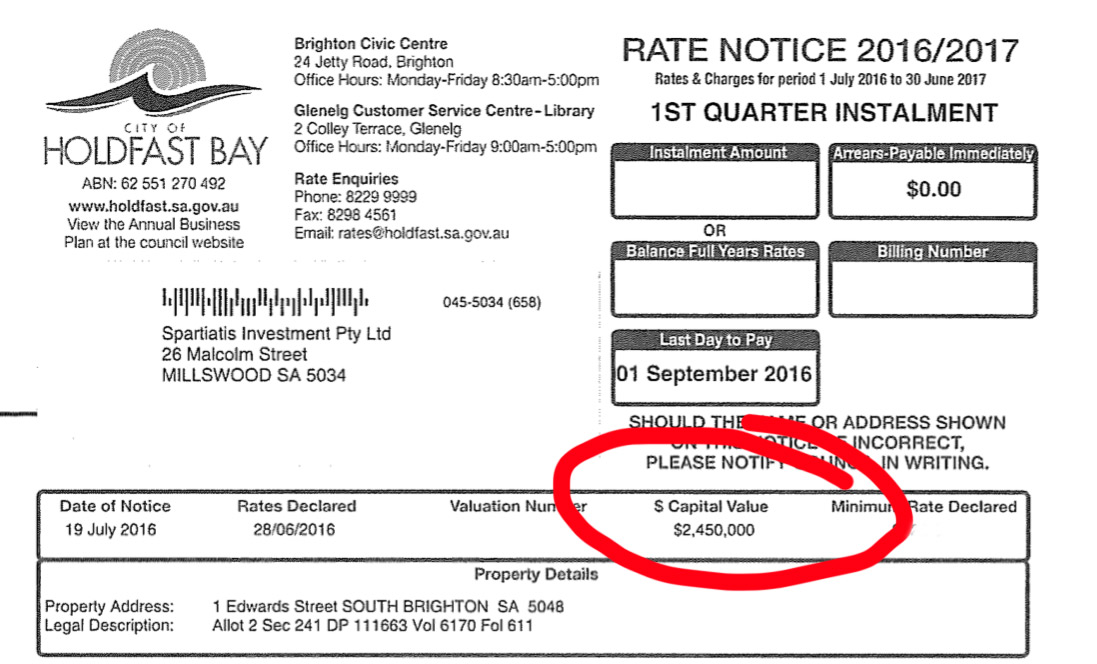 The partially-redacted rates notice shows the property was valued at $2.45 million in 2016.

“It is concerning that there is such a significant discrepancy between these three figures ($1.4 million, $3.3 million and $2.45 million) and I am of the view that there are problems with the process followed by the Coordinator-General to establish the true value of the site,” Speirs’ letter to the Ombudsman reads.

Lines said the complaint had been received, but that no decision had been made as to whether it would be investigated.

Hallion told InDaily this morning that the decision to refer the Hungry Jack’s development to the DAC was “based on a recommendation from the Department of Planning, Transport and Infrastructure”.

“In relation to the cost of works it met the threshold test in the Development Regulations and was verified by a professional Quantity Surveyor report.

“The cost of works in the regulations includes estimated construction costs (including signage, utilities, communication and landscaping), design, preliminaries (including site clearance, demolition and remediation), statutory fees and administration fees.”

He added: “This may differ from other valuations used for other purposes.”

It’s the latest decision of the Coordinator-General to be referred to Lines after the Ombudsman found Hallion had  taken a Peregrine Corporation petrol station development assessment out of the hands of Burnside Council on the basis of “irrelevant” information.

In that case, Lines found a general “lack of rigour” in the process of approving the decision and suggested there was a lack of meaningful scrutiny of the cost valuation provided by Peregrine.

On Tuesday, in response to Lines’ report, the Government increased the value of developments in metropolitan Adelaide that can be referred to the DAC by the Coordinator-General to $5 million.

The amendment also removes reference to the “economic significance” of projects that can be “called-in” by the Coordinator-General to the DAC, and excludes residential developments and subdivisions from being referred to the DAC.

An AM/PM petrol station development for Mount Barker Road in Stirling has also been referred to Lines’ office by local residents, but he is yet to decide whether to investigate it.

The new threshold would have excluded from Hallion’s purview the Peregrine development, the AM/PM petrol station and the South Brighton Hungry Jack’s proposal.

The DAC was renamed the State Commission Assessment Panel (SCAP) at the beginning of this month.