Premier Jay Weatherill announced this week that California company SolarReserve would fund and build a $650 million solar thermal plant for the state, with the backing of a Federal Government concessional loan and a 20-year contract to supply the State Government’s power needs.

The mainstream electricity generation industry has warned that the technology is relatively new and may face issues in its initial phase, but SolarReserve insists it has learned the lessons from the troubles at its Nevada plant.

US media has reported that SolarReserve’s $1 billion Crescent Dunes facility in Nevada went offline last October and only started generating electricity again late last month due to a structural fault.

The same technology, with a larger output, is planned for a site 30km north of Port Augusta.

The technology uses thousands of billboard sized mirrors to concentrate sunlight on to a central receiver at the top of a 220-metre high tower. That process heats molten salt to 565 degrees celsius with the heat used to generate steam, drive a turbine and produce 150 megawatts of electricity, even when the sun doesn’t shine.

The 110MW Crescent Dunes facility started generating power commercially in 2015, but had to shut down in October last year, due to a leak in a tank that holds the molten salt.

According to the Las Vegas Review-Journal, the company played down the problem in December, insisting the plant would be back online and operating at full capacity in January.

Instead, the facility remained offline for another six months.

SolarReserve’s vice president of global communications, Mary Grikas, confirmed to InDaily that the outage was caused by a leak in one of the salt tanks.

She said the lessons from Crescent Dunes would be applied to the 150MW Port Augusta project.

“The leak was due to a construction defect and was repaired with measures taken to mitigate recurrence,” she said.

“The project is back in operation, delivering energy to the grid, utilizing our storage technology to meet high demand periods that extend after dark.

“The Crescent Dunes facility has provided the SolarReserve team with real-world know-how that has led to innovations toward higher efficiency and performance, while simultaneously reducing capital cost – which will be applied to our Aurora project in South Australia.”

South Australian Energy Minister Tom Koutsantonis said the Government was aware of the Crescent Dunes shutdown and he was confident the company would learn from the problems. 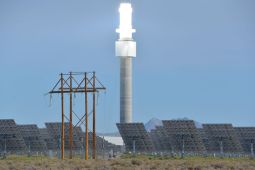 Solar thermal plant to be built in Port Augusta

“This was a construction execution issue and had nothing to do with the technology or the design of the plant,” he told InDaily.

“It also had no impact on the Crescent Dunes’ power supply contract.

“The State Government is confident in Solar Reserve’s learnings from that project and the measures put in place to prevent it happening again.”

“We need to remember this technology is still developmental,” Warren told InDaily.

“It may not be operating all the time as it beds down, and it’s still a relatively small station in a large grid.”Save