More than 600 medical staff and interested parties packed the Adelaide Convention Centre in November 2014 to hear the about the massive change planned for South Australia’s hospital system, and to be heard.

But as major changes began to roll through the system, doctors’ enthusiasm soured into suspicion.

“The trust of clinicians and community so necessary to implement such broad sweeping changes was quickly eroded as it became clear that the focus by Government and SA Health … prioritised economic rationalism rather than clinical, patient and community (outcomes),” says Mulholland.

“Within a short period, clinicians questioned the motivation of the Transforming Health (program) and recognised the potential devastation of health services to their local community and adverse clinical outcomes.

“What absolutely concerned me was the damage that was caused to the relationship … between the administration and medical officers.”

Data provided by SA Health didn’t match what some doctors believed to be happening on the ground, and when concerns about the accuracy of data were raised, many felt they were not being listened to.

Clinicians felt under pressure from administrators “who now referred to clinicians providing any opposition as ‘naysayers’ and dismissed any feedback that did not support change”.

“The process undermined trust and created a divide between Government … and clinicians which won’t be forgotten for some years.

“Trust in the administration now lost through this process will be difficult to earn back from many clinicians.”

SA Health has held regular forums to discuss Transforming Health with unions including SASMOA, the Australian Nursing and Midwifery Federation (ANMF) and the Ambulance Employees Association (AEA) throughout the process.

But, according to Mulholland, “in all the time that (SA Health CEO) Vickie Kaminski has been in that job, we’ve met her twice.”

Asked how SA Health had allowed the relationship to deteriorate so dramatically, Kaminski told InDaily that different unions had responded to the process differently, and that many doctors have been highly supportive of Transforming Health.

“SASMOA’s had a tougher time wrapping their head around it (than other unions) but I think that’s because it’s individuals, it’s – I understand it – (doctors’) livelihood, it’s their place of work and you’re changing that.”

Transforming Health clinical ambassador Dorothy Keefe tells InDaily: “There are many members of SASMOA who are actually very supportive of what’s happening.”

“And I think SASMOA’s been struggling a bit because of the differing views within its own membership. Of course, unhappiness makes better media than happiness.”

Mulholland tells InDaily she is disappointed the administration is “still bashing SASMOA”.

“It isn’t constructive. I find it unhelpful,” she says.

“It maintains the relationship that we don’t want.”

It’s clear, however, that any large-scale hospitals overhaul was never going to be easy for SA Health to manage.

Late last year, the department accepted the recommendations of a scathing review into the operations of the Central Adelaide Local Health Network, which oversees the Royal Adelaide Hospital and the Queen Elizabeth Hospital, among others.

That report found medical staff were largely resistant to change, “instead retaining a culture which is rooted in a mid-20th century view of the profession, of their relationship with the organisation and of care delivery”.

There was “no stigma” against clinicians assuming someone else will take up “the mantle of change management”.

And “when effective medical leadership is absent, change is inevitably difficult, lacks traction and sustainability, and is often associated with overt displays of anger and sometimes unprofessional behaviour”.

Many doctors interviewed for the review reported that “theirs was a resistant culture, a culture which rewarded and encouraged stasis rather than genuine change and a culture which had failed to come to grips with the reality of a resource constrained system”.

There were, however, some “clear exceptions” to the change-resistant culture the report describes, “characterised by the effective leadership of doctors who as a result have been able to bring others to a shared view that change is both important and desirable”.

The problem for South Australia’s ambulance service, meanwhile, has not been the pace of change, but the lack thereof.

With major specialist services to be consolidated within the state’s largest hospitals under Transforming Health, more patients would have to travel farther, often in ambulances, to receive “Best Care. First Time. Every Time.” (as the Transforming Health mantra goes).

The ambulance service was to be a major beneficiary of the program.

A $16 million package was promised, with new ambulance stations, new vehicles and more paramedics to help the ambulance service cope.

However, asked to describe the major successes of Transforming Health, Ambulance Employees Association General Secretary Phil Palmer tells InDaily, “from an ambulance perspective, none at this stage”.

“We don’t have any extra ‘boots on the ground’ yet, due to (SA Health) / Treasury refusing to release funds until it was too late.

“Recruiting should have started 18 months ago at least but did not start until early this year.

“It requires a 12-month long internship to make a degree-qualified graduate –road-ready, with authority to practice as a paramedic.”

Palmer says paramedics’ workload continues to climb and “it is already beyond SA Ambulance capacity to cope”.

“Blown-out response times are now the norm, and there have already been two deaths that had 23-minute plus responses to cases that should have been attended in eight minutes,” he says.

Premier Jay Weatherill’s announcement in June that Transforming Health would come to an end with the opening of the new Royal Adelaide Hospital (early next month) and the closure of the Repat (due before the end of the year) came as a surprise to the AEA.

“We heard it in the news,” says Palmer.

“We do not at all accept that the process is complete.

“There has been no improvement in patient flow through hospitals; the discharge system remains inefficient, emergency departments are more overcrowded than ever, and ramping is the worst we have ever seen in South Australia.

“The policy formerly known as Transforming Health was rebranded well before it’s work was done.

“The negative public reaction was a result of the failure of (SA Health) to bring their workforce, and the public, with them.

From the beginning, nurses were expected to be among the major losers out of Transforming Health.

South Australia has the highest number of nurses per head of population in the country – a fact noted regularly in public statements by Health Minister Jack Snelling.

But Weatherill told ABC Radio Adelaide this morning that his government was “proud” of that fact – and major clear-out of nurses simply hasn’t come to pass in South Australia, or not yet.

ANMF SA Branch CEO Elizabeth Dabars said late last year that her union had secured a commitment from the State Government that there would be no forced redundancies of nurses as a result of Transforming Health.

Kaminski tells InDaily job numbers have been going in the opposite direction: “There’s been displacement, where nurses have moved around the system, (but) I think overall we’re trending up.”

“We’d like to, at some point, get down to the national average, but what we’re trying to do right now is the location of service, and being able to make sure we’re able to have the right service, right place, right time.”

Kaminski said the evaluation of Transforming Health would shed further light on the outcomes of the program. 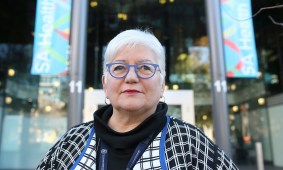 What has Transforming Health actually achieved?

“We have engaged people to do that evaluation for us, to be objective and third-party,” she said.

“We’re asking them to be frank.”

This is the second in InDaily’s two-part series on Transforming Health.

You can read part one here.