However, he said the state would also need the Tesla battery facility in place.

The clock is ticking on that project, with the Government gazetting development exemptions for the Hornsdale site, near Jamestown, this week. The starting gun for Tesla’s promise to build it in 100 days or its free, has not yet been fired, with the Government waiting on a grid connection agreement with the national energy regulator to be completed.

The Government has also freed the planned sites for its back-up generators from the constraints of the Development Act, gazetting exemptions this week.

The Advertiser reported today that the maximum capacity of the new generators, to be installed near the desalination plant and the Holden factory before summer, would lose 25 per cent of their maximum capacity of 276MW in extreme heat – the circumstance in which the generators would be most-needed.

However, Koutsantonis said the drop in capacity had been factored into the Government’s considerations, because it was well-established that hot weather affected most machinery.

The nine GE TM2500 generators, to be leased from APR Energy, would be sufficient to meet predicted needs over summer, even when operating at their minimum capacity of 205MW, when added to the output from the 100MW Tesla battery, promised for the state’s mid-north before summer.

“This is the biggest beat-up since the first pavlova was made,” Koutsantonis told InDaily.

He said the capacity of the generators drops to 227MW at 40C, with the minimum scenario kicking in at 46C.

The back-up generators, which Premier Jay Weatherill foreshadowed could be bought by the state and connected to gas after the initial two-year lease period, are part of the Government’s plan to avoid the kind of load-shedding that occurred in February this year.

About 90,000 South Australian homes and businesses lost power on a day of extreme heat in February, when AEMO ordered load shedding to avoid damage to the state’s electricity infrastructure.

Koutsantonis insists the combination of generators and the Tesla battery would be sufficient to avoid a similar incident this summer.

“We are going to meet our (AEMO) reliability ratings this summer because of our investment,” he said.

However, he added that some major disaster – such as Torrens Island power station being totally out of action – would mean the state would be in “trouble”, but that situation had been the case since the 1960s.

“If the interconnector goes down (as it did during the state-wide blackout last September), we are going to be okay,” he said.

“The state will have enough capacity to look after itself: we will be self-sufficient.

“An explosion, terrorist attack, earthquake – something out of the ordinary – then no system has the redundancy to deal with that.”

Liberal energy spokesman Dan van Holst Pellekaan accused the Government of being “evasive” on both the capacity of the generators and their cost.

“The Premier was totally silent on the fact the 276 megawatts of diesel generation dropped to just 205 megawatts on days of 40 degree heat – precisely when they will be needed most,” he said.

“The Weatherill Government has been equally evasive about the total cost to the taxpayer of the same dirty diesel generators.

“It’s not good enough for the Premier to claim his plan to buy dirty diesel generators falls within the budget of the $550 million power plan, but refuse to reveal the cost of either the diesel generators or the lithium battery.”

Meanwhile, the Government this week started to clear the regulatory ground for the battery facility and the two sites for the back-up generators.

Planning Minister John Rau gazetted notices to exempt each of the sites from the requirement for development approval under the Development Act.

A spokesperson for Rau said that once the sites were identified, the Minister “sought detailed advice on the land use impacts of each proposed site prior to the exemptions being granted”.

“The Minister was satisfied that any impacts from a land use perspective (for example, interface issues, visual amenity) were nominal, or could be appropriately managed for each site.” 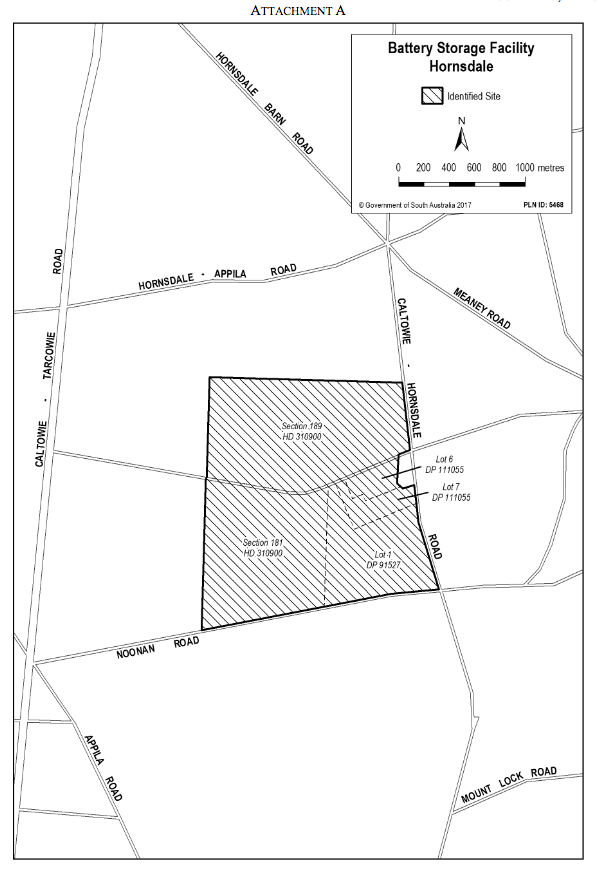 The site of the battery facility from this week’s Government Gazette.

While the Government has given a promise that the trailer-mounted generators will be in place by summer, the connection of the Tesla battery will depend on the company delivering on its promise.

Tesla boss Elon Musk says the battery will be built within 100 days, or it will be free – a circumstance that he says would cost him $50 million or more.

The start date for the countdown is the signing of the grid connection agreement with AEMO – and that hasn’t happened yet, 118 days out from summer.

Koutantonis says the project is on track.

“All activities for the delivery of the battery, including the connection agreements with AEMO and Electranet, are progressing with the project scheduled for commencement of operation by 1 December as planned,” he said.