The bank’s regular survey of SA businesses, the State Monitor, shows that business confidence has fallen to a four-year low since the last survey in February, sparking a warning from BankSA chief executive Nick Reade that the economy faces “serious trouble” if the drop in sentiment continues.

BankSA, which has been a fierce critic of the state bank levy announced in the June Budget, says the monitor findings “show the recent State Budget has contributed to the alarming spike in pessimism among respondents”.

“These latest survey results have no doubt been impacted by the recent State Budget and the Government’s controversial bank tax, which is clearly inhibiting business confidence which in turn undermines investment in South Australia leading to fewer jobs.

“Make no mistake, the bank tax is a huge threat to our state economy. It’s already hindering business confidence and will undermine our competitiveness on the national stage.”

Reade’s comments prompted a furious response from Treasurer Tom Koutsantonis who argued the BankSA survey ran counter to other recent reports on business confidence and investment in SA.

“It’s interesting that Nick Reade is the most vocal in his opposition to the levy and has come up with a survey which suits his agenda,” Koutsantonis said.

“BankSA, which purported to be a South Australian company, is clearly politicising their survey to criticize the state on behalf of their Sydney bosses.

“This tax equates to just 0.3 per cent of the banks’ super profits. Every other business has to pay their fair share of tax – all we are asking is that the banks do the same.

“If BankSA and Nick Reade are truly interested in supporting the economy they should stop running daily ads attacking South Australia.”

However, Business SA also seized on the results to slam the Government’s bank tax.

“With the state recording the nation’s highest unemployment and fewer businesses preparing to take on new staff, we don’t need another bank tax to further damage confidence among business owners, any worker who has a superannuation account, or mum and dad shareholders,” he said. “And we definitely don’t want to deter investment in this State.” 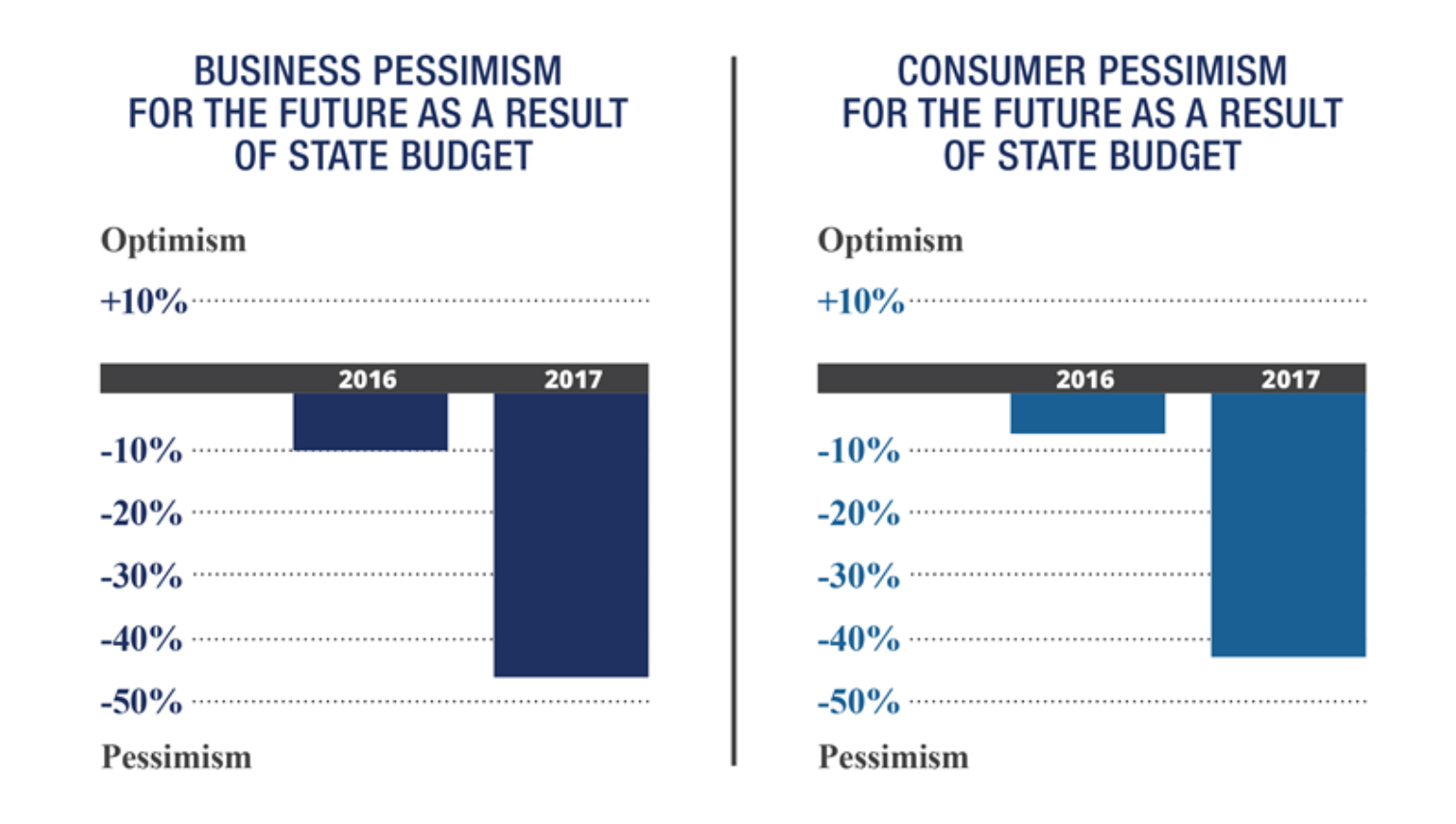 Reade warned the economy could find itself in “serious trouble” if the drop in sentiment continues.

“This concerning drop in business confidence is feeding into an increased reluctance to hire new staff and invest in new technology, which is counter-productive for a healthy economy,” he said.

“We need to put the brakes on this ‘bunkering down’ mentality that an increasing number of businesses have adopted in recent times due to their lack of certainty, because if it takes hold it could easily lead to recessionary conditions down the track.”

Indeed, consumer confidence in lifestyle stability, mood, state pride and the climate for consumer spending in the next 12 months fell to their lowest levels in the 20-year history of the monitor.

The State Government’s bank levy appears unlikely to get through the parliament, with the Liberals and crossbenchers opposed to the $370 million budget measure.

The levy sparked a fierce response from the banks, with BankSA – part of the Westpac group – putting on ice a back-office expansion that would have created 150 jobs.

Koutsantonis said the BankSA survey ran counter to other surveys and reports which showed improving confidence and business investment in SA.

“They include the Deloitte Access Economics Investment Monitor, which showed the value of infrastructure projects in South Australia rose by 6.4 per cent in the June quarter – the largest increase of all states and territories,” he said.

“NAB’s monthly business survey, which was taken after the announcement of the major bank levy, also revealed business confidence in South Australia improved.”

The BankSA State Monitor is produced for the bank by research firm, The Sexton Marketing Group.