That represents a 2.52 per cent pay rise, beating the average wage growth (1.9 per cent) for all SA employees during the same period, and racing ahead of the growing cost of living, as measured by the consumer price index (which rose by 1.3 per cent).

The state’s highest-paid council boss is Dr Mal Hemmerling of the City of Playford, on a total package worth $372,978.

The LGA’s Remuneration Survey Report, released this morning, also reveals the value of CEO benefits beyond the their salary, superannuation and vehicle use.

It lists phone and laptop use, rental assistance, professional association membership fees and “other” – a category that includes Qantas Club, sports club and gym memberships – to bring the total value of the average council CEO’s annual renumeration package to a value of $223,130. 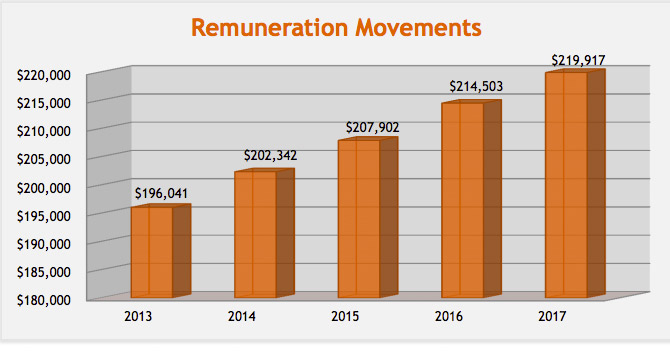 The average remuneration package for council CEOs (salary, superannuation and vehicle use, excluding other costs) has been rising above inflation and broader wage growth for years. Table: LGA.

Asked how councils justified CEO wage growth higher than that enjoyed on average by their constituents, a Local Government Association (LGA) representative said wages were market-driven, and benefits like Qantas Club memberships helped sustain the productivity of CEOs in transit.

LGA executive director of corporate and member services Kathy Jarrett told InDaily: “CEOs are paid in line with their expertise and responsibilities”.

“(They are) responsible for billions and billions of dollars (in) public assets.

“The salaries are very much market-driven.”

Jarrett said that council CEOs work long hours, and that Qantas Club memberships “allow them to continue to do their work while they are on council business (during travel)”.

This table compares average council CEO packages across Australia. The figures are for the total renumeration package. Table: LGA.

The report also notes that only seven out of 67 council CEOs are female.

Jarrett said that while the LGA did not have a formal position on gender balance among council executives, “I certainly think gender balance across any industry is … very important”.

The full report is available to read below, and at the LGA website.