The measure, which is based on spending on new plant and equipment in the March quarter compared with decade averages, showed only SA and NSW had forged ahead of the long-term averages.

The July 2017 edition of the regular business report found business investment in South Australia in March was 7.2 per cent higher than the long-term average, and a huge 19.3 per cent up over the past 12 months.

Overall, the picture is less rosy, with South Australia ranked sixth out of the states and territories, edging ahead of Northern Territory and also leading the bottom-ranked Western Australia.

While the business investment ranking is good news, the state’s next best ranking is fifth for dwelling starts and housing finance.

On the measure of economic growth in the March quarter, South Australia was in sixth place, ahead of Western Australia and Tasmania. However, the level of annual growth was only 1.6 per cent – leaving SA and Tasmania (1.9 per cent) as the worst performers over the past year.

South Australia was ranked second-last for retail spending, but the 12-month figure was more promising with the state’s growth in retail trade up 2.1 per cent – only behind the ACT on 2.4 per cent.

Looking ahead, the report says “the South Australian economy is showing promising signs with investment lifting over the past quarter”.

The State Government seized on the report, claiming it was evidence that its proposed bank tax won’t hurt investment in South Australia.

Acting Treasurer Peter Malinauskas said that despite a scare campaign by the banks, which includes advertisements in local papers and radio, the CommSec report shows business confidence in SA is on the up.

“We are seeing daily ads from the big banks talking down South Australia, yet their own reports and surveys tell a very different story,” Malinauskas said.

The levy, announced in this year’s State Budget, is designed to raise 370 million over four years from the ANZ, Westpac, Commonwealth, NAB and Macquarie banks.

However, the legislation to implement the tax faces an uncertain future, with the state Opposition and key crossbenchers moving to block the budget measures bill in the Legislative Council. 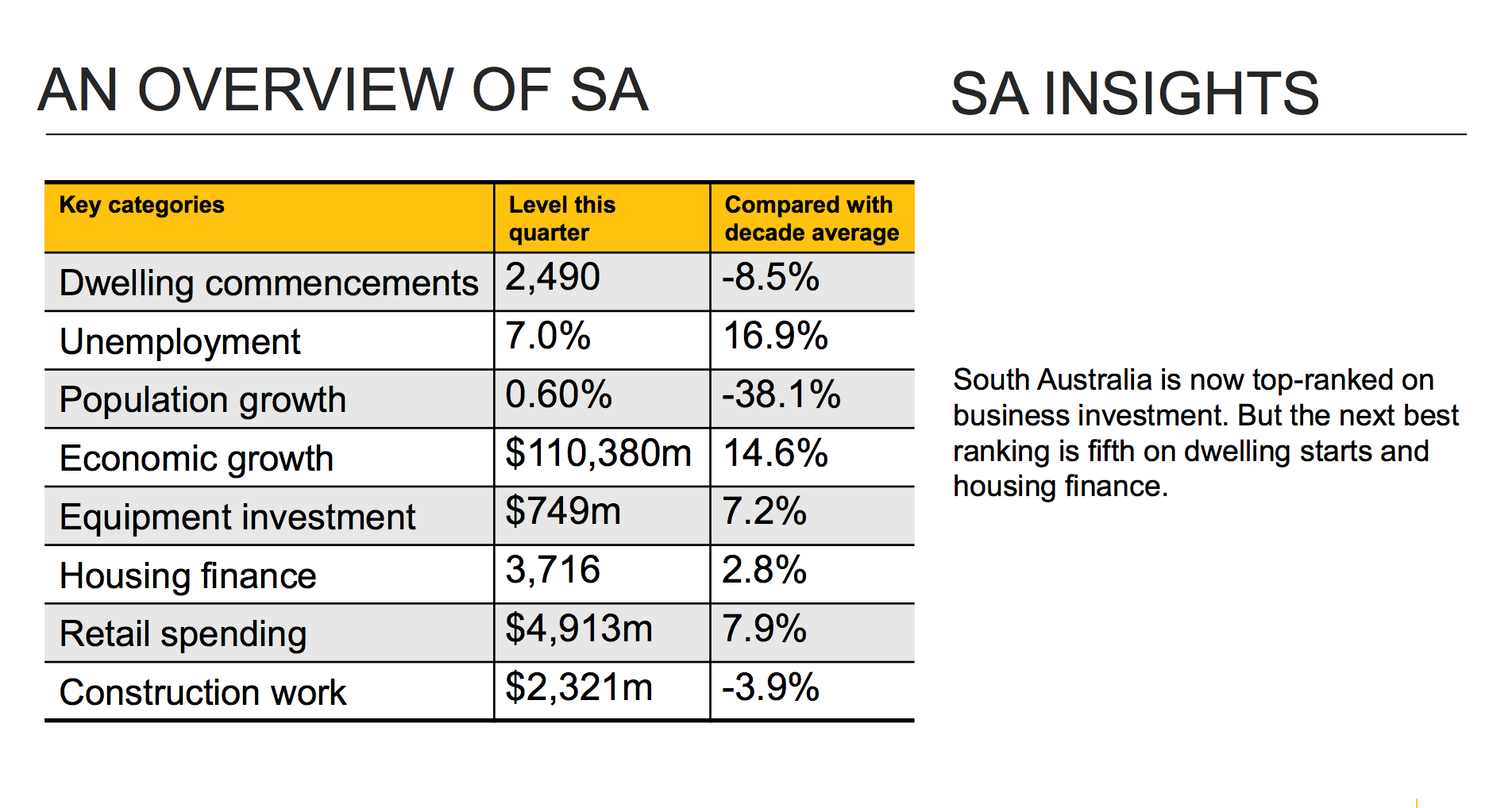 Overall, the CommSec report shows NSW maintained its position as the best performing economy in the country thanks to relatively strong retail spending and residential construction.

Victoria moved up to second place in the June quarter, largely because a softening job market over recent months dropped the ACT to third, while Queensland and Tasmania tied for fourth.

Western Australia is again in last place with annual growth rates below the national averages for all eight indicators considered by the quarterly report.

1. NSW – People are spending the most in NSW with solid housing activity, low unemployment and higher home prices continuing to support spending.

2. VICTORIA – Continues to lead on population growth and comes second to NSW on retail spending.

3. ACT – Housing finance and construction is driving the ACT’s economy.

=4. QUEENSLAND – Benefiting from strong tourism and exports rising at an annual rate of 56 per cent.

6. SOUTH AUSTRALIA – Showing promising signs with investment lifting over the past quarter.

8. WESTERN AUSTRALIA – Continues to show the effects of the passing of the mining boom, but unemployment has eased over the last three months.