As InDaily reported yesterday, the Adelaide Festival has asked the council to keep the structure – which has been described as an “eyesore” by councillors and the Government – on the river “on a semi-permanent basis” until the end of the 2019 program.

In a statement, Adelaide Festival executive director Rob Brookman told InDaily his organisation drastically underestimated the cost of removing the pontoon in the off-season and returning it for next year’s festival.

“The Festival’s original intention had always been to remove the pontoon between Festivals, but as the project evolved and the enormity of the task of moving the pontoon emerged, it became apparent that the cost involved in its removal and reinstatement is way more than originally estimated and crippling to the project as a whole,” said Brookman.

“A requirement to comply with the original condition of removal will in all likelihood see the end of the Palais as a venue for future Festivals which would be an enormous shame.”

Last night, the council agreed to grant the Adelaide Festival a two-year licence for a Floating Palais event on the pontoon – but that approval only applies to the festival season.

The Adelaide Park Lands Authority will consider the festival’s request to keep the pontoon on the river in off-season periods next week.

Brookman said the Festival was committed to improving the visual look of the pontoon “and have plans ready and waiting to go”. 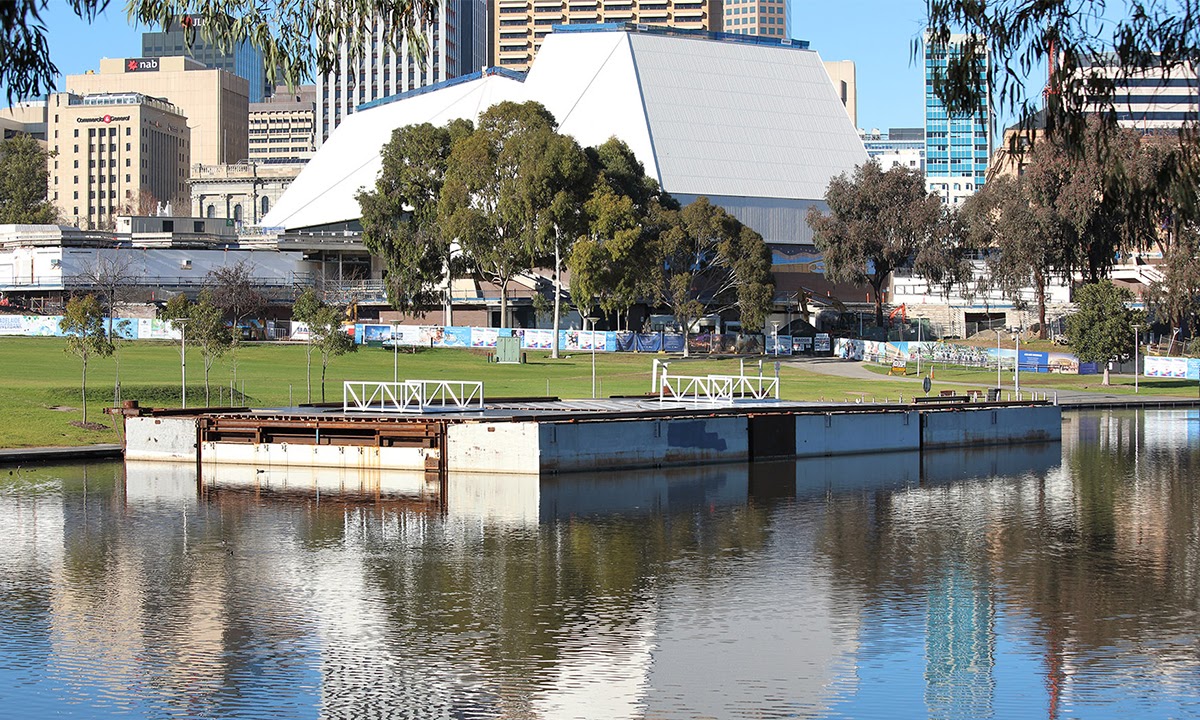 The concrete and steel structure has been described as an “eyesore”. Photo: Tony Lewis/InDaily

“But clearly we would not proceed if [the city] council did not give permission for the pontoon to remain in the water,” he said.

“We have always stated that we would cover the full cost of this.

“There has never been any request to council or anyone else to pay for it.”

Riverbank Authority chair Andrew McEvoy wrote to Lord Mayor Martin Haese last month advising him that future floating “activations” outside festival season would “rely on the Adelaide Festival, [the City] Council and the State coordinating its (sic) efforts, including the undertaking to improve the visual amenity of the pontoon”.

But Riverbank Authority board member John Hanlon told InDaily it remained the responsibility of the Adelaide Festival to improve the look of the pontoon.

If the council allows the structure to remain where it is, Brookman said, visitors could expect activation to occur there two to three times each year, with the timing of such events “dependent on when approval comes through and the time that it would take to ‘deck and dress’ the pontoon (about 6 – 8 weeks)”.

A final decision on the pontoon will be considered by the city council in a fortnight.