Abraham, who finished a 15-year stint with Bevan on June 30, helped the ABC to a dominant position in the breakfast ratings over a long period.

However, the ABC’s talk rivals, FIVEaa’s breakfast team of David Penberthy and Will Goodings, have been closing the gap this year, coming within 0.6 percentage points in the previous survey.

In today’s GfK survey, which ran from April 23 to July 1, the ABC’s breakfast team not only held on to the top spot, but increased its lead, despite losing audience share. FIVEaa’s problem was that it lost an even bigger chunk of listeners, dropping 1.6 percentage points.

Where did the listeners go? Radio National and ABC Classic FM both gained share in breakfast, albeit from low bases, while Hit107 surged by a huge 2.3 points, and Triple M and Mix102.3 had solid gains. 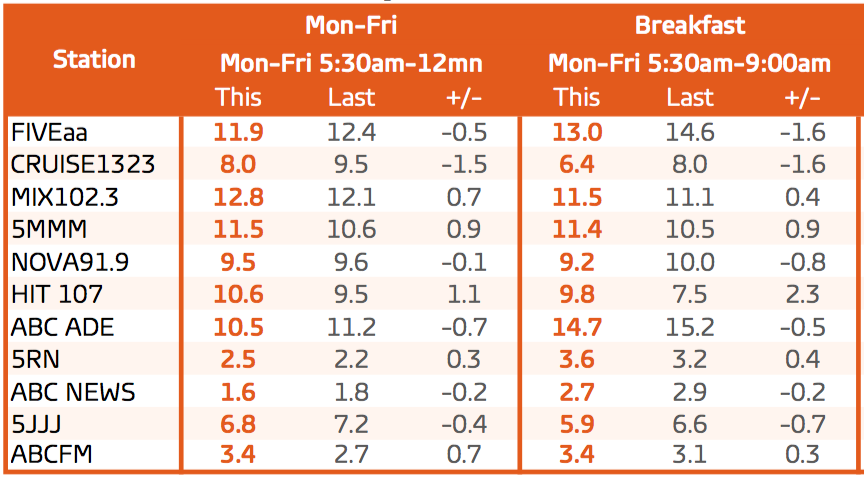 Abraham’s ratings farewell will be gratifying for him and his former ABC colleagues, but it’s anyone’s guess how the remainder of the ratings years will pan out.

The ABC is pondering significant changes to its AM line-up, covering both breakfast and mornings, which may transform the ratings dynamics.

Over at FIVEaa, the commercial station lost share in all shifts, apart from afternoons, to concede overall top spot to perennial winner Mix.

FIVEaa’s biggest losses came in breakfast and Drive. In mornings, veteran Leon Byner lost share but maintained his lead by the barest of margins over Mix.

Mix rules afternoons, while Nova had its only victory in the Drive shift.

Evenings are now dominated by FIVEaa, with Jon Blake looking after the 7-8pm slot and Jeremy Cordeaux taking listeners through to midnight. The ABC’s Peter Goers, a previous leader in the shift, remains in a distant second place.

Triple M and Hit 107 both had strong surveys, particularly in breakfast.

Hit is now the leading youth music station in Adelaide, overtaking Nova, thanks to a large degree to the former’s breakfast program surging past Nova.

Overall, Mix has taken top spot, FIVEaa moves back into second, followed by Triple M, which has leap-frogged ABC Radio Adelaide. The remainder of the leader board is Hit followed by Nova, Cruise and Triple J. Cruise has faded after a strong start to the year.

The demographic figures tell the story, particularly for the talk stations. FIVEaa lost significant ground among people aged over 65 – its strongest demographic – while the ABC lost its lead in the 55-64 age group to Mix.

In the battle for supremacy in sport, FIVEaa’s Drive sports programs were neck-and-neck with Triple M – only 0.1 separates the two, with FIVEaa maintaining the bragging rights. 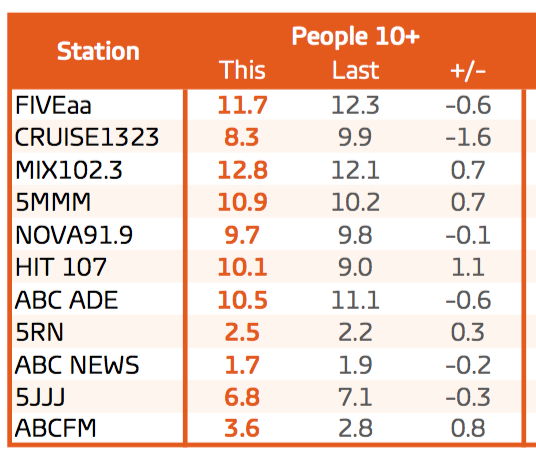