Peak body RecFish SA began lobbying for an artificial reef in 2013 before the Weatherill Government made it a 2014 election pledge at a time when it faced scrutiny over its marine parks plan.

Construction of the reef, 7km south of Ardrossan and 1km offshore, is only a few kilometres north of several popular Yorke Peninsula holiday spots including Black Point and Port Vincent.

It is also in an area where stocks of iconic species such as King George whiting and snapper have been seriously depleted in recent years through the long-line practices of commercial fisheries and, to a lesser extent, recreational fishing.

Work began this week with the first of 60 one-tonne concrete reef structures and more than 800 tonnes of limestone being sunk at the site. About 7 million native angasi baby oysters will then be planted on the reef to further attract fish and help revive the almost extinct wild oyster species.

RecFish SA executive officer Danny Simpson said it was satisfying to see a project the organisation had lobbied for reach the construction stage.

He said it had been an excellent decision to evolve the project from a strictly artificial reef to include the native oysters.

“We’re very confident that this is going to be of great benefit to recreational fishing,” Simpson said.

“The technical organisations involved in the design and deployment of the reef are very skilled and where they’ve done these things before it’s proven to be tremendous for boosting fish stocks and benefitting rec fishing.

“We know that many fish stocks are under pressure and if the reef contributes to improving those stocks then it is doing a fantastic job.”

The original reef was to be 4ha in size but additional funding from the Federal Government, The Nature Conservancy, Yorke Peninsula Council and the University of Adelaide will allow it to be extended to 20ha over the next few years, making it the largest shellfish restoration project outside of the United States.

The first 4ha of the project is being delivered by the Department of Primary Industries and Regions PIRSA and is expected to be opened to recreational anglers before the end of the year.

Diving will be allowed on the reef but the taking of oysters prohibited. The 4ha reef will be closed to commercial fishing permanently, but the fishing rules for the remainder of the 20ha reef are yet to be determined.

Simpson said it was hoped the reef would become a breeding ground to help improve the stocks of many species including garfish, squid and blue swimmer crabs, not just King George whiting and snapper.

“People will launch more boats, buy more bait and spend more time in the accommodation, and that’s a terrific thing.

“This reef is the starting point for the restoration of fish stocks in that area but let’s not forget that there was a massive area of the gulf that had oyster reefs on them before European settlement almost 200 years ago.

“Restoring the reefs can only mean more fish but there is a long way to go to get it to what we might consider to be healthy fish stocks.”

She said it was expected to take about two years for the reef to be colonised to the point where additional fish production was noticeable. 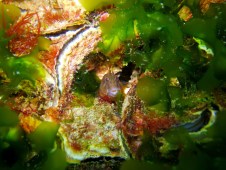 Restored SA reef seeks to turn the tide for oysters

“It’s a huge win and it’s a proactive way of enhancing fishing opportunities in a really sustainable way and bringing back the habitat that previously supported all those species,” Reinhold said.

“We expect there is going to be a great deal of benefit to the recreational fishing community purposes and we expect to see local economic growth as a result of this.

“It’s really putting a light on South Australia and the Yorke Peninsula region and it’s going to be a real asset to everybody in that area as well as people who want to visit.”