A financial assessment of the $5.5 million project by accounting firm BRM Holdich, presented to the council last night, finds an “extreme” risk that “the budget for the project is insufficient to deliver on stakeholder expectations”.

“Despite … mitigation strategies the residual risk of failure to meet stakeholder expectations for the project remains rated as an ‘extreme’ risk,” the report says.

The council is required to consider a report into prudential issues for any project over $4 million in value.

The other “extreme” risk identified in the report is that of adverse media coverage.

“The risk of adverse media in relation to the project will actually be ‘almost certain’,” it says.

On top of these two “extreme” risks, there were 31 “high” risks, 33 “moderate” risks and 12 “low” risks associated with the project.

These risks remained, even after mitigation measures were taken into account.

The report concludes that: “Given the nature of the project and the multiple stakeholder interests, the residual … risk for this project is higher than most capital works of this nature”. 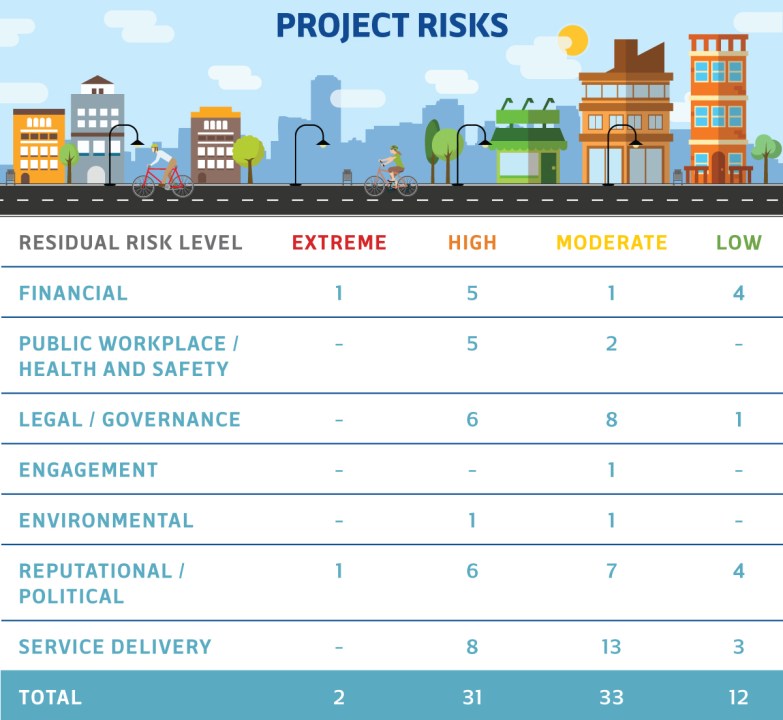 A reproduction of a table in the BRM Holdich prudential report, showing the ‘residual risks’ that remain after the application of ‘risk controls’ on the project. Image: Leah Zahorujko / InDaily

InDaily asked the council’s administration whether there would be any extra funding for the project to mitigate the risks.

Director of operations Beth Davidson-Park responded that the council was “actively managing all of the risks that have been identified” but the project would be delivered within budget.

“Together with the State Government, council continues to work within the identified budget for the project,” she told InDaily.

“We are finalising the design for the first stage between North Terrace and Pirie Street, with construction due to begin later this year.

“As the prudential report shows, council is actively managing all of the risks that have been identified.”

In addition to the risks of the project, the report assesses it’s economic impact.

It estimates that the project will inject almost $13 million into the South Australian economy through “economic multiplier” effects – and create 39 jobs.

In February, a consultation report found that businesses, residents and design professionals overwhelmingly rejected the council’s plans to demolish and redevelop the existing section of the Frome Street bikeway to allow for two driving lanes along the length of Frome Street – but they endorsed extending the bikeway.

The BRM Holdich report says that the February consultation demonstrated: “reinstating four lanes of traffic and reducing access to parking in peak hours on the section from Wakefield Street to Pirie Street is unlikely to be universally supported”.

It goes on to say that “while consultation on the project is still in the early stages, given the history of the Frome Street section of the bikeway, managing community expectations is a key risk of the project.”

“However, the engagement plan that has been created is robust, and provided it is followed, the impacted community will have a number of opportunities to influence and contribute to the outcomes of the project”.

One of the “high” risks noted in the report is “changes in scope” for the project.

Since its construction in 2014, the council has moved to demolish and replace the bikeway; it then revoked that decision in favour of a “compromise” deal where only the northern half of the existing cycling corridor would be redeveloped; it then found that the entire bikeway might be replaced after all (with councillors retaining diametrically opposite views on what they had actually ended up voting for).

Councillors hoped the most recent decision, in March, would end the controversy.

A spokesperson for Transport Minister Stephen Mullighan said both the State Government and the council’s contributions remained capped at $6 million.