In a senate inquiry hearing last night, DCNS boss Brent Clark backed away from his predecessor Sean Costello’s assertion that “over 90 per cent” of the $50 billion submarine build – part of a broader $89 billion defence spend – would take place in Australia, while declaring the company’s position was that local shipbuilder ASC would have no role in the project.

Under questioning from Labor senator Kim Carr, Clark spoke of a “gentlemen’s agreement” he had with ASC chief Stuart Whiley “to make sure we’re not taking anyone out of his organisation with regards to sustainment” of the existing Collins Class fleet.

But he confirmed DCNS, the French company chosen through a high-profile Competitive Evaluation Process, had advertised for a range of positions, including “procurement people” and “design engineers to transfer to France”.

Carr asked Clark: “Is it your intention to actually act as the builder, rather than just as the designer of the vessels?”

Carr: “So will ASC actually be involved as builders?”

Carr: “So what role will they play in the Future Submarine program?”

Clark: “Quite simply, from our perspective, ASC will be consumed by DCNS.”

Defence industry insiders have been abuzz with speculation about ASC’s future, with the company to be split into component parts to deliver various shipbuilding projects and maintain the existing Collins Class fleet.

“DCNS Australia today has around 30 personnel…this will ramp up to 300 to 500 in 2019-20 and 2000 direct employees from 2021, the scheduled start date for production of the first submarine in Adelaide,” the stakeholder update read, according to a translation.

It’s a far cry from the glossy brochure DCNS put out as part of its bid for the Future Submarines design contract, which broke down “the roadmap to 2900 jobs”, of which the French company would occupy just 100 and ASC would account for 1700. 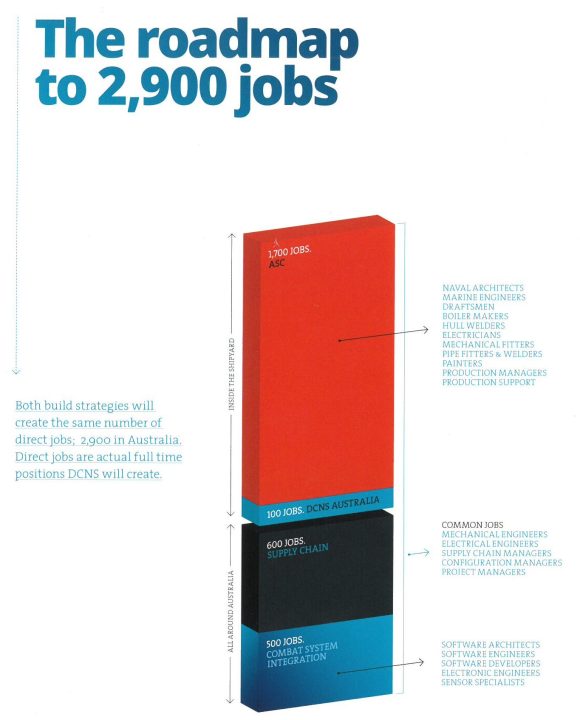 An excerpt from a previous DCNS brochure, detailing the planned role for ASC in the subs build.

It suggests ASC’s future role will be limited to maintaining the Collins fleet, which de Baillencourt’s briefing points out “will progressively be based in Perth”.

“As Collins leaves we will take control of the maintenance shipyard to upgrade the infrastructure,” she said.

The briefing also spruiked the number of French jobs the project would create, with opportunities for “250 major suppliers and about 40 component manufacturers”.

“It is in this cohort that French companies will essentially contribute,” it read.

“In the context of the [Future Subs] project DCNS is creating between 300 to 500 direct jobs in France and roughly 1000 indirect or related ones.”

“The architect is building the sub… not an Australian builder,” he said.

“The big question that raises is where does that leave us in terms of genuine Australian capability at the end of the journey?

“Will we retain the smarts and the intellectual property and ability to build submarines? Will it be a French government-owned company or an Australian company?”

SA senator Nick Xenophon, who was on the committee, said the evidence was “damning”, arguing “1400 SA jobs are slated to be shipped to WA after the commencement of a Future Submarine build in 2023-24”.

“It will cost Australia and SA in particular billions of dollars and over 1400 jobs,” he said in a statement.

“Let’s hope it doesn’t turn into an IKEA project, where all we do is bolt together a bunch of components that have been shipped to Australia from overseas.”

Xenophon demanded the Federal Government “has to be completely open with its long-term plan”, warning: “Instead of a jobs bonanza, the Future Submarine program may actually result in these jobs being lost for SA.”

But SA’s Defence Teaming Centre chief Margot Forster said Clark’s comments about the future of the naval shipbuilding industry were “logical”, and declared the political focus on a 90 per cent local build “over-simplistic”.

“I think we need to shift the conversation away from hammering on about the 90 per cent,” she said.

“It’s naive to believe we’d reach a 90 per cent Australian workforce on submarine one, because we need to plan how to do this.”

She said the debate should shift to a more “sophisticated” one around “what is sovereign capability”.

“We need to ensure that the Federal Government requires DCNS to provide us with a transparent plan around how and when the knowledge and skills to build the Future Submarines is transferred to Australia,” she said.

“We’ve got to ensure we have the workforce we need to sustain service capability, at the same time as we build the Australian skills capability to work on Future Submarines.

“I wouldn’t want DCNS to be taking the workforce away from Collins Class submarines because that’s an asset Australia can’t afford to compromise.”

Clark told last night’s hearing DCNS “will not impact on Collins sustainment in any way, shape or form”.

But Carr noted: “Frankly, I’m a bit surprised that ASC has no role at all in the building of the future submarines.”

Late today, ASC responded with a statement that appeared to contradict Clark’s assertions about its role.

“ASC has an enduring and critical role in growing and supporting Australia’s current and future submarine capabilities and looks forward to working with prime contractors DCNS and Lockheed Martin, as well as the Commonwealth Government, in this truly national endeavour.

“ASC anticipates growing its workforce significantly in coming years as it maintains the Collins Class submarine fleet as well as meets increased demand for Future Submarine capability in Australia.”

It said its maintenance of Collins Class submarines “will be delivered through the In-Service Support Contract, while current and future support for the Future Submarine program will be delivered under appropriate commercial agreements”.

De Baillencourt’s online briefing notes DCNS is “mapping the skills that exist in Australia which may address our needs”, saying the company has identified “3000 businesses so far”.

“We are assessing each one to ensure they have the capability to conduct the required work,” it read.