One claims the farm’s entire stock is at risk of being killed while the other argues there is no good evidence the port will pose a threat.

“Should the development proceed, the management of large bulk carriers … in a shallow coastal embayment will cause unacceptably high sediment loads and risk the introduction of exotic and/or harmful organisms to the Smith Bay ecosystem.

The abalone farm is about 500 metres away from the proposed development.

McShane, who was commissioned by Yumbah Aquaculture to write the report, is the former chief research officer at Monash University’s Monash Sustainability Institute and former professor of marine sciences at Australian Maritime College.

But another international marine biology consultant and principal scientist at Science to Manage Uncertainty, Anthony Cheshire, told InDaily it was “far too early to make any predictions about what will happen as a result of this development”.

KIPT confirmed that Cheshire has been commissioned as an independent consultant to the company.

In a statement to InDaily responding to McShane’s report, Cheshire said that while there was a “potential for mobilisation of sediments during dredging”, there had “not yet been any published data on sediment particle sizes for this location”.

“It is necessary to confront belief and opinion with data and evidence and thereby ensure that we have the best chance of getting it right,” he said.

Cheshire’s statement says: “KIPT will use data on the sediment particle sizes and conformation along with data on current and tidal flows … to determine how much sediment will be mobilised and where that sediment will go.”

“This will then provide a basis for assessing the likely risks from the development as well as the utility of the suite of available mitigation strategies.

“… to ensure that we get the best possible outcomes for all parties (including the people of Kangaroo Island and the state of South Australia) we need factual information that can be used to support a meaningful assessment of the proposal.”

KIPT managing director John Sergeant told InDaily his company would not propose a port be developed in Smith Bay if it believed such a facility would pose a threat to the local ecology.

“We wouldn’t be contemplating building it if we felt it was going to increase turbidity [cloudiness, i.e. the presence of sediment] in the water, and we wouldn’t be allowed to,” he said.

“Nothing that we’re contemplating doing would have anything like the effect that a storm would have.”

He said that the company would use sediment curtains in the water to mitigate any risk to the local ecology, and “if any sediment did escape it would be detected long before [it reached the abalone farm’s seawater intake pipes]”.

Sergeant said the presence of sediment in the waters of Smith Bay was much higher during storms than it ever would be as a result of KIPT’s planned dredging of part of the bay (to allow large bulk carriers to berth there). 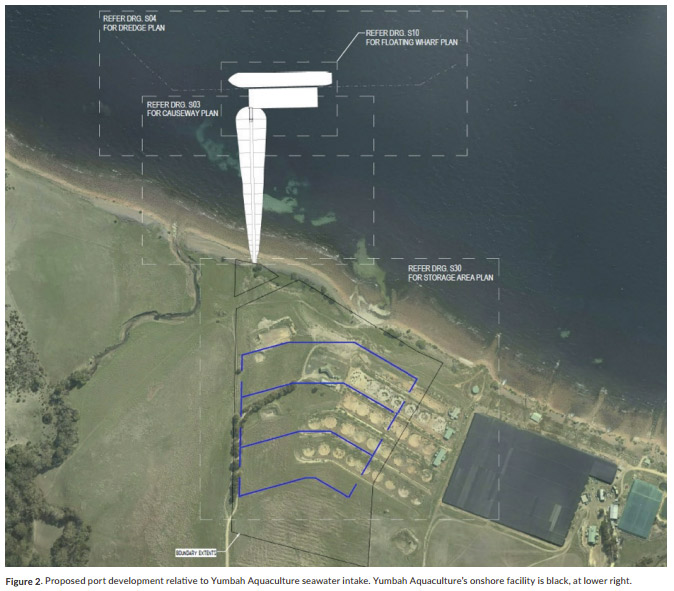 A satellite image with a diagram of the proposed port at Smith Bay from McShane’s report.

InDaily contacted Professor Sean Connell of the Department of Biological Sciences at the University of Adelaide.

Connell declined to comment on the particulars of the case except to say that “the risks [to the abalone farm] are apparent – but the data aren’t”.

The farm was established in 1995. Its produce is sold to domestic and foreign export markets.

Cheshire, a specialist member of the DAC, said he was not advising the body on KIPT’s development as a result of his engagement with the company.

A spokesperson for the Department of Planning, Transport and Infrastructure told InDaily yesterday: “The DAC is in the process of reviewing the proposal, taking into account a range of issues and having received advice from State Government agencies, KI Council and the Commonwealth Department of Environment and Energy, and having visited and heard from both KIPT and Yumbah Abalone.”

“The role of DAC is to set the level of environmental assessment … along with the guidelines – issues to be addressed – by KIPT, who will then need to prepare the necessary, more detailed documentation, which once received will be formally released for public, Council and agency consultation.

“At this point in time the DAC is still actively considering this matter for the purposes of setting the level of assessment and guidelines that KIPT, as the proponent, must address.”