The plan will include spending $1.3 billion to upgrade the shipyard at Osborne and the plant at Henderson in Western Australia, with the South Australian facility getting the lion’s share.

Speaking in Adelaide today, Prime Minister Malcolm Turnbull rejected as “nonsense” any idea that the Federal Government had dudded South Australia on infrastructure in last week’s budget, pointing to today’s plan as evidence of his Government’s support for the state.

“This is the largest single Commonwealth investment in any single state,” he told ABC Radio Adelaide.

He said the plan would ensure thousands of jobs in high-tech industry, including 5000 direct shipbuilding jobs and 10,000 in sustainment.

The program, described in the plan as “the greatest regeneration of our country’s naval capability since the Second World War”, will produce 12 submarines, nine frigates and 12 offshore patrol vessels, as well as 19 Pacific patrol boats to be given to neighbouring countries.

“This is a continuous shipbuilding commitment, not just for today or tomorrow but generations to come,” Turnbull told a press conference at Osborne.

“This is truly nation-building, a great national enterprise and it brings with it that enormous employment boost. It is unashamedly nationalistic.

“My government believes that it is not only in the interests of securing the capabilities that our defence forces but also it secures our economic future, our industrial future.”

Despite the good news, Premier Jay Weatherill again slammed the Federal Government for its infrastructure spending in South Australia, pointing out that the state had to fight for the shipbuilding program to be based here.

Work on a $535 million infrastructure build at Osborne South would begin in the second half of 2017, with an upgrade of a similar magnitude also flagged for the southern part of the facility.

Last week the state and federal governments revealed that the South Australian-owned Osborne facility, known as Techport, would be bought by the Commonwealth for $230 million – a timely boost for the state coffers ahead of next month’s budget.

The plan released today says that ASC will continue its role in completing the air warfare destroyer project at Osborne, and would sustain the Collins Class submarines. A new company, Australian Naval Infrastructure Pty Ltd, now owns the previous ASC infrastructure on behalf of the Commonwealth, and will oversee the development of new works at Osborne.

One of the key issues identified by the plan is raising and training a skilled workforce which will need to double or triple to 5200 by 2026.

The government will establish a $25 million naval shipbuilding college in Adelaide to train workers.

The plan says that South Australia alone will need an extra 3600 workers in the first half of the 2020s, with a strong concentration on the skilled trades.

“From 2022, workforce demand in South Australia will increase rapidly to meet the start of the future frigate and future submarine projects,” the plan says. “Demand for construction workers will reach a peak of around 5200 in 2026. As the Government’s strategy for maximising Australian industry involvement in the continuous build programs is implemented, the indirect workforce is also expected to grow significantly.”

It says that foreign and interstate workers will be needed, with the number of skilled workers from international shipyards to decline over time as the Australian workforce gains more skills and experience. The plan flags a “public communications strategy” to encourage interstate workers to relocate to South Australia.

“Selected shipbuilders are expected to bring into the Australian shipyards workers from their home companies who are familiar with their specific production techniques and processes,” the plan says. “These workers are likely to fill middle management and supervisory roles and will be essential to the process of knowledge transfer to the Australian naval shipbuilding industry.”

However, Pyne sought to play down that part of the plan today, saying: “We will not be bringing foreign workers in to build the ships or submarines.”

He said a “miniscule” number of trainers will be brought in to “transfer their intellectual property to our workforce” as part of the submarine project involving French contractor DCNS. 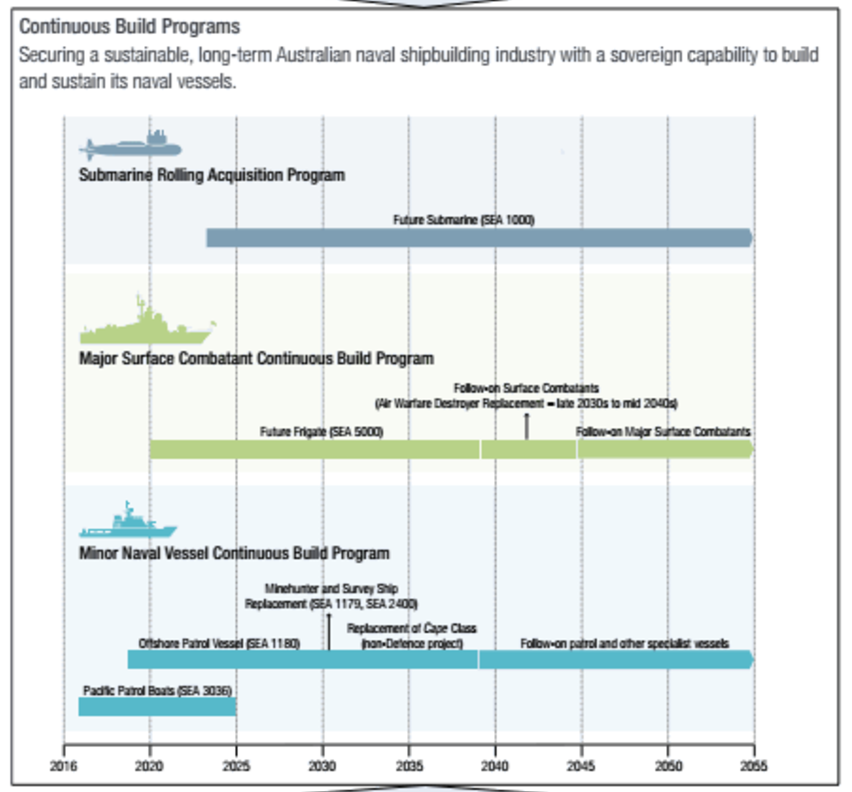 Detail from the plan.

“Our investment will ensure protection of our maritime borders, secure our immediate northern approaches and enable us to project force in the maritime environment,” Turnbull and Pyne said in the foreword to the plan.

“We are a maritime nation and our security depends on a modern and effective navy.”

Turnbull, Pyne and Defence Minister Marise Payne launched the plan at Osborne this morning, but immediately received a political whack from the State Government.

Premier Jay Weatherill said South Australia had to fight for the submarines project, which he insisted previous Prime Minister Tony Abbott wanted to send to Japan.

“I notice that Malcolm Turnbull is in town – once again lecturing people, patting us on the head and telling us that we should be grateful for the crumbs that have fallen from the Commonwealth table,” he said.

Weatherill said just because the government was spending money on defence projects did not mean his state should not fight for better road and rail funding.

The State Government had “fought” for the defence build in South Australia.

The state Defence Industries Minister, Martin Hamilton-Smith, echoed the Premier’s sentiments saying that while today was a “landmark” in the progress towards a continuing shipbuilding program, there were other landmarks on the way.

“A Prime Minister who wanted to buy submarines built in Japan; federal Liberal MPs in South Australia saying that the 500 maintenance jobs coming from an overseas build wasn’t a bad result; Minister Pyne saying as recently as March last year that Offshore Patrol Vessels were ‘never promised to Adelaide and it would be a disaster because if it was won by Adelaide at Osborne we couldn’t then start building the Future Frigates’,” Hamilton-Smith said in a statement.

“Since mid-2015 the State Government has been unwavering in its push for the principle that Australian naval ships should be built in Australia by Australian workers. Eventually, a new Prime Minister agreed. Eventually, a local Liberal MP agreed we could handle the workload.

“This government’s principled stand will deliver, as the Prime Minister confirmed today, 5200 direct jobs and another 10,000 indirect jobs.

“In early 2015 we were looking at some maintenance work on a Japanese project. We stood tall with unions, and with the defence industry and today we have an industry that will endure for decades and decades – Australian ships, built in Australia for Australia’s defence.

Independent Senator Nick Xenophon was underwhelmed by the plan.

“This plan is largely a rehash of pre-existing information in the public domain and its lack of detail and commitment is a shocker.”

He said the plan failed to commit to the Federal Government’s previous definition of a local build.

“By failing to commit to the previous figure – set out by Minister Pyne – of a 90 per cent local build for the $50 billion Future Subs program, and instead talking vaguely of a 60 per cent minimum figure, SA could be missing out on up to $15 billion worth of local economic activity and jobs,” he said.

“Disturbingly, the plan does not detail the extent of Australian industry participation, nor does it set out a detailed schedule of the build program – something the US Navy does.”

Xenophon said the plan failed to deal with the so-called “valley of death”.

“The plan does not specify how the ‘valley’, that we are in right now, will be filled between now and the start of the future frigates in 2020, assuming they’re on time.

“Apart from two offshore patrol vessels being built here in SA after the AWDs – it seems there is no plan for that two year gap to deal with the hundreds of direct jobs that will be lost – and thousands in the flow-on impact.”

AT A GLANCE: THE FEDERAL GOVERNMENT’S SHIPBUILDING PLAN

* $89 billion to be spent on building 12 submarines, nine frigates and 12 offshore patrol vessels for the Australian navy as well as 19 Pacific patrol boats to be given to neighbouring countries.

* It includes $1.3 billion to upgrade the Osborne Naval Shipyard in Adelaide and the plant at Henderson in Western Australia.

* The government will also establish a $25 million naval shipbuilding college in Adelaide to train workers.

* Employment in the defence supply chain and allied industries expected to create another 10,000 jobs.

* The federal government has committed to using Australian workers and Australian suppliers where possible.

* The government won’t put a figure on local procurement, but says anything above 60 per cent ensures the vessels are locally built.