A report on consultation, published by the State Government today, shows a majority of people who attended a community open day and responded to an online survey wanted the focus of the North Terrace site to be on green, open space which is accessible for all.

Respondents also wanted the heritage buildings on the site to be retained and adapted for community use such as an art gallery, concert hall or museum, adding weight to the Government’s considerations about whether the site should include a new home and performance venue for the Adelaide Symphony Orchestra and/or a new contemporary art gallery.

However, a “significant” proportion of respondents were opposed to the Government’s plans to allow new buildings, including residential development.

The report, by Kath Moore and Associates, said “the most predominant view raised was the need to retain as much open, green space as possible and ensure it was available to all members of the public”.

“A significant number of respondents strongly suggested no further building be undertaken on the site and the focus be on developing the open area to effectively link with the Botanic Gardens,” the report says.

In particular, many respondents were opposed to residential development – a key part of the Government’s plans for the site.

“A significant number of respondents reiterated their belief that these are public areas and this is part of the Park Lands so there should be no accommodation as part of the redevelopment. Statements included that there is already enough residential accommodation in the city and this would simply add to the amount already commercially developed.”

The consultation included about 250 people who attended the open day and 150 people who completed a survey on the project.

A private consortium of Commercial & General and John Holland has been selected by the Government as the preferred proponent to develop the site.

Under Government plans released last year, more than 70 per cent of the site would be accessible to the public, but it would also include more than 1000 apartments, as well as tourism and commercial developments and an “innovation” quarter housing research facilities. More than two hectares of the site will be given to the Botanic Garden.

As InDaily reported last year, the pitch to the Government from the private consortium included a Marriott hotel on the site, although negotiations about its inclusion are ongoing. That pitch also included the concept of an underground concert hall and an art gallery.

The Art Gallery of SA is working with the Government on the feasibility of a radical new institution, dubbed Adelaide Contemporary. 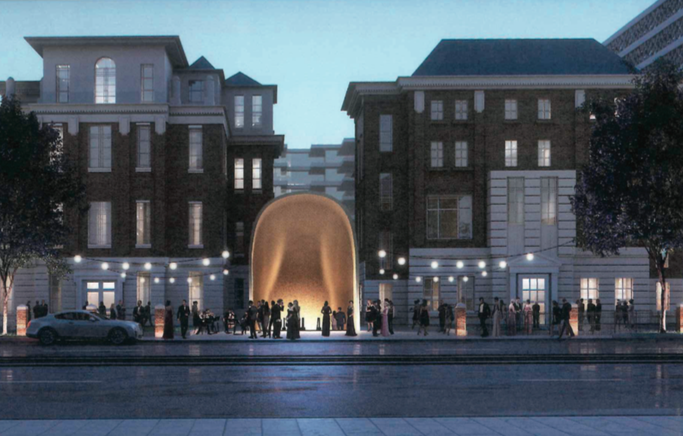 Unreleased plans for the old RAH site show concert goers outside the entrance to an underground concert hall.

Housing and Urban Development Minister Stephen Mullighan said today that the consultation showed there was support for many elements of the Government’s vision for the seven-hectare site.

He acknowledged the opposition to residential development, but said the redevelopment’s success depended on a “full mix” of uses.

“While there were concerns about the residential aspect, without a full mix of uses the site won’t support so many people on site and deliver benefits to the East End,” he said in a statement.

“With a project of this size and location, a mixed reaction from the public is to be expected.”

He promised that the feedback would be incorporated into the Government’s consideration of its plans for the site.

“The State Government has committed to consult extensively with the community throughout the master planning process for this important CBD site, while we also continue negotiations with the preferred developer, John Holland and Commercial & General.”

There will be more opportunities for the community to provide feedback, he said.