The second GfK survey of the year shows a continuing volatility in Adelaide’s listening habits in relation to the smaller stations.

In the first survey of 2017, it was youth station Triple J that put on a huge surge. In this survey, which covers February 12 to April 8, Triple J has fallen back to previous levels, while Cruise has raced up the charts, from eighth place to fifth. This puts it ahead of Southern Cross Austereo’s two Adelaide stations – Triple M and hit107 – and within striking distance of Nova91.9.

Cruise, a modern rarity as an AM station with a music format, had solid gains across most shifts. Surprisingly, it has moved into second spot on weekends, behind only ABC Radio Adelaide, thanks to strong growth among listeners aged 65 and over and in the 55-64 age bracket. 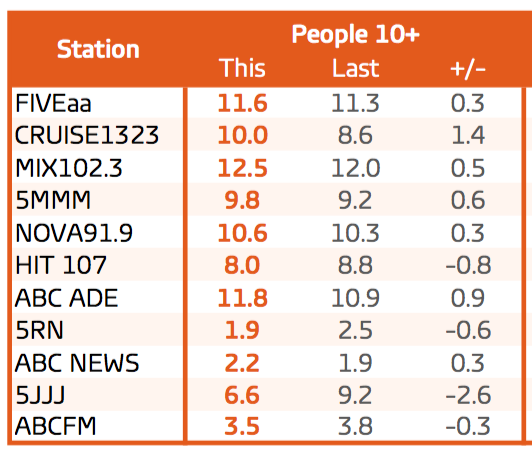 In the afternoon shift, Cruise is in third spot behind Mix102.3 and Triple M, easily outrating the likes of FIVEaa, ABC Radio Adelaide, Nova and hit.

In the closely watched breakfast shift, ABC Radio Adelaide’s Matthew Abraham and David Bevan are holding on to their lead, despite losing 0.6 percentage points. While 15.7 percentage points is well off their peak, they still have the highest audience share of any show in Adelaide.

Their nearest rivals, FIVEaa’s David Penberthy and Will Goodings, closed the gap, but also lost share. 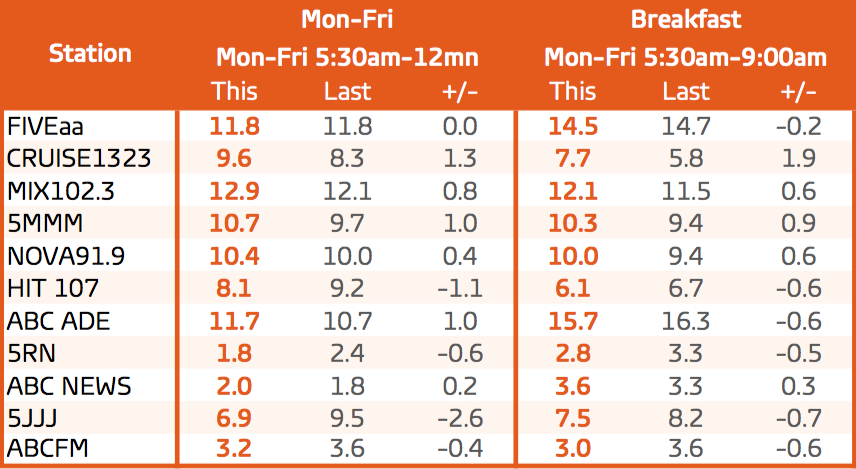 GfK ratings survey 2 for all Monday to Friday shifts, and Breakfast.

ABC Radio Adelaide had gains across all other shifts, with Peter Goers again ruling Evenings with a huge 4.0 percentage point surge, to take back the lead from FIVEaa.

Comedian Jon Blake returned to the line-up during this survey period, contributing to Breakfast – which lost share – but also hosting a 7-8pm evening show, with Jeremy Cordeaux following him at 8pm. In the 7pm to midnight shift, FIVEaa put on 1.3 percentage points – the second biggest increase in share in this shift behind Goers – but lost the overall lead.

The talk station’s Drive team put on share to maintain their lead over sports rivals Triple M, which bounced back after a poor first survey to close the gap. Nova and Mix lead the pack in the shift.

Evergreen Leon Byner had a strong survey in mornings for FIVEaa but, despite putting on share, lost his lead to Mix.

In afternoons, Jade Robran lost share, putting FIVEaa at the bottom of the pack, only leading the minor ABC stations (noting that Robran is on air from 12-3pm, while the ratings measure midday to 4pm).

New ABC Radio Adelaide Drive presenter Jules Schiller hasn’t had a noticeable impact on the ratings, with his focus on light news and entertainment.

His ratings share moved from 7.6 to 7.7, but ABC local radio remains way back in eighth place in the shift, well beaten even by the likes of Cruise and Triple J.