Community Visitor Maurice Corcoran told InDaily today that his program, which advocates for people with mental illness and disability in South Australia, had repeatedly warned SA Health mental health executives about the treatment of patients at the Makk and McLeay facility in Oakden.

The facility, which treats older people with dementia and severe mental illness, will be closed after the State Government received a scathing report from the Chief Psychiatrist, Aaron Groves, which found that patients had been routinely mistreated in an environment inappropriate for their care.

Mental Health Minister Leesa Vlahos has repeatedly blamed a “culture of cover-up” among staff at the facility for the Government’s failure to act before now, but Corcoran insists that he first raised issues about the facility with South Australian health officials in 2011.

Corcoran told InDaily that concerns about the treatment of patients and the quality of care and facilities at Oakden had been repeatedly raised with the mental health executive of the Northern Adelaide Local Health Network (NAHLN) – the part of SA Health that administers the facility.

He said his dealings with NAHLN had been “frustrating” and he believed his concerns had been ignored.

“We have referred concerns to senior doctors in NAHLN mental health services and have been doing that for a number of years,” he said.

“We have been doing monthly visits there since July 2011 and we have been consistently flagging issues of concern around falls, injuries, etc.

“We have certainly provided copies of these reports to the Chief Psychiatrist over the past 12 months.”

He said a broad-ranging, independent inquiry was now needed to examine the system-wide issues that led to the warnings signs about Oakden apparently being ignored until now.

The report released yesterday by Vlahos also indicates that the Government should have been aware of issues with the facility as long ago as 2001.

“Our experience of raising a whole range of issues with the NAHLN mental health executive has been very frustrating,” Corcoran said.

He said NAHLN “did nothing” as a result of his complaints.

“We have tried and tried over a long period of time to raise the flag on this,” he said.

InDaily has asked Vlahos for her response.

Earlier today, she repeated her claim that she had first become aware of specific concerns about the facility in December last year, particularly the concerns of the family of one patient, the late Bob Spriggs, who reported he had unexplained bruises and had been overdosed with medication.

However, Corcoran points out that his annual report, tabled in Parliament last September, raised strong concerns about Oakden.

That report said his office had “received concerns from three families regarding the treatment and care of their loved ones at Oakden. These have included reported frequent falls, observed bruising, medication errors; increased sleepiness, drowsiness, and reported decline of daily functioning.”

Vlahos told ABC Radio Adelaide’s breakfast program today that “as soon as I became aware of the concerns from the Spriggs family in December last year… I intervened and I’ve commissioned this independent report”.

When pressed about why the Government didn’t heed concerns going back many years, she blamed staff for hoodwinking Commonwealth accreditation systems. (The facility, while primarily a state-run mental health facility, has also been an accredited “nursing home”, which is administered by the Commonwealth.)

“We’ve met the accreditation standards and as recently as February 2016 we were re-accredited up until 2019,” she said.

“…what there seems to be is they’ll meet the standard then they go back to their lacklustre behaviour.

“We know there’s a culture of cover-up. There’s reference in the report that people would say ‘a boss on the floor’. So when they know they’re under scrutiny they would lift their game and as soon as that scrutiny went away they would go back to their bad practices.” 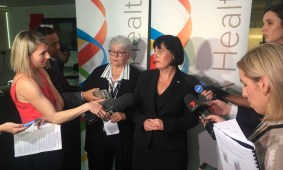 The Opposition called for Vlahos to be sacked.

Shadow health minister Stephen Wade said the minister had ignored repeated warnings about conditions at Oakden before ordering an investigation in March.

“Minister Vlahos has left elderly South Australians suffering from dementia in disgraceful circumstances despite being made clearly aware that the standard of care being provided at Oakden was not of an acceptable standard,” Wade said.

“It was not until the media reported concerns about the treatment of vulnerable people at Oakden did Minister Vlahos even bother to visit the facility.

“The conditions to which some of the most vulnerable, ageing South Australians were subjected to were nothing short of appalling.”

Both Premier Jay Weatherill and Health Minister Jack Snelling are on leave.

Vlahos said this morning she was not aware if Weatherill or Snelling had read the report.