When contacted by InDaily, Day initially said he had “no comment” on the High Court decision, but then conceded he was “naturally disappointed”.

Asked whether he was still involved with the Family First party, he said: “I’ll leave it at that.”

Day formally resigned as a senator for South Australia on November 1 last year to deal with the collapse of his Home Australia group of companies.

However, six days later the Senate referred his eligibility for election to the High Court on the grounds he may have benefited from the commonwealth through a lease arrangement relating to his Adelaide electoral office.

Under section 44 of the constitution, a member or senator can be disqualified where there is “any direct or indirect pecuniary interest in any agreement with the public service of the commonwealth”.

The court decided today that Day was incapable of sitting as a senator under that section because the financial benefit he stood to gain from the commonwealth paying rent constituted an “indirect pecuniary interest”.

That’s because rent was due to be paid into a bank account owned by Day.

The court found the vacancy should be filled by a “special count of the ballot papers” – rather than by a Family First choice, given he was invalidly elected – with a single judge to make further directions and orders.

The second candidate on the Family First ticket was Kenyan-born lawyer Lucy Gichuhi, who only received 152 first-preference votes.

Former Labor senator Anne McEwen, who lost her seat at the July 2016 federal election, is a party to the case, given it could open the door for her return to parliament.

Her lawyers argued it should not automatically assumed the next person on the Family First ticket should get the seat should Day be found to have been ineligible to run.

“(The court) must consider whether the presence of the ineligible candidate distorted the vote and if so, how best to address that distorting effect,” they submitted.

In a statement released today, McEwen said she was “considering the decision with my legal team”.

“We had advice to the contrary but I respect the court’s decision,” he told InDaily.

“Of course the matter is not yet finalised, as it now requires a further court process.”

He said the recount could see Gichuhi elected, but could also see the seat go to Labor or even One Nation. 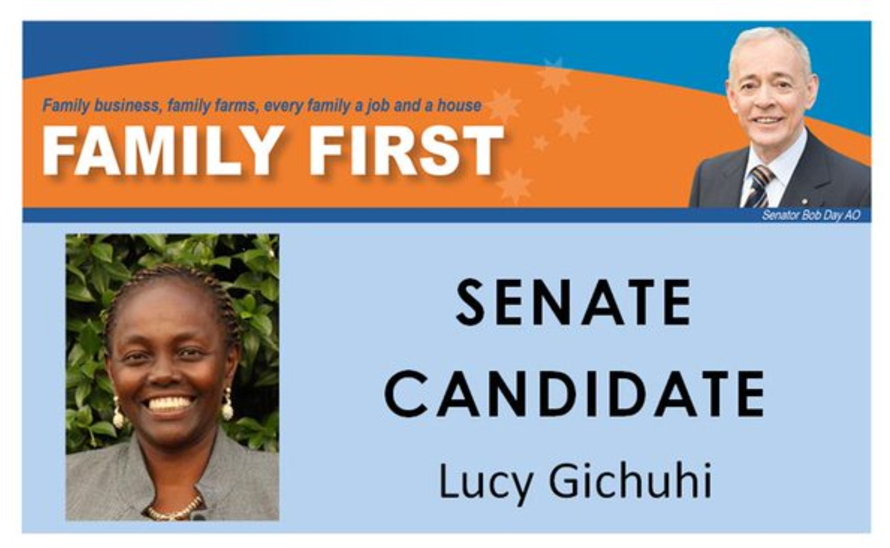 Gichuhi in her election material.

The decision also thwarts the senate ambitions of longtime Family First advisor Rikki Lambert and state MLC Robert Brokenshire, both of whom were considered frontrunners for a casual vacancy if Day was deemed to have been validly elected.

Brokenshire will continue to serve in state parliament, while Lambert has since moved to work with renegade Liberal-turned Australian Conservatives founder Cory Bernardi – a move Hood insists he made with his “blessing”.

“I’ve spoken to both [Lambert and Brokenshire] this morning,” Hood said.

“They’re obviously a little disappointed but they understand these things are out of their hands, and we continue on.”

Shadow attorney-general Mark Dreyfus said the government was to blame for the mess.

“The government was told this arrangement was improper as early as February 2014, when the Department of Finance warned then Special Minister of State Michael Ronaldson,” Dreyfus said.

The department said at the time it had “concerns about how such a transaction might be perceived”.

Finance Minister Mathias Cormann was alerted to the situation in December 2015, but he did nothing, Dreyfus said.

Day was a key crossbencher in negotiations with the government and the search for his replacement follows Peter Georgiou taking over from former One Nation senator Rod Culleton.

Culleton was found to have been ineligible due to an existing larceny conviction which was later overturned.