Berejiklian confirmed she would put her hand up to become Premier of New South Wales, and said she had asked Finance Minister Dominic Perrottet to be her Liberal party deputy.

Her announcement comes a day after Premier Mike Baird announced his shock resignation from politics, citing serious health challenges faced by his parents and sister.

A partyroom meeting is planned for Monday.

“I’m very, very heartened by the support I’ve received to date from colleagues in the party room, and of course we have a way to go,” Berejiklian told reporters in Sydney today.

“Nothing is assumed, I’m not assuming anything ahead of Monday morning’s meeting and in fact if colleagues feel they want to put their hands up, no hard feelings – it’s a democracy.”

But she said she believed herself to be the best candidate to be the next NSW premier.

Berejiklian said she had spoken to Constance, but would not comment on the discussion.

She paid tribute to Baird as an “outstanding premier” who had left the state in far better shape than he found it.

She said she was surprised by his decision to step down, but appreciated the reasons for it.

“It’s fair to say the coffee meeting I had with him yesterday morning wasn’t what I expected it to be, and I was taken aback by the news he gave me,” Berejiklian said. 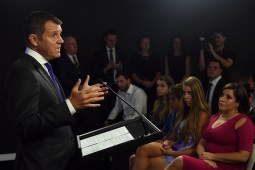 She said it will “be weird” not working alongside Baird.

Asked whether he had ever discussed handing the position onto her, Berejiklian said she dodged the topic.

“When he has chosen to raise it, I’ve actually avoided it. We’ve not ever had a conversation about that.”

The 46-year-old would become NSW’s second female premier if elected.

Elected to Sydney’s lower north shore seat of Willoughby in 2003, Berejiklian is an experienced politician who has overseen massive surpluses and a strong budget performance as state treasurer.

“I’m someone who works incredibly hard, I’m someone who appreciates what it’s like to face challenges in life and (that you) have to keep applying yourself to be the best you can be,” she said.