Treasury predicted in Monday’s Mid-Year Economic and Fiscal Outlook (MYEFO) that the deficit for this financial year (2016-17) will actually decrease slightly to $36.5 billion, which is $600 million better than the $37.1 billion expected in May.

Treasurer Morrison sounded upbeat during a press conference on Monday, saying the government was getting spending under control, although he admitted “there is more work to be done”.

The government is still projecting the budget will return to balance in 2020-21. Many experts see this as overly optimistic. 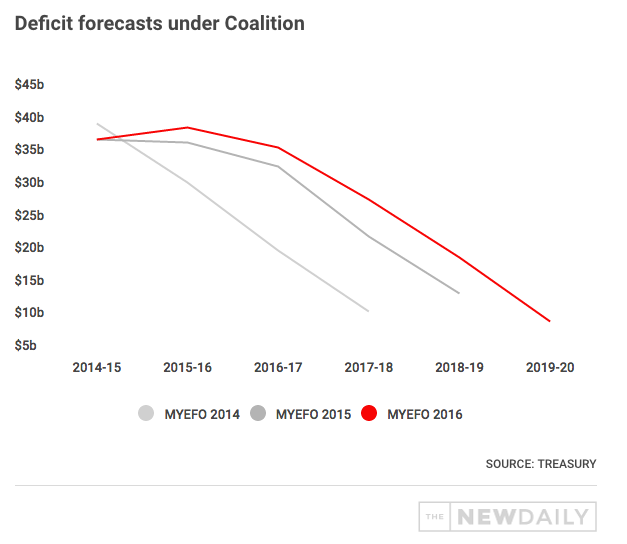 Despite the expected reduction to the deficit, the Coalition will preside over an increase in the national debt, according to MYEFO documents.

Net debt will peak at 19 per cent of GDP in 2018-19 and then decline over the medium term, according to MYEFO. 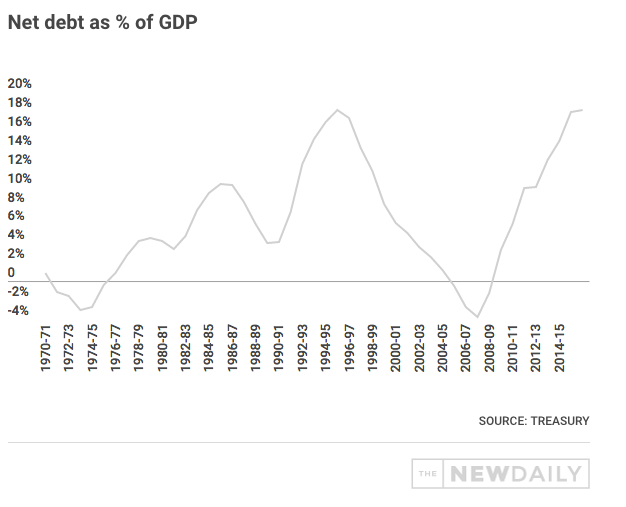 Revenue continues to be a problem. Despite this year’s rally in iron ore and coal prices, estimated tax receipts for this financial year are down by $3.7 billion since the budget.

“Some of the factors driving iron ore and coal prices are likely to be temporary and prices are widely expected to retrace some of their recent gains,” the report said.

Analysts will be eagerly waiting to see if the predictions placate the concerns of global ratings agencies, especially Standard & Poor’s, which has Australia on a “negative watch“.

MYEFO provides an update not just on the federal budget, but also on the state of the national economy since the budget was released in May.

GDP will grow by 2 per cent this financial year and 2.75 per cent the next, and the unemployment rate will stay unchanged at 5.5 per cent over the same period, the documents predicted.

Australia’s record-low wage growth will improve slightly, but remain “subdued”. The wage price index will close this financial year at 2.25 per cent, but rise to 2.5 per cent, the report predicted.

“With spare capacity in the labour market expected to persist, growth in household incomes and domestic prices are forecast to remain subdued.”

The government used the budget update to announce a welfare payment fraud crackdown, which it expected to save $2.1 billion over the next four financial years.

“From 1 January 2017, DHS will implement a package of initiatives to enhance the integrity of social welfare payments, including expanding and extending data matching activities with the Australia Taxation Office and improving engagement with welfare recipients to ensure that they understand and meet their obligations,” the government wrote in MYEFO.

MYEFO also confirmed the government will scrap the Green Army, a program introduced by former prime minister Tony Abbott. This should save $9.3 million this financial year, and $224.7 million over four years.

It will also stop family tax benefit part A end-of-year supplement for families earning more than $80,000 ($644 million over four years).

And it will cap funding for the Jobactive program for those over 25 ($329 million over four years).

A further $22 billion worth of savings have been legislated since the July election.

It will restoring funding for the Australian Renewable Energy Agency ($800 million over five years).

And it will delay changes to bulk-billing incentive payments for pathology and diagnostic imaging ($200 million over four years).