InDaily can reveal exclusively that the development – dubbed “The Magnet” – is planned to include a Marriott-branded, five-star, 180-room hotel, connected to a 1500-seat underground concert hall and rehearsal space for the Adelaide Symphony Orchestra.

The leaked document – co-branded with the Government logo and those of private-sector partners John Holland and Commercial & General – includes a broad range of details that were stripped from the Government announcement provided to the Murdoch press in late October.

The original  announcement focused on residential apartments, open space and a large hotel. A subsequent leak to The Advertiser suggested there would be a concert hall and a contemporary art gallery on the site, but today’s revelations go much further. A promotional brochure – leaked to the Opposition – shows much more detail, including some radical proposals.

While the Government has made it clear it is still considering whether to fund a new contemporary art gallery, the promotional document shows how close it came to announcing its location on the old RAH site, as well as the long called-for new concert hall for Adelaide.

The question now is why these elements – and many other details contained in the leaked document – were stripped from the publicly-released plan. The Opposition says the leak raises questions about divisions in cabinet over the project’s major public elements.

The brochure contains testimonials from a range of key players, including Paul Foskey, the executive vice-president and chief development officer Asia-Pacific for Marriott International.

Foskey is quoted as saying: “Marriott International Inc is excited at the prospect of bringing our flagship Marriott Hotels & Resorts brand to Adelaide. The elements are all in place in this bold and visionary plan for a wonderful international standard hotel that is very much in keeping with its beautiful surroundings in Adelaide.”

The hotel would have a driverless shuttle stop, and a direct connection to the concert hall.

Marriott Hotels confirmed that it was a project partner but its final involvement was subject to “further discussions” with the Government.

A spokesman for Foskey told InDaily: “Marriott International has been working closely with our partners Commercial & General and John Holland, who have recently been named by the State Government as the exclusive preferred proponent to reinvigorate the old Royal Adelaide Hospital precinct.

“A hotel is one component of the precinct. We are delighted to be involved. Subject to the outcome of further discussions with the state, we very much look forward to operating the hotel under our world-famous Marriott brand.” 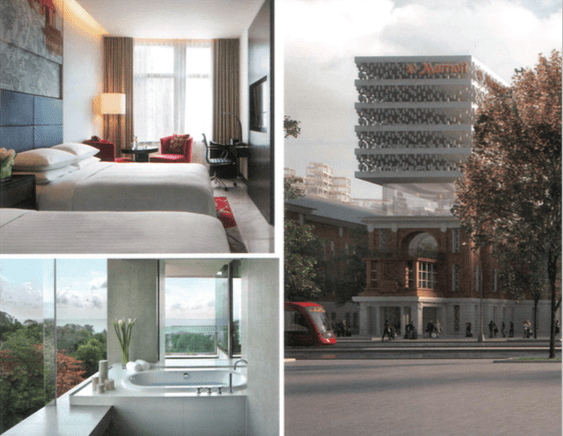 A Marriott-branded hotel, as pictured in the document.

ASO managing director Vincent Ciccarello is also quoted in the document: “A concert hall on this site… within a residential, hotel and innovation zone on the edge of the Botanic Gardens, enabling the movement of people through and between these many components of the precinct represents activation at its best. One result, I would expect, is the development of new audiences for the ASO.”

The concert hall, illustrated with a “signature entrance” from North Terrace between two heritage buildings, would be built by “re-using and expanding existing below-ground hospital spaces” to house a “world-class, multi-purpose concert hall”.

In addition to providing a “much needed and iconic new home and performance venue” for the ASO, it would also include a plenary space for conferences, and a banquet and function centre.

“Innovative flexible design will enable the space to be reconfigured for chamber concerts and recitals and other more intimate performances,” the document states.

The contemporary gallery is illustrated as a plain white box on land the Government announced would be returned to Botanic Gardens. However, InDaily understands that this is more of a placeholder image than a proposed design. The document says the Botanic Gardens administration would be re-housed on the site in a “green roofed” building. 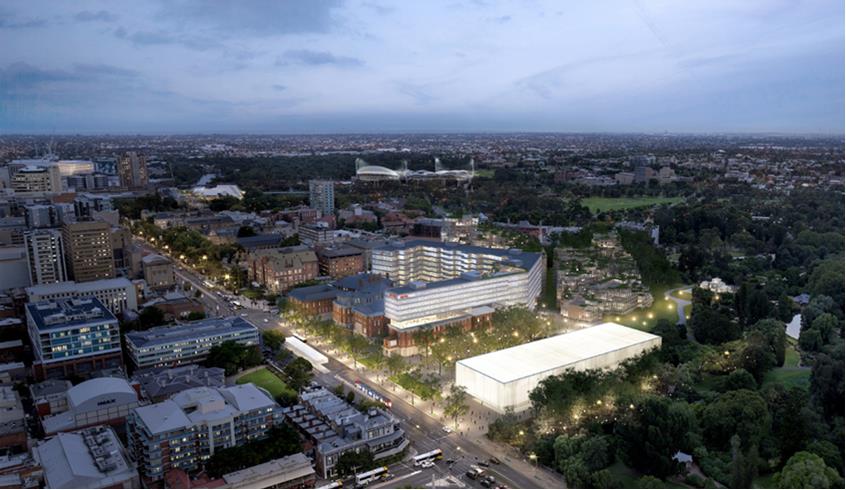 The white building indicates where a new contemporary art gallery would site on the site.

The document shows that the proponents have established relationships and prospective partnerships with a range of organisations.

“The Magnet” would develop close links with the new city high school, with the document saying students would be offered work experience and holiday programs “with the potential for inter-generational engagement and mentoring from residents enjoying the possibilities of Encore Living”.

Driverless shuttles are among the high-tech innovations pushed for the site, along with a focus on share cars and “on-demand mobility schemes” to allow for “lower parking capacity”.

The agedcare concept is described as “an integrated built form and service environment that will have clear export potential”.

“Smart homes, e-Health and wearable health technologies linked to innovative service providers, together with direct connection to the Knowledge and Innovation campus, will help to minimise the escalation of health care expenditure and redefine ‘Encore Living’, encouraging lifelong learning and new ‘seniorpreneur’ careers for active residents,” the document says.

A tram stop pictured on North Terrace near “The Magnet”.

Carbon neutrality will be a focus, including a collaboration with South Australian renewable energy companies Redflow, Heliostat and Suntrix.

Brookfield Infrastructure will “design, install, own and operate a central energy and recycled water plant, providing electricity, hot and chilled water, as well as recycled water to the precinct and beyond to assist Adelaide to achieve its Carbon Neutral target”.

The site will be home to a Global Centre for Carbon Neutral Cities, “potentially managed by the University of South Australia, to foster links between industry, universities and innovative research”.

“The Magnet will become a world leading living laboratory, a test bed for cutting edge technologies, systems and practices.”

“It comes on the back of a series of leaks against the Premier and Treasurer,” he said.

“Mr Weatherill was obviously rolled and the Government embarrassingly had to airbrush out major elements of the ORAH redevelopment project. Major projects are clearly at the mercy of factional games within the Labor Cabinet.”

Housing and Urban Development Minister Stephen Mullighan would not discuss the status of the document, however he did confirm to InDaily that Marriott was a partner in the John Holland/Commercial & General proposal.

“The inclusion of cultural institutions as part of the old Royal Adelaide Hospital redevelopment are still under consideration,” he said. ” The State Government has appointed a steering group of prominent Australians to consider options for a new contemporary cultural institution, including a preferred site and funding options.

“Various sites have been suggested, including the old RAH site, the Riverbank precinct and even outside the CBD at Port Adelaide. The Steering Group will assess the benefits and the hurdles and the State Government will consider their findings ahead of the 2017-18 budget.

“Global hotel company Marriott International has proposed a flagship 180-room five-star hotel in Adelaide’s East End as part of the redeveloped Royal Adelaide Hospital site and continues to be a partner in the Commercial & General/ John Holland proposal.” 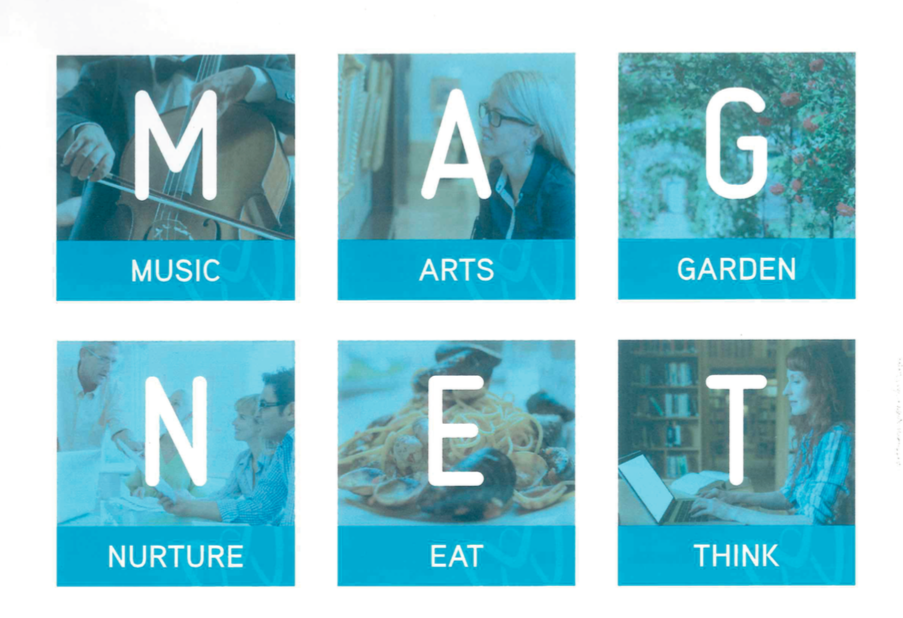 Detail from the leaked document, explaining “The Magnet” title. 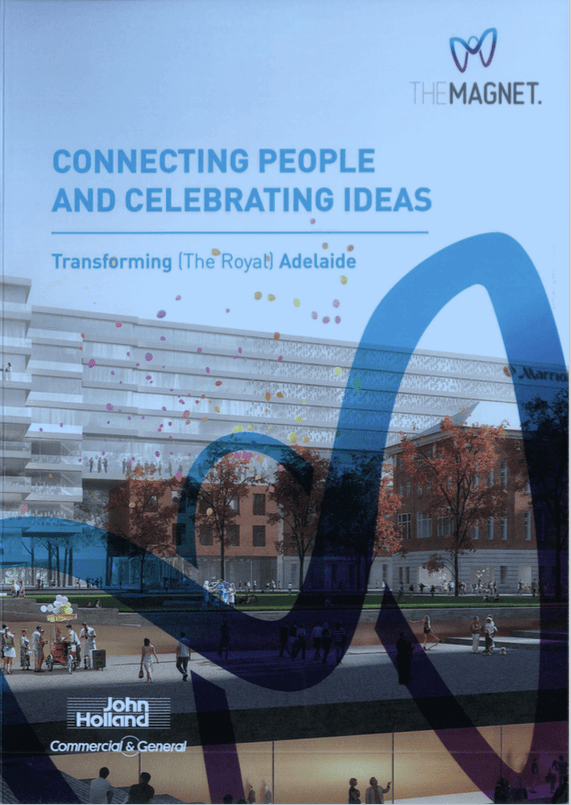 The cover of the leaked document.