This morning, Premier Jay Weatherill was keen to project a sense of calm about South Australia’s relationship with the US.

“South Australians can be reassured our state has had strong relations with the United States for decades and I expect this will continue under the new administration,” he said in a statement.

“Our ties with the US are about shared interests, primarily in the areas of defence and trade, and that is something which will endure into the future.”

But not everyone was so diplomatic as the news came in yesterday afternoon.

Bernardi told his Facebook followers last night that “the stunning election victory by Donald Trump last night is validation of all I have been warning about for many years”.

“The movement against the establishment political parties, who have consistently and wilfully ignored the mainstream majority in favour of their own power and self-interest, is moving across the globe.”

I feel sick. How can a thug who brags about sexually assaulting women get this much power? #AmericaDecides pic.twitter.com/uF0KFYUMD3

Hanson-Young this morning urged the Australian Government to abandon the Trans-Pacific Partnership Agreement trade deal in light of Trump’s election.

“This disaster of a deal was going to give international businesses the power to sue the Australian Government and drive up the cost of cancer medication,” she said.

Trump described the TPP as a “disaster” earlier this year.

The US/Australia alliance was built on shared values. If President-elect Trump trashes those values, we’ll need to rethink the alliance.

“The lesson from last night is this: if we allow globalisation to be managed in a way that benefits the few over the many, we are in trouble.

“This isn’t about protectionism, this is about understanding how a strong economy is a complex economy and that if we allow our manufacturing sector to hollow out, our living standards will drop — and that must not be allowed to happen.”

Pollsters, bookies & political pundits all get it wrong again. A bit like SA’s political elite proclaiming a Liberal victory in 2018 already

Daughter says: When Trump starts a war with Mexico, she’s backing her old friend Dora the explorer to win.

The US may have a new President but Ruby helping to bake my birthday cake is still the most important thing to happen today! #frozenismyfave pic.twitter.com/OmDZ8YRvBA

Labor MP, Speaker of the House of Assembly, Michael Atkinson:

Old convention that Australian political leaders should not issue statements about electoral races in allied countries has been vindicated.

For a US candidate to not speak to their supporters on the night of the election, win or lose, is poor form. At least show them respect. 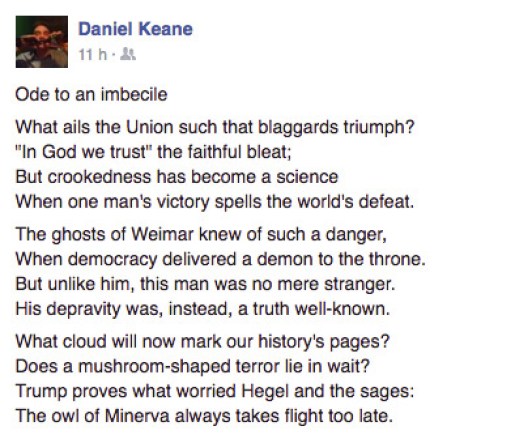 Anyone who says they couldn’t see this coming should have. People don’t like being told what to think.

Hoping those around President Trump can convince him to tone down this list of worrying promises… https://t.co/JpjmqlTqzK #ElectionNight

South Australians turned to the ABC to get their news of Trump’s shock victory.

ABC television’s 7pm news bulletin was the ratings winner of the night, attracting more viewers than any of the commercial services.