Rhino Room operator Mick Krieg told InDaily he’s determined to find a new home for the institution, though he’s warned – as other Adelaide arts space operators have found in recent years – finding a suitable new venue will not be easy.

Krieg said owners of the Frome Street building had told him that the Rhino Room, visual arts venue Urban Cow and bar/café Howling Owl would have to leave by May 2017.

As InDaily reported in July, a 36-storey hotel and apartment complex is planned for the land.

“We’ve given so many young performing artists … their start on their careers,” said Krieg.

“We provide an opportunity for various performing arts groups to so something a little different.

“We’d like the opportunity to find a great space which can continue to do the things that Rhino Room has done in the past.”

The Rhino Room is one of the Adelaide Fringe’s key comedy venues, and has hosted comedians such as Adam Hills, Hannah Gadsby, Stephen K Amos, Arj Barker, Felicity Ward and Fiona O’Loughlin.

Krieg said he hoped to find a new space in the East End of the CBD, in order to maintain the Rhino Room’s decades-long connection with the Fringe Festival.

But he said increasing residential development in the East End would limit options for a new space.

“It’s getting harder and harder to find appropriate spaces.”

He said he was particularly disappointed the 1850s building that houses Urban Cow would have to be demolished, and that it was unlikely all three arts institutions would be able to collocate in a new space.

“We’d look to relocate [Rhino Room, Howling Owl and Urban Cow] all together, but unfortunately I don’t think that’s possible.”

He added that: “At some point Adelaide may have to do a little more to help secure some of its attractions – otherwise we might end up losing them”.

“If the building has to go… the idea has to stay,” he said.

“It’s too lovely a tradition in Adelaide not to continue it – a really welcoming place, where you can be who you are as an artist. 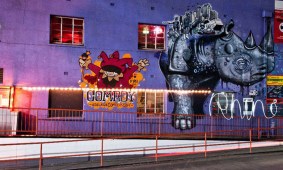 “We want you to do your own, original work. It’s been where everybody starts out for the first time.”

Egan said his organisation had been putting on comedy gigs at the venue since the 1990s.

“We’re still sort of coming to terms [with the fact that] we have to move out in May,” he said.

“I found my voice there.”

In a passionate post on social media this week, Egan told followers: “We know many of you will be as distressed as we are to find out this news and will want to know how to help.”

“We want you all to know that we are as committed as we were in the 90’s to provide a place like this for Adelaide Artists, as we have always done.

“Details will be announced soon on how you can help us make this transition.

“The Rhino will not go extinct.”