Property Investment Professionals of Australia (PIPA) chair Ben Kingsley says one and two bedroom units are facing headwinds from potential tenant shortages and large amounts of supply coming onto the market in the next 18 to 24 months.

He says houses, townhouses and villas in Brisbane, Adelaide, Canberra and Hobart, and some properties in Melbourne, offer much better potential returns on investment.

“I’d be avoiding apartments in medium and high-rise complexes in pretty much most of those areas,” Kingsley said.

PIPA’s 2016 Investor Sentiment Survey shows respondents are getting a bit wiser about unit versus house markets.

The proportion of respondents looking to buy apartments has fallen to 10 per cent this year, from 15 per cent in 2015.

However, more than 68 per cent of respondents looking to purchase in the next six to 12 months were planning to buy houses, townhouses or villas.

Kingsley said Brisbane is the most popular capital city market, despite its underperformance, due to its relative affordability.

However, he again cautioned against investing in apartments because Brisbane wasn’t yet a higher density area and residents were not used to living in units.

“They (Brisbane apartment investors) are up for some risks – in terms of properties not valuing at purchase price if they’re bought off the plan and potentially significant fire sales on rent to attract tenants so they can get some income in from that,” Kinsgley said.

The survey found Adelaide ranked behind Brisbane, Melbourne and Sydney as an attractive destination for property investment, but ahead of Perth, Hobart and Darwin. 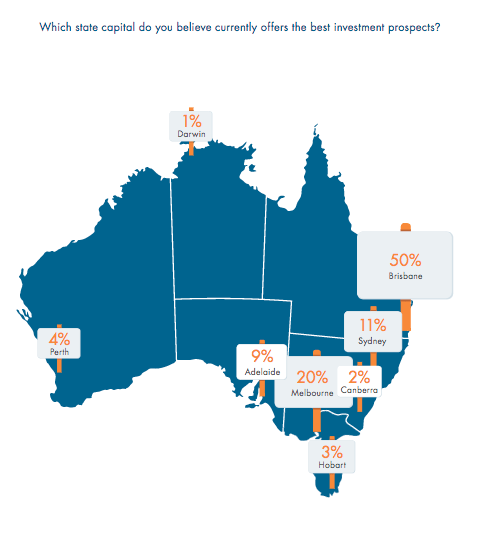 The PIPA survey, which covers responses from 1004 property investors, also showed only 13 per cent of respondents listed record low interest rates as their key reason for investing, while a mere two per cent cited negative gearing concessions as motivation.

“Most investors are playing the long game, 47 per cent of them are actually deriving an income from their portfolio,” Kingsley said.

“This whole argument is around negative gearing being a strategy; it’s not a strategy, it’s just a moment in time.”