The report argues that between $40 million and $60 million of turnover in the state’s power market since the beginning of June “can be attributed to monopolistic behaviour”. It claims there is evidence to suggest AGL has intentionally withheld electricity in order to achieve higher prices.

“There is a prima facie case that supply has been either withheld or withdrawn with intent to impact market price,” the report says.

It added that the behaviour of AGL’s Torrens Island power stations on July 7, 2016 – when wind power generation was very low and exchange on the interconnector into Victoria was constrained due to upgrading – “is suggestive of market power abuse”.

The report says that, overall, “the dependence on gas in times of low wind output, combined with the rising price of domestic gas and limited competition has added a significant cost penalty to South Australian electricity supply”.

“The recent withdrawal of [Alinta Energy’s] Northern [Power Station], combined with interconnector limits, increased market concentration to the point where economic withholding of supply would have been profitable for some generators,” it says.

“There have been long-running concerns over market power issues in South Australia.

“The evidence suggests that recent price spikes may in part be due to market power issues, rather than the underlying economic fundamentals.”

The report was authored by Melbourne University research fellow Dylan McConnell and Melbourne Energy Institute director, Professor of Geology Mike Sandiford. It was “supported” by the Australian Conservation Foundation and the Australian-German Climate and Energy College.

Campaigner for climate change activism movement 350.org, Josh Creaser, told InDaily: “It is disappointing to think that AGL could have deliberately manipulated the market to make millions in profits at the expense of South Australian power users”.

“If true, these actions undermine public confidence in renewable energy, by making it seem as though these huge cost spikes are caused by SA’s high reliance to renewable energy when in fact these massive price increases appear to have been driven directly by AGL’s manipulation of the market,” Creaser said.

“We call on the company to set the record straight, so the Australian people can understand the real factors behind the massive price hikes they’ve had to deal with in recent months.”

But an AGL spokesperson said in a statement that the recent high spot prices in South Australia had been “driven by a number of factors”.

“With the closure of the Northern Power Station, the state is now heavily reliant on gas generation.

“Through June and July there were significant constraints in the gas market particularly impacting gas-fired power in SA.”

A statement from the company that was released on July 7, 2016, said it had “acquired a higher than anticipated proportion of wholesale gas for the first quarter of FY17″ and that: “Given the unusually high prices prevalent in the spot market arising from strong East Coast demand, AGL expects a negative impact on its pre-tax wholesale gas margin in the first quarter of FY17 of approximately $35 million”.

The statement said that the company “expects the total pre-tax contribution to margin from its Energy Markets gas portfolio in FY17 to be lower than FY16 by at least $100 million, reflecting … slightly lower consumer market margins, including as a result of higher competition; and flat business customer margins”.

A table featured in the report reveals an alarming spike in high price events during July.

The Melbourne Energy Institute report claims the margins earned at AGL’s Torrens Island power stations and Origin Energy’s Quarantine plant would have increased significantly since June, and that “during this period, volume of sales also increased”.

“This is broadly consistent with an exercise of market power and extraction of monopoly rents.”

The report also attacks Snowy Hydro’s Angaston diesel power plant in the Barossa Valley, accusing it of withholding generation and “taking advantage of rules around the calculation of settlement prices”.

“We have identified 41 separate occasions in 2015 when withdrawal of Angaston’s output corresponded to increases in dispatch prices, with some driving the price to the market price cap,” the report says.

“Without those price spikes, the value of settlement price turnover would have been reduced by $30.3 million.”

However, a spokesperson for Snowy Hydro denied it withdrew supply in order to maximise price, instead suggesting it shut down the plant during the period mentioned in the report because “the forecast pricing was below our cost to generate”.

“Snowy Hydro takes into account a range of factors when deciding to operate any of its generation assets including demand, price, our operational and commercial considerations and other market activity,” the spokesperson said in a statement.

“When the forecast price turned out to be higher, we responded by switching the plant on and generating.

“Since that time we have voluntarily scheduled our South Australian plant, which means it is now dispatched by the market operator according to actual (as opposed to forecast) prices.

“It is important to note that Angaston constitutes only 50MW of generating capacity in South Australia and other, larger sources of generation were also not operating at the time.” 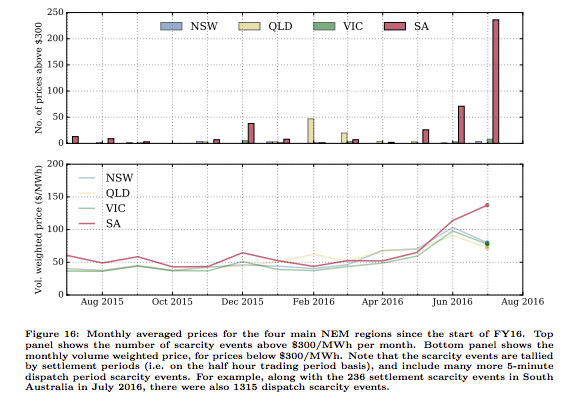 Graphs in the report show SA power prices have skyrocketed in comparison to other states since the closure of the coal-fired Northern Power Station.

A State Government spokesperson told InDaily the Melbourne Energy Institute report was “concerning and the Government has already asked ESCOSA [Essential Services Commission of SA] to investigate this issue”.

“Our power assets were sold to monopoly providers by the previous Liberal government in a move that stifled competition and locked in higher prices,” the spokesperson said.

“The best way we can increase competition now among energy generators is to reform the National Electricity Market and increase interconnection so that energy can be traded freely between states.”

Reform of the NEM will be discussed this Friday at a Council of Australian Governments (COAG) meeting of the country’s energy ministers.

“All states must work together through COAG to build a national energy market that can keep pace with changes in the way electricity is generated, improve security of supply and put downward pressure on prices for all users,” the State Government spokesperson said.

But the report does not spare government from criticism, arguing that the South Australian experience “provides a salutary forewarning of the havoc that can ensue from a lack of coordinated system planning in times of transition”.

It describes a “disorderly exit” of coal-generated power from the South Australian market.

Before the year 2005, South Australians’ homes were powered by a roughly equal mix of gas and brown coal. Since then more then 1500MW of wind capacity and 680MW of solar has been installed. Over the same period, 770MW of brown coal has exited the market, the report says.

The report criticises media reporting of the electricity price spike, describing it as having been “framed in ideological terms – renewables are either ‘good’ or ‘bad’ – with little reference to quantitative analysis of the dynamics of the wholesale electricity market, or movements in associated markets such as gas”.

“Up until 2016, increasing wind [power generation] … did suppress wholesale prices in South Australia,” the report says.

However, it says the increasing penetration of renewables into the South Australian market helped to force the end of coal-fired power generation in South Australia, which reduced electricity supply, reduced competition, and saw power prices rise.

It suggests increasing the use of renewable power generation with storage capacity.