Tori Anderson, who was on a Topdeck tour in the French resort city, said her group of about 20 students had made a last-minute decision to stop at Bastille Day celebrations on the Promenade des Anglais.

“We stopped our bus and thought we would just hop out and walk the rest of the way to our hotel and join in the fun,” she told the Nine Network today.

Five minutes later there was screaming and calls for people to get off the road.

“So everyone started moving and I turned around and behind me was this big truck,” she said.

The driver, believed to be a 31-year-old man of Tunisian origin, was swerving along the road pointing a gun out of the truck window.

The group and hundreds of other people were forced to jump onto rocks.

“People were laying flat like pancakes on the beach,” Anderson said.

One of the girls in the group was found lying in a pool of blood, which Anderson said was likely due to being trampled by the crowd rather than run over or shot.

The girl was taken to hospital with leg and arm injuries and slight concussion, but was okay, she said.

French police discovered the truck contained guns and grenades and are treating it as a terrorism investigation.

French President Francois Hollande said the attack was of a “terrorist character”.

“France has been hit on its national day, July 14, a symbol of freedom,” he said in Paris.

“It’s all of France which is under the threat of Islamic terrorism, so in these circumstances we must show absolute vigilance and a determination without end.”

Prime Minister Malcolm Turnbull has telephoned the Governor-General Sir Peter Cosgrove, who is in France for Bastille Day celebrations, and Australia’s ambassador Stephen Brady to get briefings on the latest developments.

“Our nations are united in freedom’s cause today, just as we were a hundred years ago,” he said.

Sir Peter said on Facebook: “On a day where Australians marched alongside their French counterparts, this cruel attack has struck innocents celebrating their national day.”

Perth tourist Katie Baronie Shaw said she and a friend had walked from a foreshore fireworks display to a nearby bar when the music stopped and gunfire rang out.

“We had no idea what was going on. Then all we could hear was gunshots,” Shaw told AAP.

“My friend just grabbed me and we all went out the back stairs and had to sprint out staying low with guys ushering us away from the foreshore.”

The 21-year-old, who arrived in the French Riviera city hours before the attack, said staff pushed everyone to the back of the bar and pulled down roller doors.

“We just sprinted, heads down. I’ve never been so terrified in my life.”

ABC producer David Coady said he watched from the promenade as the truck made its way towards the crowd.

“I thought it was odd, because it was in an area that had been shut off to all the pedestrians,” he told the ABC.

“That’s when screaming started, that’s when people turned and started to run.

“As I turned the corner to head away from the sea, or away from the promenade, that’s when I started to hear banging, some loud bangs.”

Another Australian identified only as Scott told the BBC it was “frantic”.

“We thought on Bastille Day it was better to be in Nice than in Paris,” he said.

“The natural thing is thinking it’s fireworks, but … this was after the fireworks had been completed.

“People ran through the streets, absolutely fearing the likelihood of getting shot.”

Contiki tours has confirmed it had six groups staying in the south of France, four of which were in Nice. 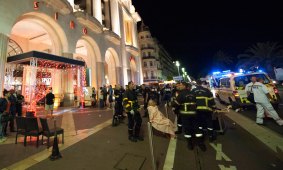 “We can report all passengers and staff have been accounted for and are safe,” the travel company said in a statement.

The anti-terrorist section of the Paris prosecutor’s office has taken over the investigation.

People with concerns for the welfare of Australian family and friends in the region should try to contact them directly, the Department of Foreign Affairs said today.