Last week, InDaily revealed the Department of Planning, Transport and Infrastructure had no documents to respond to an Opposition Freedom of Information request for the amount of Australian steel used in public infrastructure projects over the past five years.

Liberal MP Tim Whetstone seized on the revelation, demanding the Government conduct an audit of steel used in all major federal, state and local government infrastructure projects in the past decade “to identify opportunities for increasing the use of Australian steel in South Australia”.

But the State Government says an audit of Australian steel and concrete used in the Government’s infrastructure projects would “make no difference to use of steel in projects” because its use was already being “maximised”.

“This is a feeble attempt by the Liberal Party to divert attention from the fact that they have no local procurement or participation policies,” said the spokesperson, who added that the Opposition had “actively sought to undermine [the] Office of the Industry Advocate’s work in this area”.

“Our policy of maximising the use of local content, including steel and South Australian jobs, has been enshrined with the creation of the Office of the Industry Advocate – a position the Liberal leader has not only criticised but wanted to abolish,” the spokesperson said.

“We’ve worked closely with Arrium to use local steel on projects, including projects such as the Superway, duplication of Southern Expressway and other infrastructure projects. 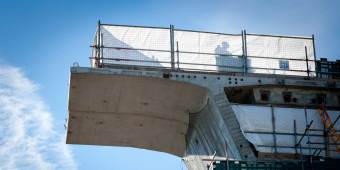 Govt has "no documents" on Aussie steel use in SA projects

“An audit won’t make any difference to use of steel in projects, as we are already maximising its use across our infrastructure projects.”

The spokesperson said Industry Participation Advocate Ian Nightingale had overseen a new system of ranking tenderers for Government projects, which featured a 90 per cent target for South Australian employees on several major recent infrastructure upgrades, including the O-Bahn extension.

Last month, the Greens introduced a Bill into parliament that would enforce a requirement for around 90 per cent local steel procurement in future projects.

Treasurer Tom Koutsantonis said at the time that it was “a wonderful compliment from Mr Parnell [SA Greens leader Mark Parnell] and the Greens that they seek to put Labor’s steel procurement policy into legislation”.