Rohrsheim told the crowd of about 180 Adelaide business people Uber’s carpooling service UberPOOL was soon to arrive in Australia, and hinted at more civil disobedience through UberX in Adelaide.

He joined Eikmeier and Brokensha in urging governments to “get out of the way” of business innovation, and recounted the company’s first run-in with government in the US, which led to its decision to adopt the name Uber.

“We received our first cease and desist letter from the Governor of California at the time, Arnold Schwarzenegger,” Rohrsheim told the audience.

The letter instructed the company, which was then named UberCab, to stop providing a cab service without a licence to do so.

So the rideshare company dropped the ‘cab’ suffix “And that was the moment Uber became Uber,” said Rohrsheim. 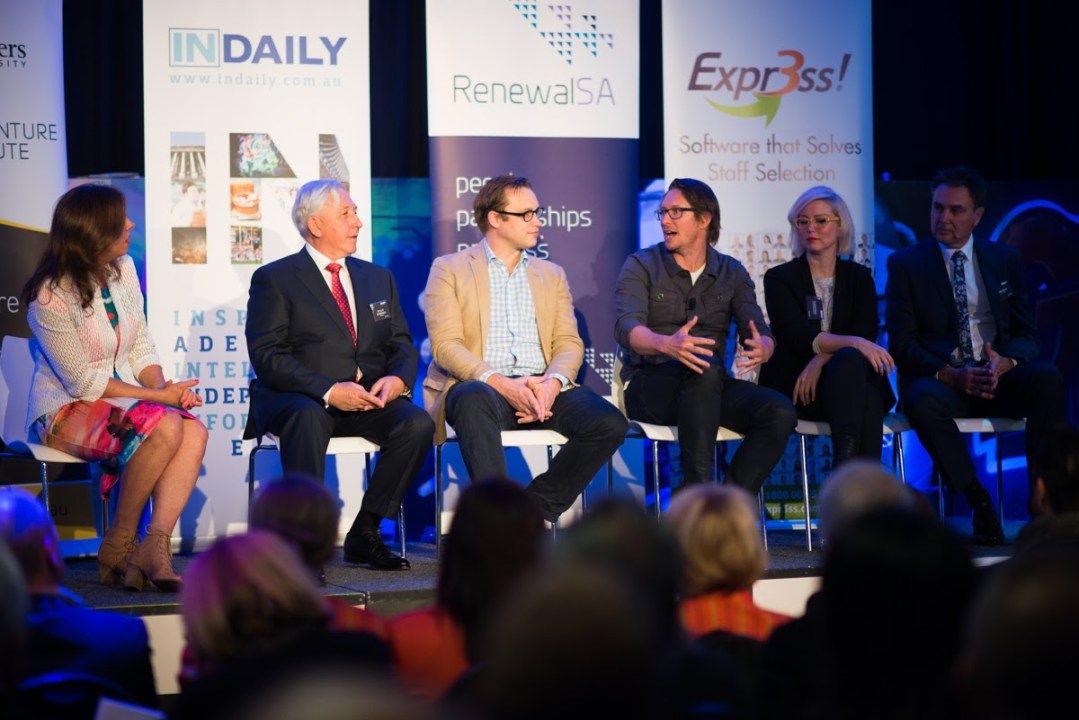 When Uber arrived in Australia, Rohrsheim said, the service was mostly used by a small number of family members and friends.

“There’s now well-over a million [passengers] but the first 100 users were pretty much family and friends. We’d get on the phone and say ‘hey mate, I don’t know where you are right now but you need to go somewhere else, and I’ve got an app that you can use to get there’.”

“We had the strong conviction that once people tried it once … and [had] seen the magic work – press a button, car shows up, drive from A to B – people [would] get addicted.

“So we’re generally pretty comfortable giving away that first hit for free.”

Uber executed the same strategy during its incursion into the Adelaide market in March this year, when, after public sabre-rattling with the State Government, resolved to roll out UberX for free.

Not long after that, Uber defied the Government by beginning to charge passengers for the service – which will not be legal until the law changes next month.

And Rohrsheim hinted that the company would be loath to comply with the State Government’s rules after July 1 as well.

“Entrepreneurs don’t need permission from the government to go and do their thing,” he told the audience.

“We want to give you the right assuming you’ve got a good driving record and a vehicle in safe condition, to give somebody else a ride.

“Now we’re facing a situation where the state wants to run background checks that might take months … whereas there’s a private company here in South Australia, that … can run the same checks overnight.

“And someone who’s unemployed can start making some money overnight rather than waiting months…. while government shuffles the papers.”

The Government has said it is currently performing “compliance checks” on drivers, but has not said whether it has sought any prosecutions.