Somebody dropped an election brochure for a Nick Xenophon Team candidate at Ian Dempsey’s place in Brighton.

Dempsey contacted the candidate and pointed out the injustice he felt he’d been done by her team leader, adding that there was no way he’d vote for an NXT candidate. Dempsey says she promised to take it up with Xenophon.

Monsignor Ian Dempsey is the priest Xenophon named in the Senate in 2011, when the politician aired an accusation that he raped fellow student John Hepworth at the St Francis Xavier seminary in Adelaide in the late 1960s and early ’70s.

At the time, Hepworth’s accusations and Xenophon’s naming of Dempsey received widespread publicity. Dempsey held one news conference to deny the accusations. He’s never granted a one-on-one interview to discuss the issue that had such a devastating impact on his life. Until now.

“He’s no knight in shining armour,” is the priest’s assessment of the incredibly popular politician.

“He’s shallow… I think thinking people see through him.

“He’s like Trump,” he says, reflecting on Xenophon’s propensity to champion populist causes.

While Dempsey says he’s “recovered” from the incident, he admits to being “all churned up” by Xenophon’s enduring popularity.

“It makes me angry,” he says of the constant reminders thrown up by Xenophon’s smiling face on roadside campaign posters.

“And when he comes on the telly I turn it off.”

Monsignor Dempsey, the Catholic Church’s parish priest at Brighton and Hallett Cove, in Adelaide’s southern suburbs, is particularly galled by three things: Xenophon’s “coward’s castle” use of the Senate to air the accusation and name him, his failure to properly canvass the other side of Hepworth’s story, and his refusal to apologise after Dempsey had been cleared by church, police and DPP investigations.

Dempsey was stood down from all ministering duties while those investigations were undertaken, and says he was humiliated by the “disgusting” allegations.

“I’m aware of my own weaknesses and strengths. It was a serious moral issue for me.”

He was also annoyed by Xenophon’s ready acceptance of the allegations levelled against him. 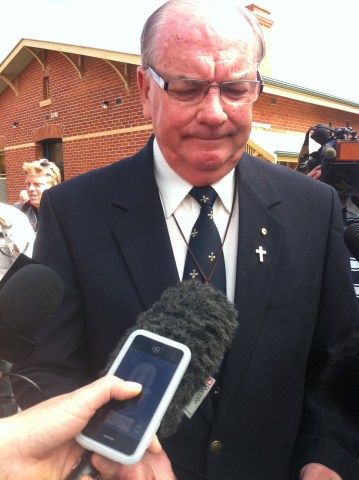 Dempsey’s own recollection of Hepworth at the seminary was as an “aloof character”. He denies any sexual contact between them, let alone rape.

Dempsey, the son of a policeman, was ordained in 1969, became a Navy chaplain and director-general of all Navy chaplains, service for which he received an Order of Australia citation. From 1995-2000 he was Vicar-General of the Diocese of Adelaide, before becoming the parish priest at St Joseph’s.

Hepworth, meanwhile, has seemingly been unsure of where he should practise his faith, having left the Catholic Church and eventually becoming primate of a minor Anglican off-shoot known as the Traditional Anglican Communion. Seven months after his claims against Dempsey were aired in the Senate by Xenophon, the other eight TAC bishops expelled Hepworth for alleged “financial irregularities” (allegations he denied). He’d been accused of the same issue at churches in Ballarat and Glenelg in the 1970s.

In a 2011 ABC radio interview, Hepworth addressed the historic allegations, saying of the former: “I had paid a personal account from the Church fund in an act of desperation. And there was a court case. And there was no conviction. But yes, I did that.”

Of the latter, he said: “What I was accused of apparently in Adelaide was some sort of financial thing.”

He said the Anglican church “got the then attorney-general Robin Millhouse to visit this bishop and said ‘well you know, say what the accusations are… say what happened… either charge him or stop’”.

“And I’ve still got the three-page report saying the bishop refused to confirm anything,” he said.

“And almost the same day the then Vicar General of the diocese wrote a substantial reference. And of course when I left the diocese, the day after I’d walked out on the Archbishop I got a letter from him granting me leave of absence and thanking me for all I’d done in the diocese. No mention of dismissal, as people are saying now, for anything like that.”

Dempsey was first informed of Hepworth’s allegations against him in 2009 and says that between then and Xenophon’s airing of them under privilege, Hepworth was interviewed eight times by then Vicar-General David Cappo.

In spite of this, Xenophon claimed the church had done nothing about the allegations and threatened to name Dempsey – which he subsequently did – unless the priest was stood down immediately.

Xenophon said at the time that “proper action by the church would have prevented any action by me”.

Dempsey was in the wilderness for a year before resuming full duties, a period during which he says he received “brilliant” support from Navy personnel and parishioners.

One of them is Graham Spurling, former managing director and CEO of Mitsubishi Motors Australia Limited, and former president and CEO of Pacific Dunlop in the USA.

“Ian Dempsey was unjustifiably publicly pilloried and defamed by an opportunistic politician… a populist,” says Spurling now of the toll taken by the way in which the matter was handled.

“I’ve never had a moment of doubt about Ian Dempsey’s integrity. He’s a significant priest, a real man of the world with a deep-down holiness.

“And the parish stood by him, dead-set solid. You could put money on Nick Xenophon not getting votes from the parishioners [of St Joseph’s].”

Now, Dempsey says, he’s “quite comfortable” with himself and his work.

“I forgive,” he says, “but I pray for truth and justice.”