FIVEaa – 891’s talk rival – has bounced back into double digits with gains across the schedule, including taking back the sports mantle from Triple M in the Drive shift.

In breakfast, 891’s Matt Abraham and David Bevan maintain a healthy lead over all comers despite losing 1.2 percentage points to fall to 16.1. In second place, FIVEaa’s Will Goodings and David Penberthy put on a huge 2.3 points to move to 13.3.

Nova put on listeners in every shift, opening up a big lead in Drive.

In the sports battle, Triple M’s Drive team of Andrew Jarman and Dale Lewis only had a brief moment to celebrate their previous victory over FIVEaa rivals Stephen Rowe and Mark Bickley.

With the AFL season in full swing, Rowe and Bickley have turned the tables to outrate Triple M 10.1 per cent to 9.8 per cent.

Overall, Nova was the leading station, followed by Mix102.3 – which did well apart from a drop in breakfast – with previous leader ABC 891 in third place. FIVEaa leapfrogged Triple M into fourth place.

891 lost ground in all shifts apart from mornings, where newcomer Ali Clarke held her own. 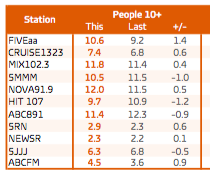