The Government will allow UberX and similar ride-sharing services from 1 July this year, but Uber told The Advertiser in an article published today it wouldn’t be entering the South Australian market.

Weatherill today described that threat as “posturing” and “propaganda”, predicting that ride-sharing would be available to South Australians from July – whether from Uber or a competitor company.

Adding weight to Weatherill’s claims is the fact that an Uber representative yesterday attended a meeting of a new ministerial advisory body, convened by Transport Minister Stephen Mullighan as part of his reforms to the taxi industry.

The Government says that at that meeting the company gave every indication it would be offering UberX services in South Australia.

Weatherill told FIVEaa today that “they had  a negotiation with us yesterday where they were openly talking about coming on in the first of July”.

“Obviously they’re trying to put a bit of pressure on us publicly by having a splash in the paper, but that won’t work,” he said.

Uber’s director of public policy Brad Kitschke, who attended the advisory group meeting, denied that the company gave any indication about if and when they would begin operating UberX services in Adelaide.

He told InDaily he had raised issues in that meeting that had been concerning Uber for some time, including the cost to drivers of starting up in South Australia and the length of time it took for the Government to process police checks.

Kitschke also revealed that he would be meeting with Mullighan today, in what could be a fiery encounter.

“We will not be launching (in South Australia) under the current regulations as they stand,” Kitschke said.

“We will have to consider our position after meeting with the minister (Mullighan) today.”

The Premier encouraged competitors to Uber to enter the South Australian market if the cashed-up giant decided to follow through with its media-delivered threat.

“I mean this opens it up for a South Australian company to use the same technology, to actually come in and open up their own operation,” he said.

Uber and fellow ride-sharing company GoCar, founded by South Australian Ned Moorfield, are both concerned about the cost to drivers of setting up in South Australia and also the predicted time for the Government to process applications, particularly police checks.

“I can’t say absolutely we won’t be in the market, but there’s a bit more work to be done on this one,” he said.

He said GoCar had only started in Sydney two months ago, so probably wouldn’t be ready – in any case – to launch in South Australia by July.

Uber argues that South Australian start-up fees would be more than $800 – considerably higher than those interstate where ride-sharing is allowed – and that the process of police and medical checks, CTP changes, and accreditation processing would take a minimum of six weeks, and possibly up to four months.

Weatherill disputes that figure, saying that the cost difference between ACT and South Australia was only $100 per annum. It was “a couple of hundred dollars” more expensive than NSW.

“But we’re not prepared to compromise our standards,” he said.

“We’re going to make sure that if you’re working in a taxi alone with a vulnerable person that you have the appropriate police checks.”

Uber released a table (below) showing the relative costs in Australian jurisdictions for Uber drivers – figures that the Government contests.

The State Government ridiculed the table, releasing its own figures for the ACT, showing about a $100 differential. 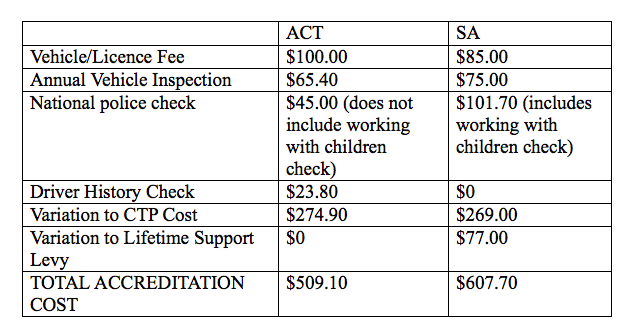 The Government also added that the cost of registering a car in the ACT was considerable higher than in SA.

Kitschke said the SA Government process for police checks was inefficient, and he wanted the Government to give Uber drivers free processing if it took longer than 10 days.

He wrote to Weatherill on 14 April about his concerns, but says he did not receive a reply.